Trump’s Semi-Withdrawal From Syria: How Not To End Endless Wars 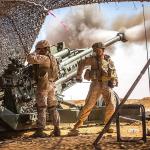 (Portside Moderator: According to NBC News, on Monday President Trump said he would leave US troops in eastern Syria to seize the oil and in southern Syria at Israel’s request. )

In defending his decision to withdraw troops from Syria, President Trump explained, “I ran on the basis we’re going to bring our great soldiers back home where they belong. We don’t have to fight these endless wars. We’re bringing them back home.”

But the disorganized, chaotic movement of 28 service members out of one base in northern Syria is not what most advocates of ending endless wars had in mind. We agree that there are too many so-called “experts” who envision a permanent posture of interventionism and military occupation and too big a military-industrial complex that profits from it. These groups are unlikely to support any restraint or reduction in our global military presence. But they are not representative of the population, a majority of which wants to terminate the “War on Terror” operations in Afghanistan and the Middle East.

Still, we have a moral obligation and a strategic interest in ensuring that the removal of our troops and the cessation of offensive operations do not lead to unnecessary security risks and human suffering. To successfully wind down our era of global military domination, political leaders must put to use the tools of peaceful cooperation:

The goal is to end the war, not just our participation. The State Department should encourage and participate in multilateral negotiations, being sure to include civil society representatives, not just political elites. Political leaders and the American public must not expect total capitulation of the other side at the bargaining table, instead recognizing that no party will achieve all its objectives through diplomacy – just as they could not through force.

Unpredictability and secrecy usually lead to chaos, as has been amply demonstrated in Syria. At a minimum, the United States must inform its allies of its intentions far enough in advance to allow them to take the necessary steps to protect themselves and adjust to the new reality.

Major moves like a military withdrawal take months of careful planning in order to anticipate potential challenges and reduce potential harm. This means not only military planning for the disposition of troops and materiel, but also diplomatic and political planning for short-term civilian protection, refugee and humanitarian aid and conflict mitigation, as well as long-term peacebuilding.

Negotiation, consultation, and planning must be part of a larger vision for the American role in the region and around the globe going forward. Simply shifting troops around from one crisis to the next is not a strategy. Pulling back a few troops in Syria while deploying an additional 1,800 troops to Saudi Arabia while continuing to participate in the brutal Saudi-led war in Yemen suggests something far less ambitious than a strategy to “bring our great soldiers back home.”

The best way to end endless wars is not to start them. The catastrophic invasion and occupation of Iraq has emboldened Iran and unleashed a torrent of escalating violence: the emergence of ISIS, the civil war in Syria, the globalization of the war on terror. Around the Middle East, the law of unintended consequences is on full display.

Compliance with the Constitution and international law

Three presidents have now used the 2001 Authorization for Use of Military Force – originally intended to authorize the war against al Qaeda and the Taliban in Afghanistan — to justify 41 operations in 19 countries, with minimal congressional oversight or involvement and often in violation of international law. The public does not want to be involved in these wars, and Congress should not fund them without an open, public debate and vote.

None of these steps were taken in Syria. The United States declined to seek a negotiated solution to the civil war there because it was bent on achieving regime change. The president announced the sudden repositioning of troops without consulting allies, paving the way for a strategic disaster. Civilian and military planners were not given an opportunity to chart a course that would ensure humanitarian access, prevent the slaughter of partner forces, and mitigate the risks of leaving ISIS prisoners unattended. No clear strategy or set of policy objectives for Syria or the region as a whole is in evidence. As fast as the administration is removing troops from Syria, it is adding them in Iraq, Kuwait, and possibly Jordan, all the while issuing threats and escalating tensions that could explode into war with Iran. Congress has chosen neither to authorize the military presence in Syria nor to prohibit it, condemning the withdrawal without offering a constitutionally-valid alternative.

Under these circumstances, the president is giving “ending endless wars” a bad name. We can’t let this experience tarnish the moral and rational arguments for ending these wars properly and with forethought.