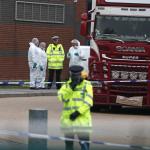 A new and horrific immigration-related tragedy in the UK has turned into one of the largest murder investigations in the history of the country. Thirty-nine bodies were found during the early hours of Wednesday in a trailer with Bulgarian license plates parked at Waterglades Industrial Park in Grays, a town in Essex, in an industrial area on England’s southeastern coast, adjacent to the Thames and bordering Kent. The dead include 38 adults and a teenager.

The area was immediately surrounded by police and camera crews, while the truck was towed away by the police to recover the bodies and begin the investigations. The police have stressed that it will likely take a long time to identify the bodies. The driver of the truck, a 25-year-old man from Northern Ireland, has been arrested. It was a refrigerated trailer, built to store its cargo at a temperature of -25 degrees Celsius. The trailer cab appears to be owned by an Irish company. A spokesman for the Bulgarian Foreign Ministry said that the victims were not Bulgarian; it was later confirmed by British police that all the victims were of Chinese origin.

At the moment, investigators are trying to reconstruct the path the vehicle took. It was initially thought that the trailer had landed in Wales, on the northwest coast of Britain, coming from Dublin. Later, however, the police confirmed that it had left from the commercial port of Zeebrugge in Belgium and arrived at the port of Purfleet, in Essex, not far from where the chilling discovery was made.

This is certainly an unusual route for a trailer coming from Bulgaria. However, with Dover and Calais having been turned into open-air prisons—with cement, surveillance cameras, barbed wire and dog patrols—such a circuitous route is understandable, although it has not yet been definitively confirmed that the trailer actually originated in Bulgaria. The ports involved are small and deal almost exclusively with freight, so they certainly don’t feature the sophisticated security measures adopted by the major ports. At Dover and Calais, after a bloody string of accidents and traffic slowdowns, law enforcement have begun scanning all vehicles in transit with devices able to detect a human heartbeat.

This is yet another chapter of the drama of migration and self-segregation into which Europe is retreating. The UK is often seen by migrants fleeing war and hunger as the most coveted of all European destinations, and such tragedies are not new: on June 18, 2000, 58 lifeless bodies of men and women of Chinese ethnicity were found on another truck in Dover. They had died from asphyxiation, and only two young men survived. The victims had paid thousands of pounds to a criminal organization to “cross over”; the truck driver, a Dutch national, is still serving a sentence with a minimum of 14 years in prison. The investigation established that the victims had been desperately calling for help, pounding on the trailer walls as they ran out of air.

In a statement, Amnesty International condemned the UK’s immigration policies: “This is a heartbreaking and horrifying incident,” said Steve Valdez-Symonds, Amnesty’s refugee and migrant rights director for the UK. “People who are forced to take dangerous and sometimes fatal passages to reach the UK often do so because current immigration policies and practices deny them safe and legal options.”

One can expect the usual ranting on the right about “insufficient checks,” although the checks themselves are the direct cause of such desperate choices. The right-wingers’ reaction is simply to condemn the criminals who are organizing the transports, as if they were the only real problem. Jeremy Corbyn, reacting to the news in Parliament on Wednesday, invited the other MPs to reflect on the victims’ plight: “Can we just think for a moment of what it must have been like for those 39 people, obviously in a desperate and dangerous situation, for their lives to end, suffocated to death in a container?”