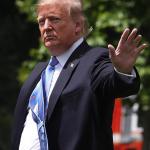 Attorney Richard Painter, who served as the chief White House ethics lawyer in the George W. Bush administration, warned on Thursday that President Donald Trump appeared to be committing "felony bribery" by giving Republican senators fundraising cash ahead of an increasingly likely impeachment trial in the Senate.

The lawyer shared an article published by Politico on Thursday morning. Titled "Trump lures GOP senators on impeachment with cold cash," the article outlined how the president is turning to his large network of donors to raise funds for a few senators facing difficult re-election campaigns in 2020. All of those senators have also signed a resolution condemning the Democratic-led impeachment inquiry.

"This is a bribe. Any other American who offered cash to the jury before a trial would go to prison for felony bribery. But he can get away with it?" Painter, a law professor at the University of Minnesota, wrote on Twitter. "Criminal." 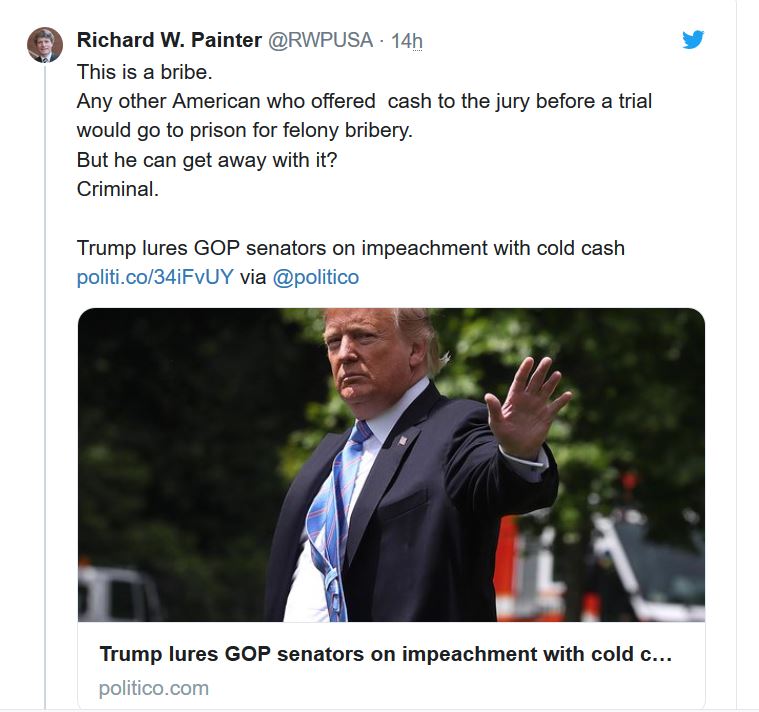 In a follow-up tweet, Painter argued that GOP lawmakers who accept the fundraising support should face criminal charges as well.

"The senators can raise their own campaign cash. Any senator who accepts cash from @realDonaldTrump before the impeachment trial is guilty of accepting a bribe and should go to the slammer," he tweeted.

The House of Representatives on Thursday will vote on a resolution, which is expected to pass the Democrat-controlled body, to outline the formal impeachment inquiry rules. The resolution will allow for public hearings and the release of transcripts of closed-door depositions. This is not a vote to impeach the president, which is expected to come later after the public hearings. As things stand now, most lawmakers and analysts believe the president will be formally impeached by Congress' lower chamber.

After that, the Senate will be required to take up the inquiry and carry out a trial for the president. As the upper chamber is Republican controlled, it is considered highly unlikely that Trump will be found guilty and removed from office. The president's removal requires a two-thirds majority vote, and the Senate is made up of 53 Republicans, 45 Democrats and two independents, who caucus with the Democrats.

None of the Senate Republicans have publicly stated that Trump's actions have amounted to impeachable behavior, but several have expressed serious misgivings and raised concerns.

"The question on the table is impeachment, and that's the question we should get an answer to, and the answer so far is 'For what would we impeach the president?'" he said. "And the answer is 'I don't see anything for that.'"