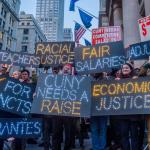 Over the past year and a half, the US has seen a revival of the strike. While increasingly drawing in workers across the public and private sectors, educational workers have been at the center of the new strike wave. Starting with the illegal and unofficial West Virginia public school teachers’ strike in February 2018, education workers in both K-12 and higher education have withdrawn their labor and forced bureaucrats and politicians across the US to raise wages, reduce class sizes and improve the working and learning conditions of both teachers and students. The wave continues with the Chicago Teachers Union’s strike for demands that include improved services and housing for their students. Education workers continue to chart the path out of the four decades long decline of the US labor movement.

The rebirth of militancy has had important echoes in one of New York’s largest and most ‘progressive’ education unions—the Professional Staff Congress (PSC), the AFT local representing approximately 30,000 part-time and full-time faculty and professional staff at the City University of New York (CUNY). The current PSC leadership swept to office in 1999 as a reform movement—the New Caucus—promising a union that would combine workplace militancy with a political agenda that defended the interests of our students and working people generally in NYC.

In the negotiations for a new contract, the PSC prioritized obtaining salary equity for the over 10,000 part-time faculty who teach nearly half of all courses offered at CUNY.  The large pool of underpaid adjunct faculty has allowed CUNY to keep the salaries for all faculty and staff among the lowest for public university faculty in the US. For this contract, the PSC demanded a minimum salary of $7,000 per semester for a three credit course (the average at the university). A $7K minimum salary would allow an adjunct faculty member teaching the maximum number of credits under our contract to earn the equivalent of a full-time Lecturer. By raising the price of part-time contingent labor, we hoped to force CUNY management to begin hiring even more full-time, tenure-track faculty.

While the PSC’s leadership is heralding the new proposed contract as “historic” in its gains for part-time faculty, the reality is very different. There are many features of this contract that can and should be criticized, I want to focus on three key points.

First, the over-all raises are grossly inadequate. The PSC ended up accepting management’s initial salary offer of 10.41% over 69 months. Given that the cost of living in NYC has historically increased at a rate greater than the national average of 2% per year, this salary package will likely not keep up with inflation. The only hope for faculty and staff to get ahead of inflation are the annual step-raises based on longevity—which, as we will see, will be eliminated for part-time faculty in August 2022. In addition, the contract contains a 10 month pay freeze. While the contract expired in December 2017, the 2% retroactive pay only goes back to October 2018.

Second, the “major” gains in part-time faculty salaries are, for the most part, an illusion. Salaries for Adjunct Lecturers, who make up 70% of the part-time faculty, will rise to 5,500 by August 2022 for a three-credit course. Not only is this well below the $7,000 per course needed to establish pay equity within CUNY, but it is significantly below what some private universities in NYC are paying as a minimum wage.

More ominously, the salary increases come with a substantial increase in workload. A few months  ago, the PSC leadership announced it was changing its bargaining strategy to achieve $7K—demanding payment for 6 contact hours for every 3 hour course, with the additional 3 contact hours being unsupervised. The new contract will compel part-time faculty to hold supervised office hours—which can also be used for mandatory “training” sessions for part-time faculty.  Put simply part-time faculty are getting a little more pay for a lot more work—a dangerous precedent for all PSC members.

Finally, the contract contains important concessions despite the leadership’s claim that there were “no give-backs.” First there is the 10 month pay freeze. The tens of millions of dollars of our salaries that CUNY management saves will fund some of the illusory “gains” in this contract. Second, salary steps for part-time faculty will be replaced by a single pay scale in August 2022—locking in salaries for Adjuncts that will not keep up with inflation.

Finally, untenured faculty have lost some of their reassigned time. The CUNY contract had provided 24 hours (nearly a full year) of reassigned time for untenured, full-time faculty to pursue the scholarship necessary to receive tenure. Six of those hours will be given only after junior faculty receive tenure. While time off for scholarship is a crying need for all faculty at CUNY, it should come at the expense of management, not other members of the bargaining unit. This is especially damaging for untenured faculty who are under the greatest pressure to “publish or perish.”

Some of our leaders have already told us that “bargaining involves some give and take.” This is a bit bizarre from a leadership that publically proclaimed its desire to “end austerity at CUNY!”

Ultimately, the PSC leaderships’ failure to break the constraints of austerity was not a matter of personal failings, but a self-defeating strategy. Despite claims to the contrary, the PSC prioritized lobbying and influencing city and state elected officials over mobilizing the social power of our membership, our students and the communities we serve. Campus based and city-wide mobilizations were episodic—too few and far apart to build real momentum. They were called in response to either deadlocks in negotiations, or the pressure exerted by the independent organizing of full and part-time faculty and staff in the “$7K or Strike” movement.

The leadership consistently failed to present activists with a real plan for a contract campaign—one which involved broadening and escalating actions that would have posed a credible threat of a strike. Without such a mobilization and strike threat, there was no way we could force CUNY management and city and state officials to increase funding for our contract and our students’ education.

What should PSC members do now? First, we should vote no on this proposed contract. We need to send the leadership a strong message that we are not satisfied with more austerity contracts—wages that fail to keep up with inflation, the continued reliance on part-time and contingent labor, and more concessions.

Some members are worried that the only alternative to accepting yet another bad deal is an immediate strike. Clearly, the PSC membership is not ready to strike. But voting down the proposed contract is a signal to the leadership to do what they should have done two years ago-- develop a real contract strategy based on mobilization of our members and allies.

The first step could be preparing for a strike authorization vote early in the Spring 2020 semester. Preparing for a strike authorization vote would require intense, one-on-one organizing to win over faculty not yet convinced of the need to threaten to withhold our labor. It would also involve campus actions-- “Red for CUNY Ed” t-shirt days, teach-ins with students, and informational picketing. City-wide, the PSC could initiate a petition/post-card campaign to demand increased funding for the university, while organizing large, noisy and disruptive demonstrations at CUNY Board of Trustees meetings and the offices of Governor Cuomo.

A strong strike authorization vote—like the one we organized during the last round of contract negotiations—would put the CUNY management and city and state officials on notice that we are ready to join education workers around the country in illegal strikes.

Clearly, there is no guarantee that a well-organized and mobilized PSC membership could win a strike. However, without posing a credible threat of a strike, we are guaranteed to continue the downward spiral of salaries and working-learning conditions we have experienced over the past four decades of austerity bargaining. The status quo cannot last—failure to achieve equity will further alienate part-time faculty. In the post-Janus world, this could lead to a hemorrhaging of members and a profound weakening of the PSC.

[Charlie Post is a long time socialist who teaches sociology at the Borough of Manhattan Community College-CUNY. Over the past twenty-five years, he has served as a member of his PSC Chapter’s Executive Committee, a member of the PSC Delegate Assembly, and his campus’ Grievance Counselor (shop steward). Post was a founding member of the New Caucus-PSC.]