How Top 2020 Democrats Are Trying to Win Over Union Members 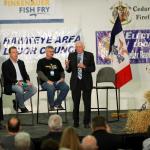 Bernie Sanders lives 1,100 miles away in Vermont but, sharing a stage with three union leaders and four bales of hay at a racetrack amid Iowa cornfields, he couldn't have been more at home.

"Let me thank you all for being here, my union brothers and sisters," the Vermont senator bellowed, as some in the audience leapt to their feet, hollered and waved Sanders 2020 signs.

With his deeply progressive platform and unapologetic calls for a political revolution from the bottom up, Sanders' natural constituency has long been working Americans. In 2016, he managed to appeal to many local labor groups and the rank-and-file of national unions, even as their leadership often backed the more-establishment Democratic primary choice in Hillary Clinton.

With 2020's first-in-the-nation Iowa caucuses less than three months away , Sanders is counting on his message to again resonate with union members — but has even stiffer competition this time to win them over.

Massachusetts Sen. Elizabeth Warren is promising "big structural change" within the existing political system that can buoy everyday Americans at the expense of the rich. Former Vice President Joe Biden, meanwhile, has longstanding relationships with many powerful unions and is betting his personal charisma can woo them, even if his more-moderate proposals may not energize all of their members.

"It might come down to between Joe, Bernie and Elizabeth," Lon Kammeyer, a 70-year-old from Waterloo, Iowa, who is the community organizer for the Amalgamated Transit Union and was a fan of Sanders' in 2016. He now says he won't decide who to support this cycle until his union votes on a formal endorsement.

"What they all need to do," Kammeyer said, "They need to speak out for unions."

With an economy dominated by agriculture, Iowa is rarely associated with unions as much as states like Michigan, built for decades on manufacturing. About 8% of Iowa's workforce belong to unions, less than the national average, but membership increased in 2018 as compared to the previous year for the first time since 2010, according to the Bureau of Labor Statistics.

And Democrats see an opportunity to make inroads since the Republican-led Legislature in 2017 voted to reduce collective-bargaining rights for many public employees.

That "awakened people who may have been taking their wages and benefits for granted about how vulnerable they now are," said Mary Kay Henry, president of Service Employees International Union.

Many of the country's largest unions have yet to make 2020 endorsements, though Warren secured the support of the Working Families Party, the labor-aligned progressive group that backed Sanders in 2016. Biden began his presidential campaign with the International Association of Fire Fighters choosing him.

The push to appeal to labor was on display this weekend at a Cedar Rapids fish fry hosted by Rep. Abby Finkenauer, the second-youngest woman ever elected to Congress and a union favorite in her eastern Iowa district. This swath of the state includes many counties that supported Barack Obama but swung to Donald Trump in 2016.

Inside a Hawkeye Downs expo hall thick with the odor of cooking walleye, top Democrats took the stage one-by-one, trying to win over a heavily union crowd. Sanders proclaimed himself the most pro-labor member of Congress, and, in a nod to his surroundings, proclaimed, "I come from one of the most rural states in America and we have nothing to be ashamed about in rural America."

Biden, too, said he was one of the most pro-union members of Congress during his long Senate career, telling the crowd, "I know I've been criticized at the front end: 'Joe's too pro-union,'" to which some Sanders supporters shook their heads.

Still, fire fighters were out in force for the former vice president, especially when Biden said that unions help workers retain basic decency against wealthy interests determined to roll over them: "You are the ones who keep the barbarians from the gate, man."

Then there was Warren, who tells audiences all over the country that her brother, a retired crane operator, owes a solid pension to his union membership.

Henry, the service employee union president, said that, nationally, there were more 2018 strikes and lockouts than during any year since 1986. Sanders, Biden, Warren and other Democratic presidential hopefuls have joined picket lines — including demonstrating with United Auto Workers at a General Motors plant in suburban Detroit and with Chicago teachers .

"This is an entirely different moment in the presidential campaign because we're seeing candidates respond to the demands of workers and how are they going to fix an economy that, when you work for a living, you can't even feed your family," Henry said.

Sanders campaign says it has used its contacts list to send hundreds of thousands of emails and texts urging supporters to attend union-led strikes around the country, as well to back protests of employees at companies like Amazon.

On one of the race's key issues, health care, Sanders and Warren support universal insurance coverage under a "Medicare for All" plan. But both have included caveats to protect existing health coverage that was collectively bargained. Biden supports a "public option" to compete alongside private insurance.

Teresa Glover, 49 and from Dubuque, Iowa, listened to all the candidates attending the fish fry, but said she's long since settled on Warren despite her husband, who works in insurance, potentially losing his job if Medicare for All becomes a reality.

"She seems genuinely happy and excited to be applying for the job," Glover said of Warren seeking the presidency.

Kammeyer, the community organizer who walked the fish fry with a jacket emblazoned with the nickname "Mr. Union," said he has had a chance to meet top Democratic presidential candidates at various, small meetings at union halls around Iowa.

"Biden will walk up to you on the street and talk to you," Kammeyer said, noting that Sanders and Warren are similarly approachable. "But 45 (Trump)? If he died, I wouldn't tinkle on his grave. I don't want to wait in line that long."