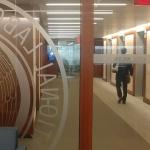 The federal agency responsible for protecting private sector workers’ union rights is engaging in union busting against its own employees, according to career staffers staging a protest at National Labor Relations Board headquarters Nov. 18.

Members of the NLRB Professional Association and the NLRB Union are rallying outside agency headquarters in Washington’s Navy Yard to protest what they describe as “management abuses” by board Chairman John Ring (R) and General Counsel Peter Robb. They say agency leaders have deviated from decades-long practices in their relationship with two internal unions, and have gone further than required in implementing two executive orders that were issued by President Donald Trump.

“This is an agency dedicated to promoting collective-bargaining and protecting workers right to organize, so it is especially shameful to see our leadership engage in such blatant conduct,” NLRBPA President Karen Cook said in a statement. U.S. Reps.Rosa DeLauro (D-Conn.) and Jan Schakowsky (D-Ill.) joined the workers in support of their protest.

Those orders made it easier to fire federal workers and curtailed their union activity. The Environmental Protection Agency and Housing and Urban Development Department are among other agencies that have clashed with employee unions over efforts to implement the orders.

“As a government agency, we are complying with the executive orders, which are in effect,” NLRB spokesman Edwin Egee told Bloomberg Law Nov. 18. “We are negotiating the impact with our unions.”

The NLRB first eliminated both unions’ "statutory right” to have officers get paid for time spent representing their colleagues in matters concerning their working terms and conditions, the unions said in a statement. Agency heads “subsequently prohibited the unions from using any government property (offices, computers, email, phones, etc.) to conduct union business,” despite that both practices had been allowed for years, according to the unions.

The NLRB denied that it has banned the unions from using “official time,” or paid time for union work.

The labor board’s current leaders have been described as anti-labor by worker advocates, and accused of working to gut the public’s ability to file unfair labor practice charges by a number of its own staffers. Agency employees have staged at least two protests in the past two years, an infrequent move by government bureaucrats.

Union representatives say their latest protest effort is more coordinated than before—staffers in at least one regional office in Washington state are also rallying—and is a response to Ring and Robb’s implementing the Trump administration’s EOs in a sweeping fashion without first negotiating with the employee organizations.

The NLRB Union represents employees at the agency’s 40-plus field offices across the country, and the NLRBPA represents mostly professional staff at headquarters.

Staffers related their action against the EO implementation to the agency’s failure to spend the full amount of its budget in each of the past two fiscal years, saying that both moves are part of a general attack on federal employees as well as private sector workers’ union rights. NLRB Union President Burt Pearlstone said after DeLauro’s speech that he believes agency leaders intentionally refused to spend their full allocation.

The agency has justified personnel cuts and certain other moves made before the EO implementation by citing budget cuts proposed by the White House, although Congress ended up rejecting those proposals. General Counsel Robb recently said the NLRB has requested legal authority to hold onto budgeted money that it doesn’t spend in future fiscal years.

DeLauro, a member of the House Committee on Appropriations and chair of its subcommittee on labor agencies, told Bloomberg Law that Democrats plan to look into any budget improprieties at the agency—an issue the Government Accountability Office also investigated last year.

“It’s a misuse of funds,” DeLauro told Bloomberg Law about the unspent monies in the previous two years. “We’re taking a very hard look into all that.”