Unionizing L.A. Bus Workers and Their CEO Come Together Over Fighting Climate Change 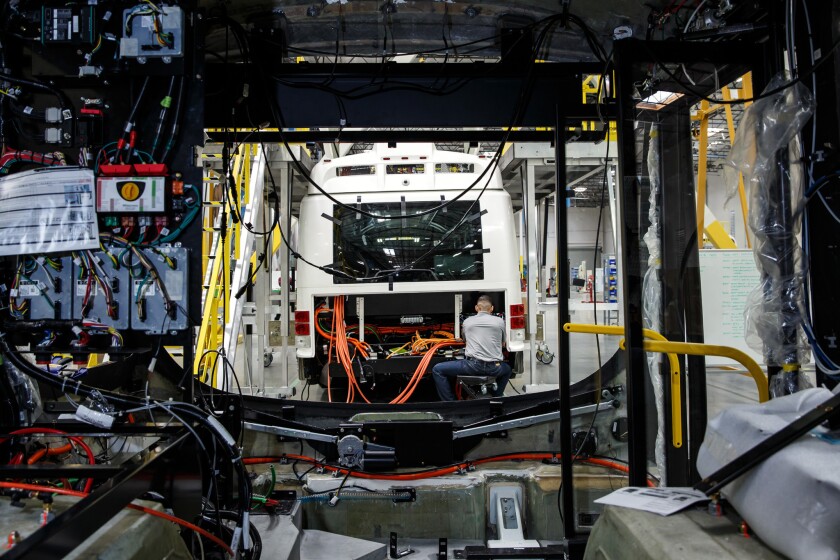 Proterra workers assemble an electric bus in their City of Industry plant.

Blanchard Pinto, a supervisor on Proterra’s electric bus assembly line in City of Industry, had never considered joining a union in his nine years with the company.

That changed on the day before Halloween, when his bosses invited him and his co-workers to a meeting with the United Steelworkers Local 675.

Pinto was wary at first. In his experience working for other companies, management usually tried to avert unionization at all costs. On top of that, the majority of Local 675’s existing members work at oil refineries across L.A. — not exactly natural allies for Proterra, whose business model requires public transit agencies across the country to ditch fossil fuels for greener battery-powered vehicles.

But Steelworkers reps convinced him they understood the need to move to a carbon-neutral economy and were serious about helping their oil industry members survive the transition. And Proterra’s leadership seemed surprisingly amenable to the union drive.

Two weeks later, on Nov. 12, Pinto and his co-workers at the L.A. plant voted overwhelmingly to join the Steelworkers. “This is my first time being in a union, and I’m actually excited about it,” Pinto says. “It was a no-brainer for me that it was something we could use for the job stability.”

That same day, Silicon Valley-based, venture capital-backed Proterra voluntarily recognized the union and pledged to sign a “community benefits agreement,” which would commit the company to working with local nonprofits to hire and train workers from disadvantaged backgrounds.

The City of Industry plant, with 61 workers, represents just a fraction of Proterra’s overall workforce: Including nonunion office workers, the company has 126 employees in L.A. County, plus a larger plant in Greenville, S.C., and a head office in Burlingame. But with California’s ambitious goals for reaching carbon neutrality and L.A. Department of Transportation’s plan to have a fully electric fleet by 2030, it’s poised to grow.

Popple joined the company in 2014 after working as an early executive in the finance department at Tesla — whose head, Elon Musk, has taken an antiunion stance — and as a partner at the blue-chip venture capital fund Kleiner Perkins Caufield & Byers. Proterra has raised $525 million since being founded in 2004, with Kleiner Perkins and other venture capital funds investing along the way.

“Because of my background, we had some hilarious conversations at first,” says Popple of meetings with labor reps. “It seemed like their assumption going in was because of Silicon Valley and VC [venture capital] and companies I’d worked for, I was a hardcore tech libertarian who believed that ultimately there will be no government and everything should work like Burning Man.”

But the looming threat of climate change, Popple says, helped focus the conversation: “If you end up with realists in labor talking to realists in tech, and our primary concern is that we have about 10 years to get something done, that creates a sense of urgency.”

And being known as a union-friendly shop could be an edge when it comes to competing for public transit agency contracts. Those clients, which include the L.A. Transportation Department and Foothills Transit, have bought a total of 700 buses from the company, and make up almost all of Proterra’s business (though the company also sells its battery and drivetrain technology to manufacturers looking to build other types of electric vehicles).

“There’s nothing formal in procurement guidelines that allows a city to pick one manufacturer or another based on where you’re located or whether you’re unionized,” Popple says. “But there are qualitative aspects to procurement.”

In recent years, nonprofit groups in Los Angeles have pushed for community benefits agreements, like the one that Proterra agreed to sign, to be linked to government contracts.

BYD, another battery-powered bus manufacturer with a large factory in Lancaster, signed a similar agreement in 2017 when its workforce unionized under SMART, a union mostly representing sheet metal and transportation workers.

Jobs to Move America, an L.A.-based nonprofit that advocates for policies like community benefits agreements, brokered the deal with Proterra. Hector Huezo, a senior staffer at the organization, says that Proterra’s deal will look something like BYD’s, which created an apprenticeship system targeted at recruiting and training women, African Americans, formerly incarcerated people and military veterans.

“Our coalition coalesces around this idea that a company that relies on public contracts to build up their business should be accountable for creating community benefits in that process,” Huezo says.

His group and the Steelworkers approached Proterra in 2016, when it first announced plans to open its City of Industry factory, to open the relationship that ended with last week’s unionization vote.

For leaders at Local 675, who have been discussing how to advocate for their members who work at oil refineries while also working toward a future free of fossil fuels, Proterra’s entrance into the union represents a potential proof of concept for the idea that switching to a green economy doesn’t have to mean abandoning the security of carbon-based jobs in energy and transportation.

“We here at the local have been talking about a just transition for over 20 years,” says staff organizer Moises Hernandez.

“Oil’s gonna fight tooth and nail till the end — they don’t believe that they’re gonna end anytime soon — but we are looking at the future for our membership so that they have something to transition into, and organizing Proterra might be the first step.”