Gordon Sondland Throws Trump, Giuliani Under the Bus (Backs Up, Does It Again) 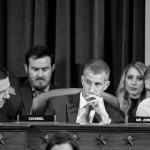 When Republican lawmakers on the House Intelligence Committee sat down for Gordon Sondland’s testimony this morning, they likely breathed a sigh of relief. Finally, after days of hearings with traitorous government officials hell-bent on taking the president down with facts, they’d get to hear from the Trump donor turned E.U. ambassador, who would no doubt testify that this whole impeachment inquiry is a sham, and that Donald Trump is an innocent, noble man with an IQ of 390 and a body from the gods. We know they thought this because, mortifyingly, ranking member Devin Nunes’s opening remarks suggested he thought Sondland was in the GOP’s corner:

But as Sondland’s opening statement made evident, such was not the case! Noting that “a few critical points have been obscured by noise over the last few days,” Sondland made clear to the committee that he, Energy Secretary Rick Perry, and Ambassador Kurt Volker “did not want to work with Mr. [Rudy] Giuliani,” but did so “at the express direction of the president of the United States.” Sondland noted that to refuse would mean losing “an important opportunity to cement relations between the United States and Ukraine. So we followed the president’s orders.” He added that, at the time, he didn’t think Giuliani‘s role was improper, nor did he know that the ex-mayor was working with individuals now under indictment, but, in retrospect, knowing what he knows now, he “would not have acquiesced to [Giuliani’s] participation.”

Then he dropped the bomb that Republicans will have difficulty spinning on Fox News, though they’ll no doubt rise to the occasion:

...as I testified previously, Mr. Giuliani’s requests were a quid pro quo for arranging a White House visit for President Zelensky. Mr. Giuliani demanded that Ukraine make a public statement announcing investigations of the 2016 election/DNC server and Burisma. Mr. Giuliani was expressing the desires of the president of the United States, and we knew that these investigations were important to the president.

In sum, per Sondland, not only was there a quid pro quo, but it came at the behest of the president, blowing up the GOP’s arguments that nothing of the sort occurred and that Trump was just an innocent pawn. (In reference to his revised testimony delivered privately to lawmakers earlier this month, Sondland said his lawyer had made “multiple requests to the State Department and the White House” for his “phone records, State Department emails, and other State Department documents,” all of which were denied.)

Elsewhere, GoSo testified that upon learning military aid had been suspended, and understanding that it would not be released “until there was a public statement from Ukraine committing to the investigations of the 2016 election and Burisma,” he went to Senator Ron Johnson with his concerns, as well as the Ukrainians. (For those of you keeping up at home, that also destroys the Republican argument that the Ukrainians had no idea why the aid was being held up.) Sondland again made clear, in case Nunes and Co. didn’t hear it the first time, that he was simply following “the directions of the president,” and was working with Giuliani “because the president directed us to do so,” despite having “no desire to set any conditions on the Ukrainians.” 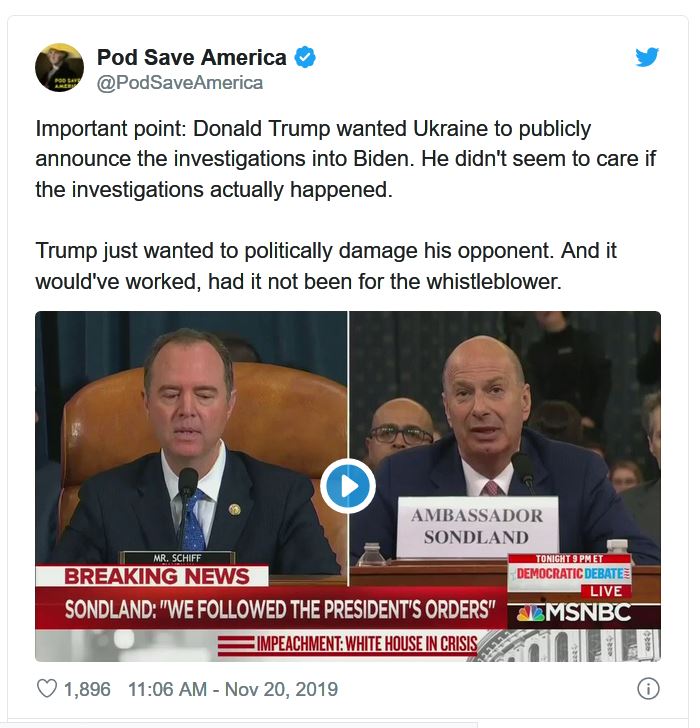 Referring to the July 26 phone call discussed by Ambassador Bill Taylor last week, wherein Sondland allegedly spoke to Trump from a restaurant in Kiev and assured the president that Zelensky would do “anything” he wanted, Sondland said that he had no reason to doubt the account, adding, “Actually, I would have been more surprised if President Trump had not mentioned investigations, particularly given what we were hearing from Mr. Giuliani about the president’s concerns.”

Finally, just to put as fine a point on it as possible, Sondland told the room: “I know that members of this committee have frequently framed these complicated issues in the form of a simple question: Was there a quid pro quo? As I testified previously, with regard to the requested White House call and White House meeting, the answer is yes.”

The president, of course, will no doubt attempt to claim at some point today that Sondland has no idea what he’s talking about, or that he’s a Never Trumper, so, just for posterity: 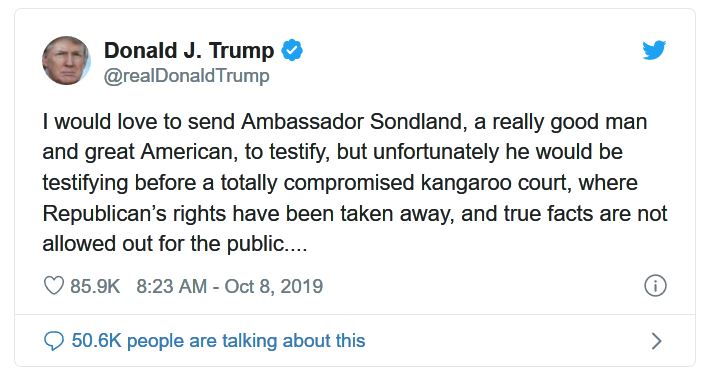 Trump, Giuliani aren’t the only ones who should probably lie low for a while

According to Sondland, the Ukraine scheme was a real team effort:

Sondland said...“there was no secret” about the work within a much larger circle of Trump’s cabinet. [Secretary of State Mike] Pompeo, [Vice President Mike] Pence and [acting chief of staff Mick] Mulvaney were among those Sondland named as senior officials who were aware of the pressure campaign. “Everyone was in the loop,” Sondland said.

Sondland said that Pompeo was involved at several points. The secretary of state “was aware that a commitment to investigations was among the issues we were pursuing” and the State Department was “fully supportive,” the ambassador testified. That coordination with Pompeo extended to navigating what Sondland said he believed was another bargaining chip the White House had put in play in July to pressure Ukraine: $400 million in security assistance to fend off Russian aggression.

Pompeo and Pence have both insisted that neither they nor the president did anything wrong, though Mulvaney, of course, just came out and said it last month, telling reporters that of course there was a quid pro quo deal with Ukraine, and that such arrangements happen “all the time.”

If you want to get in good with the boss man, nix the industry jargon and keep the words to three, four letters, max:

Among the revelations Wednesday in the impeachment inquiry into Donald Trump—an ambassador revealed how he employs profanity-laden “Trump-speak” in hopes of relating to the U.S. president. In an unusual moment of levity in the televised hearing, Gordon Sondland, the U.S. ambassador to the European Union, acknowledged he may have told Trump that Ukraine’s leader “loves your ass.”

“That sounds like something I would say,” Sondland, a hotel owner who received the ambassadorship after donating to Trump, said with a smile when asked by the Democratic counsel about the account. “That’s how President Trump and I communicate—a lot of four-letter words. In this case, three-letter,“ he said, drawing laughter from the crowd. Sondland said he was trying to explain to Trump how Ukraine’s new president, Volodymyr Zelensky, was “very willing to work with the United States and was being very amicable.

“So putting it in Trump-speak—by saying ‘he loves your ass, he’ll do whatever you want’—meant that he would really work with us on a whole host of issues,” Sondland said. 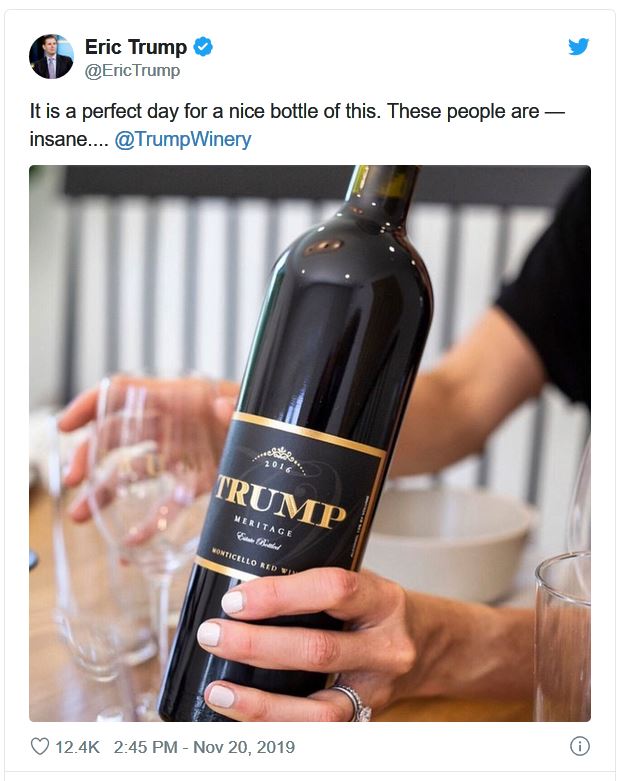 (It’s probably beside the point to mention this, but a wine connoisseur described the offerings from Trump Winery as having notes of “Welch‘s grape jelly.”)