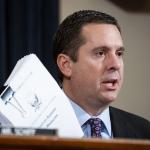 WASHINGTON (The Borowitz Report)—In what some observers called his most sarcastic opening statement of the impeachment inquiry, Representative Devin Nunes, on Thursday, accused witnesses of trying to mislead the American people with facts.

“From the beginning of these proceedings, the Democrats’ witnesses have offered facts, more facts, and nothing but facts,” Nunes said. “I, for one, have had enough of their factual games.”

Ramping up his attack, he accused the civil servants who have testified of having “an almost cult-like worship of verifiable information.”

Nunes, however, warned his Democratic colleagues that “the American people won’t be fooled by your relentless account of things that actually happened.”

“When the American people see the Democrats building this massive, sky-high tower of facts, they have to ask themselves: Is that all you’ve got?” he said.