Here and there, A Beautiful Day In The Neighborhood captures the radical kindness of Mr. Rogers 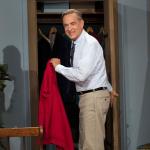 It’s a funny thing to say about someone who exuded wholesomeness with every breath he took, but Fred Rogers was, beneath the smiles and cardigans and softly delivered affirmations, a pretty radical figure of American pop culture. On and off for 30 years, the one-time Presbyterian minister used his platform—the beloved, long-running preschool series Mister Rogers’ Neighborhood—to promote values all but absent from the landscape of television and public discourse: compassion, patience, emotional honesty, a commitment to never talking down to children or minimizing their feelings. That made him more than just a force of genuine cultural good. It made him, in his own gentle way, countercultural.

Of course, Rogers’ generous and touching worldview looks even more anomalous from the vantage of our present moment, which may account for the second cultural life it’s been enjoying through memes and hit documentaries. Doubtlessly green-lit to capitalize on a revival of fandom, Marielle Heller’s A Beautiful Day In The Neighborhood is technically set in the late ’90s, a few years before Rogers retired and few more before he died of cancer. Yet in an indirect sense, it’s very much about the collision of the late entertainer’s philosophy with the combative rage-in-280-characters-or-less spirit of right now. Not surprisingly, the film plays like a celebration of Rogers’ kindness as a balm for an unkind age; that it never drifts fully into hagiography is thanks to Heller’s attempts to find at least a few cracks in her subject’s saintliness.

A Beautiful Day In The Neighborhood

This isn’t a biopic, thankfully. (Why would we need one, after the life story so comprehensively laid out by last year’s tearjerker nonfiction portrait, Won’t You Be My Neighbor?) Rogers, in fact, isn’t even the main character of the movie, which instead treats him more like a kind of fairy godfather figure, floating into the narrative to impart some desperately needed emotional wisdom. Written by Micah Fitzerman-Blue and Noah Harpster, A Beautiful Day In The Neighborhood instead adopts the perspective of Lloyd Vogel (Matthew Rhys), an investigative journalist who’s assigned, much to his chagrin, to write a profile on Rogers. Lloyd is based, however loosely, on the writer Tom Junod, who caught the same assignment for Esquire back in 1998. Could he have guessed that he’d one day be portrayed as the sad-sack reporter disarmed and ultimately transformed by his conversations with a warmhearted TV host?

Rogers is played, in a savvy casting coup, by another icon of American wholesomeness, Tom Hanks. It’s a bit distracting at first. The film begins with a recreation of the famous opening sequence of Mister Rogers’ Neighborhood, and though the Oscar winner mostly nails the mannerisms (like that business where he throws one shoe into his hand) and at least attempts to mimic Rogers’ clean enunciations and folksy vocal rhythms, Hanks hasn’t delivered an uncanny or even entirely convincing impression. Of course, it’s hard to imagine any performer, even a more chameleon-like one, competing with an audience’s memories of this soulful childhood fixture. What Heller does is arguably more effective: She finds the spirit of Rogers in Hanks, using all of the latter’s star qualities—his essential decency, his trustworthiness, his fatherly presence—as a proxy for the former’s. We accept the substitution because the two have staked out a similar corner of the public imagination.

Flying out to Pittsburgh, where he watches from the sidelines of the cozy living-room set of Mister Rogers’ Neighborhood (a world of make believe that also becomes, on a daily basis, a space for honest communication), Lloyd is taken aback by the sincerity of his interview subject. Is Rogers really this impossibly nice or is “Mr. Rogers” a front he has the responsibility to tear back? The tension between a grumpy writer and a kindly national hero is the stuff of cliché—hell, it’s basically the same dynamic Hanks tackled in Saving Mr. Banks, which cast him as a weaver of family dreams with a more complicated legacy. But A Beautiful Day In The Neighborhood gets some prickly drama and buddy comedy out of the interview scenes, when Lloyd’s probing investigative instincts scrape against Rogers’ sometimes exasperating positivity—a quality the film dares to hint may be a form of ingratiation and even evasion. “He’s not perfect,” insists Rogers’ wife, Joanne (Maryann Plunkett), and it’s to the film’s credit that it offers a few glimpses of the imperfection he mostly conceals.

Heller, who coaxed a terrific dramatic performance out of Melissa McCarthy in last year’s factually inspired Can You Ever Forgive Me?, seems to recognize the conventional, therapeutic arc of the material. To compensate, she offers a few reality-bending flourishes, using Neighborhood-style miniatures for the establishing shots, adopting a fourth-wall-breaking framing device, and even staging a slightly nightmarish dream sequence on the set of the show. Some of these touches are hokier than others, though all speak to the often uncommented-upon weirdness of Rogers’ trailblazing program. Heller’s biggest contribution is the space she provides her actors to find the truth in a scene—another parallel, in a sense, to Rogers’ habit of holding on a moment of honest dialogue between himself and his guests. For all the shrewdness of Hanks’ involvement, it’s Rhys who ends up looking like the crucial hire; summoning that poignant tension between vulnerability and standoffishness he perfected on The Americans, he makes a real character out of a stereotype.

Lloyd, as it turns out, is a new father, and that drums up trauma gnawing at his contentment. What he really needs from Rogers is not a great story but the right emotional tools to overcome the resentment he feels for the estranged father (Chris Cooper, master of bad dads) who walked out on his dying mother years earlier. There’s something tidy and even schematic about the story of redemption and forgiveness A Beautiful Day In The Neighborhood ultimately tells. Like the documentary, from which it somewhat manipulatively filches a scene of Rogers prompting the audience to take a moment of silence to think of someone who helped them, Heller’s movie is never quite as radical as the artist it lionizes. But it does come close, here and there, to communicating what made him special: the empathy, the curiosity, the regular encouragement of people young and old not to feel ashamed of their feelings. By the end, even the most cynical of viewers may feel like Lloyd, their defenses breached; eyes may roll, but they might well up a little, too.

Note: This is an expanded version of the review The A.V. Club ran from the Toronto International Film Festival.