The Powerful Perspective of 'Queen & Slim' 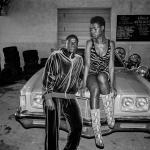 Last month, five days after the former police officer Amber Guyger was sentenced in the fatal shooting of Botham Jean, an unarmed twenty-six-year-old black man, whom she shot in his home, and five days before Atatiana Jefferson, a twenty-eight-year-old black woman, was killed in her home by the police officer Aaron Dean, “Queen & Slim” began previews in a small theatre just off Bryant Park. The film is the product of the vision of two black women: Lena Waithe, who wrote it, and Melina Matsoukas, who directed it. (Waithe and James Frey, the shamed memoirist, collaborated on the story.) It means something that a movie that was conceived years ago could land so squarely in the midst of dual tempests involving firearms, police, and black people whose lives expired violently, prematurely, at the hands of white people who were sworn to protect them. The fact that both Jean and Jefferson were at home when they were killed underscores a central conceit of the film: that a system capable of dispensing such arbitrary deaths cannot be trusted in any context, least of all to administer justice on behalf of those whom it also victimizes.

The recognition of this fact changes the implications of the story that Waithe and Matsoukas tell with this film: about a couple on a first date who kill a police officer in self-defense, and their subsequent life as fugitives. Early buzz around the movie pegged it as a “Bonnie and Clyde” tale for the Black Lives Matter set, but that would be an entirely different film from “Queen & Slim.” “Bonnie and Clyde” is the story of two outlaws who are fleeing justice; “Queen & Slim” is a meditation on a system of justice that treats innocent people as outlaws. This is not a novel undertaking. It’s hard to overlook, for instance, that this movie arrives in theatres in the same year as the thirtieth anniversary of Spike Lee’s “Do The Right Thing.”

That film follows the events of a single day in Bedford-Stuyvesant and culminates in the death of a neighborhood fixture named Radio Raheem, at the hands of the N.Y.P.D. In 2014, in the aftermath of Eric Garner’s death from a choke hold administered by a New York City police officer, Lee spliced together video from Garner’s and Raheem’s deaths, one cinematic, one chaotically real, both somehow true—a diptych of life and art relaying the same subject matter. As I wrote at the time, however, Lee conceived of the Radio Raheem scene after the death of Michael Stewart, a black graffiti artist who died in police custody, possibly as the result of a choke hold, in 1983. “Do The Right Thing” was not prescient in forecasting Garner’s death, it was archival in rendering a version of Stewart’s. But eight, years before Stewart’s death, the film “Cornbread, Earl & Me,” which features a fourteen-year-old Laurence Fishburne, tells the story of a rising basketball star, played by Jamaal Wilkes, who is shot by police in a case of mistaken identity, and it shows the ways in which the system protects the officers who killed him. And so it goes, act and depiction, tumbling all the way back to some unknown original insult. The capricious loss of black life is so common a reality as to have inspired an entire body of art addressing its implications.

The story of “Queen & Slim” is propelled by an arbitrary traffic stop, in which a white officer detains a couple, whose names we do not know yet, played by Daniel Kaluuya and Jodie Turner-Smith. When the officer fires his gun to prevent Turner-Smith’s character from recording the incident on her cell phone, we are anticipating a scenario that has become a dispiriting cliché of social injustice, the indefensible but somehow bureaucratically justifiable death of a black civilian. But the gun is wrestled away and goes off during the struggle, killing the officer. The shooting, captured on the squad car’s camera, is a Rorschach test that asks all subsequent characters, and, by extension, the audience, what they see when they look at the incident. The officer himself is like Patient Zero in an outbreak: his actions set in motion the decisions made by everyone else whom Queen and Slim encounter en route to the film’s finale. Each television screen or cell phone upon which the footage plays serves as a kind of exposure to a pathogen, as everyone reacts to a different reading of the situation. Everyone is moral but no one is right.

Matsoukas has touched upon these themes previously. She directed the much-lauded video for Beyoncé’s “Formation,” which was criticized by police groups for provocative imagery of a police car sinking below water in a Hurricane Katrina-like flood. In “Queen & Slim,” the system is inundated by a metaphorical flood. In the opening scene, Turner-Smith and Kaluuya are on an awkward first date. She, we learn, is an attorney whose client was sentenced to death earlier that day. It’s the intimacy of her relationship to the criminal-justice system that makes it all the more damning when she demands that they go on the run rather than attempt to explain to other officers what happened. The hypothetical implicit in the scene itself is: what would have happened if someone like Eric Garner had fought back? What would have happened had Botham Jean or Atatiana Jefferson shot first? And what are the probabilities that anyone fighting back against unsanctioned police violence could be thought of as anything beyond a thug or a murderer by the greater public?

The connections between “Cornbread, Earl & Me” and Michael Stewart and “Do the Right Thing” and Eric Garner form a daisy chain in which the question is less about whether art or life is imitating the other and more about the ways in which art serves as a bridge between tragedies that occur at irregular intervals but with such similarities that they have formed a canon of the wrongly dead. This is part of what makes “Queen & Slim,” such a brilliant, indelible departure, and it’s most of the reason that I continued to think about it obsessively in the weeks after I saw it in that theatre in midtown. There is an accidental homicide, but it is not committed by a police officer. There is no template of bureaucratic responses, no corps of surrogates deployed to dispel the innocence of the victim in the media, no hedging of the deaths with reminders of how dangerous the shooter’s line of work is and what he means to the rest of society.

When the eighteen-year-old Michael Brown was killed by the police officer Darren Wilson, five years ago, in Ferguson, Missouri, the Times ran a piece that led with the description of Brown as “no angel,” to which outraged critics in Ferguson and beyond shouted that they didn’t know he had to be. The system here is no angel. It is the story of two people—a black everyman, played with sublime reserve by Kaluuya, and an attorney who is both sincere and cynical in equal measure, compellingly brought to life by Turner-Smith.

There are a great number of other implications to this story: the brilliant inversion of a slave narrative, in which two people flee from a Northern free state into the Deep South to seek freedom; the thorny and complicated ways in which other African-Americans respond to them en route; a twist in the middle of the film that unsettles any sense of moral simplicity that the viewer might have indulged up to that point. Most provocatively, the incident at the heart of “Queen & Slim” is framed in the context of a May, 1973, incident on the New Jersey Turnpike, in which members of the Black Liberation Army, including Assata Shakur, were involved in a shootout in which the police officer Werner Foerster was killed. Shakur, who is referenced multiple times in the film and serves as a kind of historical inspiration for the decisions Turner-Smith and Kaluuya make after the shooting, escaped from prison, in 1979, and has remained a fugitive in Cuba for nearly four decades. The State of New Jersey and the F.B.I. maintain rewards for her capture; she has been denounced by successive New Jersey governors. At the same time, her memoir, “Assata,” is a mainstay of African-American-studies courses and has remained in print for thirty years.

This is not a divergence in the responses to Shakur; it’s a divergence in people’s views about the credibility of the system that arrested and imprisoned her and of its representative who pulled her over that day. These different points of view are implicit in “Queen & Slim”—it is emphatically told from the vantage point of people with the vindicating view of Shakur. If we’re unaccustomed to grappling with these questions in film, it is because it’s been so long since they were raised. Matsoukas did not create a gangster-moll story for the modern era; she created a blaxploitation movie. The reference is not “Bonnie & Clyde,” it’s “Sweet Sweetback’s Baadasssss Song.” Melvin Van Peebles’s indie film, released in 1971, is another audaciously black story that grapples with an African-American who attacks police officers and goes on the run. It, too, was a movie that took its audience’s understanding of systemic injustice as a given. It, too, recalled history, albeit not the strand of it we prefer to highlight in the United States.It was raining the night that I saw “Queen & Slim” and, after the screening, I stood outside the theatre beneath a construction scaffold sorting through the layers of the film. The movie reminded me of a historical reference buried deep in my memory. A hundred and nineteen years ago, a black man named Robert Charles sat with a friend on the steps of a building in New Orleans near where his girlfriend lived, waiting for her to get ready for a date. He was approached by several police officers, one of whom grabbed him. When a fight ensued, Charles fled after he and the officer both opened fire. Police tracked him to his apartment, where he killed two officers. A police manhunt terrorized black communities in New Orleans, but Charles evaded capture for several days, until he was tracked to an empty building, where, in the course of a standoff, he shot more than twenty more white men. The official versions of this story held that the men who set the building on fire and shot Charles as he exited were heroes. Black people chose a different protagonist. The journalist Ida B. Wells-Barnett wrote of Charles that “white people of this country may charge that he was a desperado, but to the people of his own race Robert Charles will always be regarded as the hero of New Orleans.” People subject to the same abuses Charles suffered were unconcerned with whether he was an angel. What mattered was the number of white men who would now think twice before trying to pull the same stunt.

“Queen & Slim” is an extrapolation of thoughts that run through the heads of black people each time we’re called upon to mourn publicly, to request justice like supplicants, to comfort ourselves with inert lies about this sort of thing stopping in the near-future. That kind of insular honesty is rare in any kind of art but particularly perilous in cinema. This is a film that stands as strong a chance of being hailed and lauded as it does of being denounced and picketed, but it understands the inescapable fact that heroism is entirely a matter of context, that heroes need not be concerned with explaining themselves, and that it—like the characters at its center, like the history it draws upon—stands a great likelihood of being misunderstood. And, gloriously, neither its writer nor its director appears to give a damn.

Jelani Cobb is a staff writer at The New Yorker and the author of “The Substance of Hope: Barack Obama and the Paradox of Progress.”