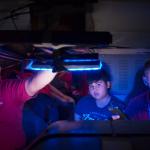 Mexico City’s health care crisis, much like America’s, primarily revolves around prohibitive costs and limited access. The issue’s myriad complexities are neatly embodied by a single problem plaguing the city: an ambulance shortage. The Mexico City government only operates 45 emergency ambulances to accomplish the impossible task of serving nine million people. Private ambulance companies, such as the one run by the father-and-sons team at the center of Luke Lorentzen’s vérité documentary Midnight Family, have sprung up in the city to fill the void. As members of a for-profit underground network, the Ochoa family frequently cuts ethical and medical corners in order to help an underserved population. When there’s profit to be made, capitalism finds a way.

Like any small business, the Ochoa family comes up against many daily obstacles that hinder their success. They face fierce competition from other private and public EMTs, often dangerously racing them in the streets to accident scenes. Corrupt cops constantly impede their progress by demanding bribes or halting their assistance. Since the Ochoas work in a liminal legal space, they don’t necessarily have access to the proper equipment, let alone paperwork or an up-to-date vehicle. Most frustrating of all, they’re forced to shake down the victims they transport when they can’t or won’t pay. The Ochoa family may charge high prices for their emergency services, but the money they reap mostly goes toward upkeep and expenses. By night, they save lives. By day, they’re just another low-income Mexico City family struggling to put food on the table and pay their electric bills.

Lorentzen documents the nightly excursions in stunning widescreen compositions, carefully orchestrated and featuring an urban-noir color palette dominated by the ambulance’s spinning blue warning light. (At times, the imagery almost recalls the night scenes in Michael Mann’s Thief.) Despite the flattering aesthetic, Lorentzen doesn’t present the Ochoa family in an exaggerated heroic light. Instead, he matter-of-factly focuses on the intersection between their mercenary and selfless impulses. It’s obvious that Fer and his two sons, Juan (age 17) and Josué (age 10), feel responsible for the people in their charge and take their safety seriously. At the same time, they’re forced to make ethically questionable decisions every time they’re on the road, like pressuring people in critical condition to accept care they can’t afford. Lorentzen keeps the action as thrilling as possible in the moment—he films two heavy-duty car chases and a time-sensitive journey to the hospital, both of which are as suspenseful as anything you’ll find in the multiplex—to replicate the high-pressure context that allows the Ochoas’ problematic conduct to thrive. Which mother wouldn’t instinctually trust the EMTs in charge of saving her daughter’s life, even if their profit motive inevitably guides, and sometimes clouds, their judgment?

To his credit, Lorentzen never guides the audience’s moral response, allowing us to make up our minds about the Ochoas on a scene-by-scene basis. He also provides ample rationale for their actions by depicting their hand-to-mouth lifestyle alongside the on-the-job drudgery. Although Midnight Family’s diaristic structure contributes to a general shapelessness (the film doesn’t end so much as just stop), it allows for plenty of time spent with the Ochoa family, including Juan and Josué, who bicker and joke around with each other as often as they patrol the streets for misfortune. These moments of downtime provide a warm, comic energy to Midnight Family that renders the Ochoas naturally sympathetic subjects and illustrates why Lorentzen decided to film them in the first place. Yet they also throw the scenes where, say, they’re coercing the mother of a domestic abuse victim to pay 3,800 pesos for a hospital ride in a different light. A health care system that can’t effectively cover its population and forces civilians to pick up the slack turns everyone into a victim.