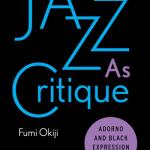 During a public discussion to mark a 2018 career retrospective show at The New Museum in New York, John Akomfrah was asked a question about the function of music in his film works. Having addressed the importance of post-punk and dub to his early practice, Akomfrah then said the following:

The side that I’ve learnt the most from though is jazz, and free jazz in particular, because free jazz is not music, it’s a credo. It’s a credo because it’s about an approach to not simply the sonic, but to that great big slab of the philosophical that we call time. It’s an approach to time. That’s what free jazz is. It’s about the splintering and reordering and reconfiguring of time. Once it’s told you that, you never forget it.

For Fumi Okiji too, jazz is a credo, and to grasp it as such requires taking on another ‘great big slab of the philosophical’: the work of Theodor Adorno.

Adorno’s essays on jazz have long been a source of tension for those who recognise his standing as a powerful thinker of western art under conditions of capitalist modernity, or who understand jazz to be the world-historical art form of the twentieth century. Readers of Adorno with an ear for jazz have sought to contextualise his weak judgements on jazz music in order to rescue the remainder of his corpus. Within Black Studies, by contrast, it has become commonplace to undertake extensive theorisations of jazz without feeling the need to take seriously Adorno’s philosophical aesthetics and their relation to the debilitating nature of life under modernity. Okiji does not appear to want a stake in either of these games, and thus she is able to avoid either mild censure or simple avoidance in order to take Adorno to task for his wilful mishearing. Organised around the desire to ‘meet Adorno partway’ – by virtue of the ways in which his account of the double character of radical art appears on the surface to ‘rhyme’ with the drive of the music – Okiji is also able in Jazz as Critique to detail the precise nature of his failings.

One such failing is Adorno’s transposition of the jazz solo onto the individual bourgeois subject. As Okiji explains, the central tenet of his thinking was that the bourgeois individual was the most advanced subject under modern capitalism, and thus any assessment of aesthetics and politics had to move through it. This conceptual prefiguring was what allowed Adorno to, firstly, fetishise the solo as the apex of the jazz work, and secondly, to hear in the solo form a type of regression and complicity with the administered world which at best meant jazz only offered an accurate image of the ‘embattled individual’. Okiji suggests that Adorno’s mistake in privileging the solo as his point of attack lay in his general devaluation of proletarian consciousness, and thus his inability to understand that the historical formation of the individual as an image of the bourgeois was antithetical (hostile even) to the social composition of jazz:

We find reified fragments of poorly formed ideas, bordering on caricature, which add false depth to Adorno’s jazz critique. There is an implication that the modern black has, in a sense, previewed, under a distinct set of circumstances, the disenfranchisement of the bourgeoise under monopolistic capitalism. Adorno invites us to read jazz as a fable through which we can grasp the predicaments of bourgeois subjectivity a little better.

Adorno’s inability to account for the difference between the unique mode of racial proleterianisation that forged jazz as black music and the formation of the bourgeoisie points to a further error on his part, and for Okiji, his most grave: that is, his refusal to historicise jazz through the experience of black diasporans in North America. As a communal mode of sonic experimentation, jazz’s history was indivisible from the history of slavery. Okiji argues that Adorno displayed an unwillingness to comprehend the implications of slavery as it fused with (but was never reducible to) the making of jazz. If he had done so, he would have realised the slave had no access to the veneers of self-determination which duped the modern bourgeoise. For the slave, and the free blacks who followed them, exploitation and violence were natural and material. Thus, in response to Adorno’s judgement of the music as one of ‘obedience and unreflective servitude on the part of slaves’, Okiji states, by contrast, that the propulsion engine for jazz can be found in the intense social contradictions of black life in North America. If Adorno had taken the requisite care to consider such extra-musical factors, he would have realised using European art music as the model for assessing jazz was a fruitless task. As such, the central flaw in his method of structural listening is not technical but ethical, in that structural listening relies upon the idea that a musical work has an internal logic equivalent to the individuality of the bourgeois subject:

Moments like these – attempting to reconcile Adorno’s indispensable insight on the dehumanising tendencies of Western Civilisation with this aggressively exclusionary approach to music – give me pause to consider the limits of his self-cognizance. It recalls other such indefensible moments but, more seriously, points to a fundamental flaw in a body of work committed to the reconcilement of humanity, scholarship driven by a desire to allow suffering, the nonidentical, and the unthought, to speak. It is impossible to dismiss as an aberration an essay devoted to the supposed regressive character of jazz, which proceeds to silence the music in order that it fit a wholly inappropriate formalist agenda.

Despite what feels at times like an excoriating admonition of the jazz essays, there is, however, a meta-critical provocation implicit in Okiji’s decision to read Adorno so closely. The choice to organise a book which seeks to make a series of arguments about the blackness of jazz as a mode of radicalism through such a careful interpretation of Adorno causes trouble for some recent promotions of more diverse citation of sources as a means to address structural inequalities in knowledge production. Much like the opening chapter of Gayatri Spivak’s An Aesthetic Education in an Era of Globalisation (where she moves through Kant, Schiller and Bateson), Okiji’s problem with Adorno is not that he is European and male. The issue is that despite his own deeply held ethical convictions, Adorno was brutally misguided when it came to jazz, and therefore black life. At the same time, precisely because he could be so illuminating when diagnosing the many fractures of modernity, Okiji feels it is her duty to take him apart for his own failings when it comes to blackness. As Fred Moten has said, the only people who give out citations are the police, and Okiji moves within the same vein. Instead of editing him out of existence, she embraces Adorno, holding him tight enough to whisper into his ear both her criticisms and her case for jazz as a credo.

It is when making the case for the credo that Jazz as Critique comes into its own as an intellectual undertaking. Moving beyond the task of pointing out Adorno’s shortcomings, Okiji develops an enriching theorisation of the nature of jazz as the aesthetic imperative of the black radical tradition. Perhaps her key insight in this area concerns jazz’s poverty. According to Okiji, attuning to the poverty of jazz requires two tasks of the listening congregation. One is that poverty is not understood as the basis for the music’s debilitation, but is its resource. The other is that poverty as resource is not a narrative feature of jazz (it is not about tales of nobility found in poverty), but that poverty is its defining formal characteristic. Pointing to the twelve-bar blues as a primary instance of poverty as formal resource, the wealth of this organising principle lies in its openness and usability which allows for seemingly infinite adaptations. Thus the impoverishment of the twelve-bar blues operates as an instance of the ‘mascon’ – or the massive concentration of black experiential energy (a formulation borrowed from Stephen Henderson) – whereby the ‘propensity towards deviance … the gathering of contribution that makes up a standard is a celebration of aberration.’

The formal impoverishment argument allows Okiji to assemble her second major insight. For her, if encountered with the level of generosity and attention that goes into the making of the music, what soon becomes evident to the listening congregation is that jazz is not a musical repertoire but a means for the non-coercive organisation of life. Jazz is both fed by and nourishes modes of socio-ethical orientation that contour an over-riding homelessness. The historical fact of the unavailability of ownership (in its multiple forms) for the masses of black people has meant that jazz enacts a concrete alternative to the dominance of the private sphere: ‘A reclaimed, subprime, matrofocal, fractal compound or extended home’.

It is in the interplay between impoverishment and homelessness that Okiji makes her case for the blackness of jazz. The significance of these claims lies not only in their novelty, but the means by which she puts them together. A notable feature of the theorisations of jazz as a modality of blackness in this book is Okiji’s break with the modernist reliance upon heroic figures. She does not get caught up in the trap of lionising exceptional artists, but instead braids her analysis with numerous instances of jazz’s radical operations (Charles Mingus, Bessie Smith, Louis Armstrong, The Art Ensemble of Chicago, Thelonious Monk and Billie Holiday), as well as extra-musical figures who have their own orientations towards blackness as impoverishment and homelessness (Nathaniel Mackey and Saidiya Hartman).

All of this thinking is presented in a manner which folds back into Okiji’s repeated reference to jazz as ‘sociomusical play’. It is evident from the opening pages of this book that it has been handled by a person, with all the beauty of scars running across the surface of the writing. Which is to say that Jazz as Critique is the rare type of text that has a voice and is willing to use that voice to make an argument, as opposed to the now standardised model of text as hermetically-sealed object engineered in the hothouse of a graduate school program.