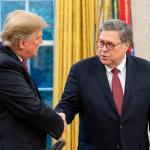 This is the stated mission of the New York City Bar Association.

To equip and mobilize the legal profession to practice with excellence, promote reform of the law, and uphold the rule of law and access to justice in support of a fair society and the public interest in our community, our nation, and throughout the world.

In support of their efforts to “uphold the rule of law,” the association recently sent a letter to the leaders of Congress asking them to investigate Attorney General William Barr.

Mr. Barr’s recent actions and statements position the Attorney General and, by extension, the United States Department of Justice (DOJ) as political partisans willing to use the levers of government to empower certain groups over others. These statements are the latest examples of a broader pattern of conduct that is inconsistent with the role of the Attorney General in our legal and constitutional system and with the norms and standards that govern the fair administration of justice. We urge Congress to exercise its constitutional authority to investigate this troubling pattern of conduct, in order to assess Mr. Barr’s actions as Attorney General and to consider any legislative and oversight responses and remedies that may be necessary.

The authors listed several public statements by Barr that demonstrated a disregard for the fundamental principle of impartiality that is required by the chief law enforcement officer in the country.

1. Barr’s speech at the University of Notre Dame

In his speech, which is now published on the DOJ website, Mr. Barr stated that “the Founding generation… believed that the Judeo-Christian moral system corresponds to the true nature of man” and that “Judeo-Christian moral standards are the ultimate utilitarian rules for human conduct.” According to the Attorney General, “they are like God’s instruction manual for the best running of man and society.” Expressing his view that “Judeo-Christian values… have made this country great”—while simultaneously rejecting the moral basis of secularism and, by implication, other religions (and atheism) as “an inversion of Christian morality,” Mr. Barr vowed to place the Department of Justice “at the forefront” of efforts to resist “forces of secularization.”

2. Barr’s speech at the Federalist Society

Mr. Barr charged that opponents of the Trump presidency’s policies have been “engaged in the systematic shredding of norms and the undermining of the rule of law.” By contrast, Mr. Barr proclaimed, conservatives “tend to have more scruple over their political tactics” and are more genuinely committed to the rule of law. The Attorney General referred to something he called a “progressive holy war,” characterized, he says, by the use of “any means necessary to gain momentary advantage.”

3. Barr’s speech to the Fraternal Order of Police

Mr. Barr warned at a DOJ awards ceremony that “the American people have to… start showing, more than they do, the respect and support that law enforcement deserves,” and “if communities don’t give that support and respect, they might find themselves without the police protection they need.”… Mr. Barr did not specify which “communities” were at risk of seeing decreased police protection because they lack respect for law enforcement, but his comment was understood by some observers, not unreasonably, as being directed toward members of communities of color protesting excessive use of force by police.

4. Barr’s television interview about the release of the report from the DOJ Inspector General

Mr. Barr publicly rejected the Inspector General’s findings, asserting instead that a separate ongoing investigation into the FBI’s actions that he personally had directed would likely reach a different conclusion. Although that second investigation (which is being supervised by a different DOJ official) is not yet complete, Mr. Barr nevertheless openly discussed his opinions about the likely outcome of that investigation.

The letter also notes that more than 1,000 federal prosecutors objected to Barr’s mischaracterizations about what was included in the Mueller report. They go on to demonstrate that these public statements are in direct conflict with Barr’s own words about the standards that should apply to an attorney general.

During the 1991 [confirmation] hearing, Mr. Barr recognized that the Attorney General “holds in trust the fair and impartial administration of justice” and bears responsibility “to enforce the law evenhandedly and with integrity.” He also noted that the Attorney General “must ensure that the administration of justice… is above and away from politics,” and that “[n]othing could be more destructive of our system of government, of the rule of law, or the Department of Justice as an institution, than any toleration of political interference with the enforcement of the law.” In 2019, Mr. Barr further explained that the Department of Justice must be a “place[] in the government where the rule of law—not politics—holds sway, and where they [the American people] will be treated fairly based solely on the facts and an even-handed application of the law.”

The cynics among us would be right to suggest that this letter will be ignored by the Republican leadership in Congress. But staying silent in the face of Barr’s conduct is not an alternative. If for no other reason than the historical record, it is important to speak up and document this attorney general’s undermining of the rule of law.

The other issue we face in this Trump era is that it is easy to become inured to the ethical violations of this president’s cabinet. As Paul Blumenthal documented, “no other U.S. president has lost so many cabinet members in his first term to ethical issues.” William Barr, however, is still in office, and the assertions made by the New York City Bar Association are not being raised elsewhere in a way that paints the big picture. Let’s hope that others follow their example..

Nancy LeTourneau has been a contributing writer at the Washington Monthly since November 2014. Before then, she wrote at her own blog, Horizons, for almost a decade. Follow Nancy @Smartypants60