You, Now Streaming On Netflix, Tilts the Rom-Com Into Postmodern Horror 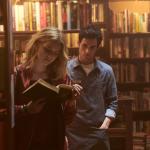 Everything about the Lifetime series You, which recently concluded its first season and just started streaming on Netflix (where it will move for its second season), is a trap.

The show flirts with being outright pulpy trash, then bounces gleefully between genres, underlining the many ways those genres prop up systems that prioritize the feelings and accomplishments of toxic men. Over the course of its 10-episode first season, the show visits the romantic comedy, the “bad boy reformed by a good girl” story, the stalker thriller, and the “girl comes of age in the big city” tale, taking only the parts of these stories it needs, then leaving their corpses moldering in the ground.

But its genre-hopping and its trashier elements are very much intentional. You is a story about what happens when you assume that other people don’t have stories. It imprisons viewers in the point-of-view of Joe (Penn Badgley), a nice-guy narcissist who meets the girl of his dreams, then quietly stalks her to transform himself into her perfect guy. And that’s just his first course of action; from there, he slowly eliminates threats to his dominance over her heart, convinced that he’s protecting her from people who don’t want what’s best for her (like he does). Even when he commits murder, he frames it as chivalric.

This is icky moral territory to wade into at any time, but especially in an era when terrible men are newly exposed every day, and asking viewers to spend a 10-episode season trapped inside the brain of one feels like a tall order. And, to be sure, plenty of critics and viewers have been turned off by the way You doesn’t let you escape “being” Joe in some ways, because it makes his point of view the only one: Anytime someone tells him the truth about what a monster he is, it’s portrayed as an unfortunate setback.

But though I have my own quibbles with the series, I found You frequently brilliant, a thrilling dissection of the stories we tell and the reasons we tell them, with a season finale unlike anything else on TV this year.

You sold itself as a cautionary tale about social media. It’s actually a wicked, satirical tragedy about toxic masculinity. 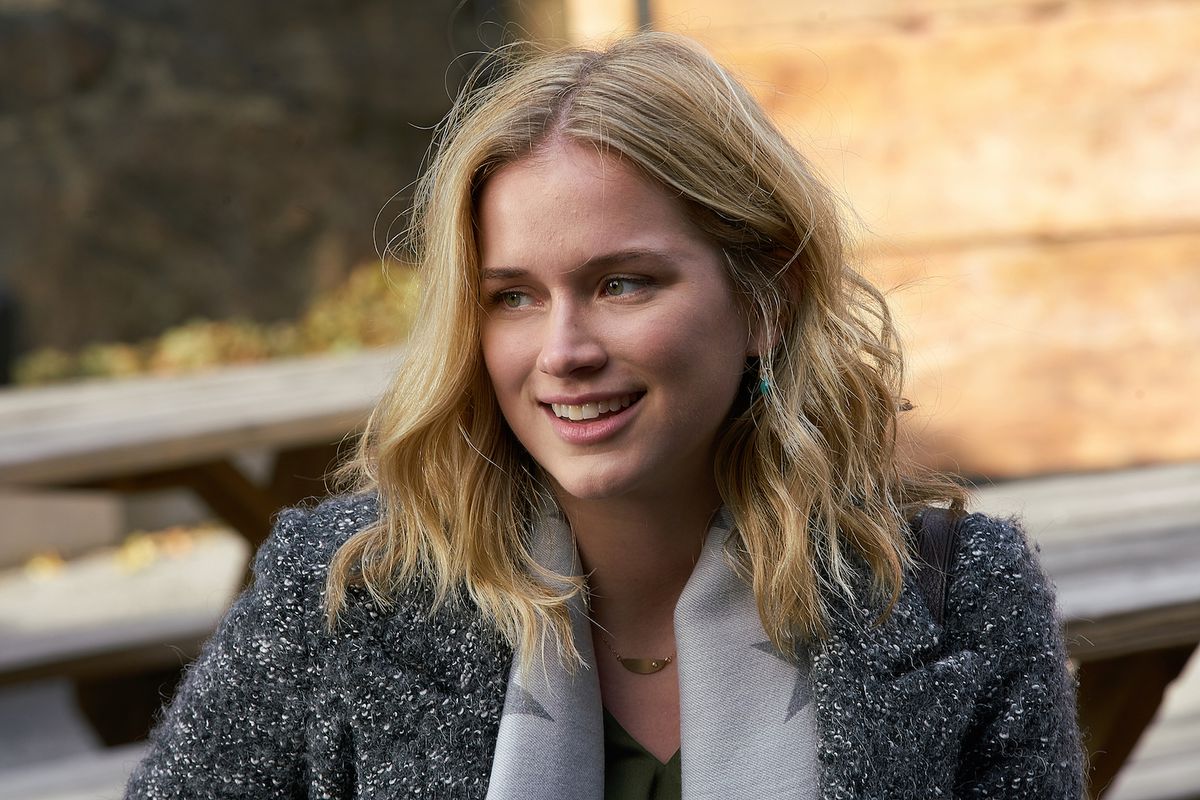 To the degree that You was marketed to the masses, it was marketed as a show about the dangers of social media. And I ... guess it’s that. The ways that Joe stalks Guinevere Beck (Beck to her friends, played by Elizabeth Lail) are largely connected to her social media use. But by the time the two meet in person, very early in the season, he curtails said stalking, because he’s so often with her. Social media is merely how the vampire gets invited into the house; You is far more interested in what he does once he’s there.

The debate around You to this point — insofar as there can be “debate” around a series with such low viewership — largely centers on how sympathetic we’re meant to find Joe. And even I, a fan of the program, will admit there are moments when it seems to tilt slightly too far toward painting Joe as a sort of blundering, unwitting fool: someone who does evil things but who has been so horribly warped by an abusive childhood that he doesn’t know any better.

I had faith in You because of the involvement of co-creator and showrunner Sera Gamble, whose work on Syfy’s The Magicians provides some of TV’s most thoughtful commentary on mental illness and what it means to view everyone around you as a supporting character in your story, rather than the protagonists of their own. But I could see why those who don’t like You feel that its long bath in Joe’s toxicity doesn’t lead to revelation, but to festering sores.

Joe would probably take issue with my list of his crimes, too, only allowing, perhaps, that he has murdered people — though he would surely protest such an accusation by insisting he only killed those people for Beck’s own good. He wouldn’t classify the long list of false pretenses their relationship began under as coercion, or equate the ways that he tries to “protect” Beck to being abusive and controlling.

The trick of You is that because we’re stuck in Joe’s head and because he’s so dead-set on living out his perfect rom-com fantasy, we are forced to constantly question our assumptions about the rom-com fantasy’s mode of storytelling. Just how many rom-coms kinda are built atop a foundation of a guy wearing down a girl’s defenses until she just gives in? You tees up that idea, then uses its horror movie bona fides to push it to its logical, horrifying conclusion.

It’s also telling, I think, that the one time the show escapes Joe’s point of view — and lets us see the world through Beck’s eyes — is also the one time that Joe is truly thrown by something he learns about her backstory. In the season’s fourth episode, “The Captain,” he follows her to a meeting with a man he assumes to be her secret lover. (The two have finally had sex, but Joe lasted only a matter of seconds, which has left him humiliated and certain that Beck will never speak to him again.)

Instead, the man is revealed to be her father, whom she tells her other friends (including Joe) is dead. He’s not. He just left her mother after a crippling drug addiction, then reinvented himself as a born-again Christian. He has a new wife and new kids, and he’s constantly preaching to Beck about how she needs to get her life together. (She’s not here for it.) For this one brief episode, viewers are offered a glimpse into Beck’s psyche, to hear all the things she’s thinking, instead of what Joe is thinking about her.

At first, I thought the fact that You immediately returned to Joe’s point of view was a sign that this early episode was an abandoned experiment. But the deeper we get into the season, the clearer it becomes that “The Captain” is an intentional one-off (indeed, season one never does revisit Beck’s point of view). Joe, who has his own issues with father figures, can actually relate to the idea of a disappointing dad. For a brief moment — one day, really — he’s able to finally see Beck as a human being, instead of a sidebar in his own story. It doesn’t excuse all the horrible stuff he’s done prior to that point, but it temporarily seems like he might realize that the woman he’s “romancing” is a person, not an ideal.

But even in “The Captain,” Joe’s voice works to dominate the proceedings. By episode’s end, when the two have a more mutually satisfying sexual encounter, Beck’s voice has been crowded out once again.

Around the midpoint of You’s first season, I had a sudden realization: The only way the season was going to make sense as a story was if it ended with Joe killing Beck, just as he seemed to have killed Candice, the girl he dated before Beck, who mysteriously disappeared.

Without Joe finally killing the woman he “loved,” You’s underlying skepticism about the stories we tell about men and women wouldn’t achieve the resolution it required. Joe couldn’t win Beck back after a late-in-season breakup or the show would risk contradicting itself. But he also couldn’t handle knowing Beck was living her life without him in it while remaining the same character we’d followed all season long. Hence, murder. (I later learned this is how the Caroline Kepnes novel You, which the series is based on, ends as well.)

That didn’t make the moment when Joe finally did kill Beck any easier to watch, even for someone like me, who enjoys audacious twists. The simple genius of the whole finale — which opens with Joe having imprisoned Beck, then letting her escape briefly before he catches up to her (like the fairy tale character teased in the episode’s title) — is the way it finally gives the audience the catharsis of Beck realizing just what a monster she was dating, while almost never leaving Joe’s point of view. (The brief exception is a tiny moment in the middle of the episode when she somewhat unbelievably writes the heart of a best-selling story collection while Joe has her locked up.)

Beck yells and screams at Joe about how his crimes greatly outstrip whatever he believes her crimes to be. (She slept with someone else while their relationship was in some gray, undefined territory.) She lets him know that even if she was making mistakes in her life, at least it was her life and not some carefully cultivated diorama that he had built for her to wander around in. She tells him outright what a monster he is. 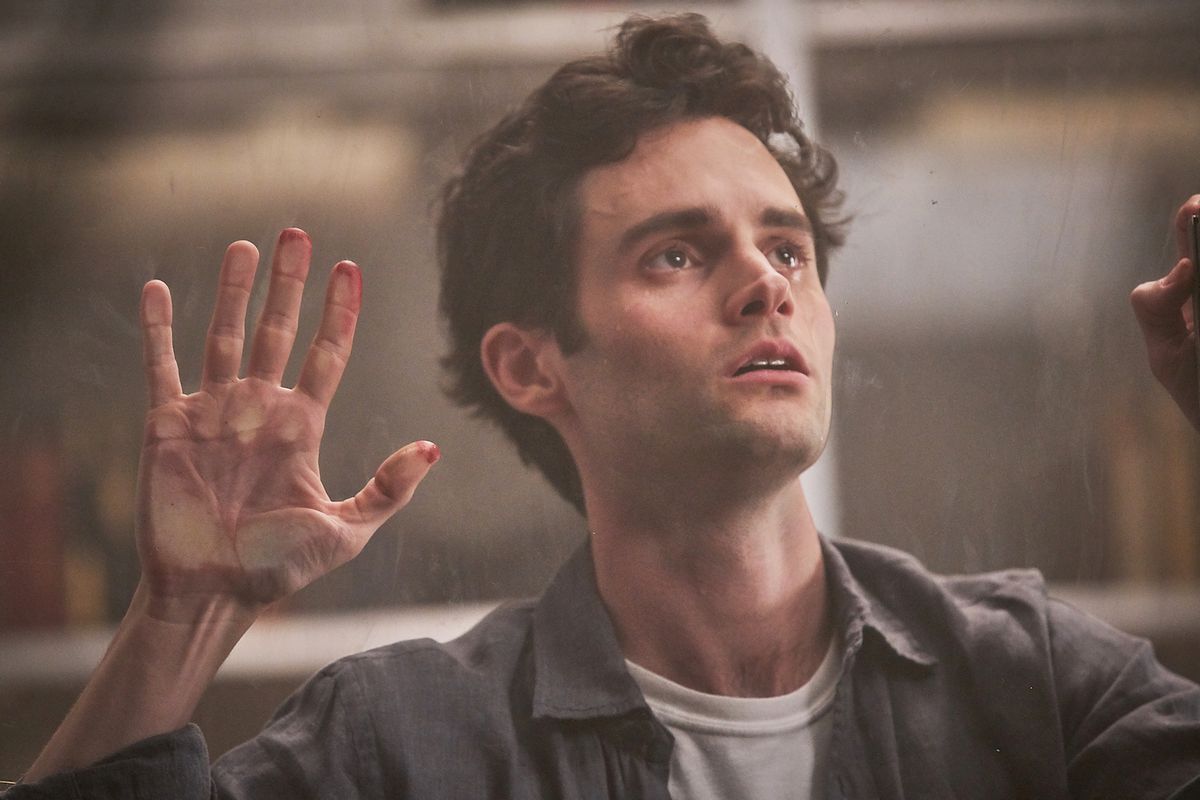 Joe briefly ends up imprisoned in the finale. Not that it stops him.

And all the while, we remain squarely in Joe’s point of view. When Beck tricks him into letting her out of her (literal) cage, it’s by flattering him, by insisting that he definitely knows what’s best for her, and even though I knew she was trying to fool him, You’s insistence on presenting this scene with Joe goggles fully on gave me a brief moment of wondering if the show had lost its mind and really was going to push Beck back toward her stalker and abuser.

And when she yells at him, thinking she finally has the upper hand, the camera gazes up at her from Joe’s point of view on the floor below her — after she has knocked him over — which would traditionally give her some degree of power over him, but she’s also positioned so that she becomes a small figure isolated against a giant black frame. She might be telling him the truth, but the shadow is coming to swallow her up.

The finale’s final knife to the gut is how Joe cheerfully talks about the book that Beck wrote before he killed her — penning some of it while she was in his cage — which is published posthumously. He calls it their last great work together, the fulfillment of her great dream to become a writer. He misses her, sure, but would the book have gotten published if she hadn’t been murdered by her therapist (the patsy Joe frames for his crimes)? Of course not.

In killing her, Joe believes, he’s done her a kindness. It’s his ultimate act of chivalry — finally robbing her of her story entirely and freezing her in time as his great, doomed love, the brilliant writer girl he loved too much to let live.

I have no idea what season two of this show will look like — especially with a late-in-finale revelation that the presumed-dead Candice is actually alive and has returned to continue her unfinished business with Joe. I’ll miss Lail, who brought life and verve to Beck, a character the show’s protagonist kept trying to turn into a living doll. And I’m wary of the fact that any show that roots itself in an awful protagonist’s headspace for so long tends to eventually end up empathizing with him, even inadvertently.

But even if the rest of You turns out to be a catastrophe, I’ll always have season one, a kind of perfect poisoned apple in a year full of them. Joe is so dangerous not because of his crimes, but because it’s too easy to understand how so many people will bend over backward to understand and forgive them.

Season one of You is streaming on Netflix.