In What May be the Largest Strike in World History, Millions in India Protest PM Modi’s Policies 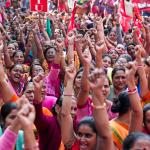 An estimated quarter billion Indians – roughly three percent of the world’s entire population – went on strike today across the subcontinent, protesting the government of Narendra Modi’s racist and “anti-people,” “anti-worker” policies. The protests were called by the Center of Indian Trade Unions (CITU) and are thought to be perhaps the largest in world history.

The CITU has a 12-point charter of demands they have put to the government. The demands include:

Many on the streets are also continuing the protest against Modi’s privatization schemes and racist CAA and NRC acts. The CAA explicitly prevents Muslims (India’s largest religious minority numbering around 140 million people) from neighboring countries to acquire citizenship. The NRC (National Registration Council) overturns all previous citizenship laws, requiring all Indians to provide extensive documentation to prove their citizenship– something hundreds of millions will surely be unable to do. It, therefore, gives Modi and his ruling far-right Bharatiya Janata Party (BJP) the ability to remove citizenship– and therefore virtually all human rights– from any Indian it wishes. The government has already removed nearly two million people’s citizenship in the northeastern state of Assam– around half of them Muslims. It is also currently building a network of “detention centers” similar to those used by ICE in the U.S. to house the newly criminalized population of “illegal immigrants.” In many cases, it is employing those same people to build their own prisons.

The strike is supported by most major unions except for those affiliated with the ruling BJP. It also has the support of the Indian National Congress Party, which ruled the country for decades after its independence from the U.K. Rahul Gandhi, leader of the party until August last year, also estimated that 250 million would be on the streets, tweeting: https://twitter.com/RahulGandhi/status/1214756142494048261

One industry expected to be hit particularly hard by the strike today is banking. Nearly aquarter of a trillion Rupees (≈ $3.1 billion) in bank transactions are set to be hit throughout the day, as ten unions from the finance and insurance sectors, representing around half a million workers, join the strike.

A common tactic of the strikers across the country is to occupy railway lines, shutting down India’s most important and iconic transport network, effectively paralyzing the country. Representatives of India’s coal unions also announced that its 600,000 members would join the strike, despite an order from the management of Coal India Ltd. not to do so. Many of the country’s enormous population of agricultural workers are expected to down their tools as well.

News of what is billed by supporters as the world’s largest strike has been hard to come by in Western sources. In fact, there has been an almost complete media blackout of the subject. A search for “India strike” into Google’s news search engine as of 23:00 India standard time (in other words after an entire day of unrest) produces just one result from a Western news organization; a short article from Reuters claiming that only “tens of thousands” are on strike. While numbers for simultaneous demonstrations happening across a subcontinent can never be gauged completely accurately, what is striking is the complete disinterest in such a large revolt from international media organizations.

Modi sees himself as part of the global wave of far-right leaders (such as Bolsonaro in Brazil and Orban in Hungary) who have come to power in the wake of the global economic downturn of 2008. In December, Indian intellectual Vijay Prashad described Modi’s ideology as a perfect blend of Indian fascism and hard neoliberal economics, combining Hindu nationalism with a package of privatization of state resources. In September, the prime minister came to the United States to attend a “Howdy Modi” summit in Houston, TX, where he embraced Donald Trump as a kindred spirit. And in April, he used the opportunity of International Peace Day tothreaten to drop nuclear bombs on Pakistan.

Despite the fact that today’s actions show that there is stiff and nationwide opposition to his Hindu chauvinism, he continues to retain high approval rates, while his ruling BJP party celebrated a resounding victory in the elections of April/May, winning 303 of the 545 seats in India’s lower house, a margin of victory rarely seen in a multi-party system.

Modi’s government warned that “any employee going on strike in any form would face the consequences,” while the Supreme Court claimed that protesting today amounts to “grave misconduct,” suggesting that the government sees the nationwide strike as a threat to its legitimacy. Strikers claim that it is just this authoritarian sentiment they are opposing.

Alan MacLeod is a Staff Writer for MintPress News. After completing his PhD in 2017 he published two books: Bad News From Venezuela: Twenty Years of Fake News and Misreporting and Propaganda in the Information Age: Still Manufacturing Consent. He has also contributed to Fairness and Accuracy in Reporting, The Guardian, Salon, The Grayzone, Jacobin Magazine, Common Dreams the American Herald Tribune and The Canary.