We’re Lucky to Have Little America 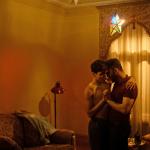 Episodic anthology shows are a real mixed bag. For a while, I’ve held a firm “anti” position, thanks to the treacly, smug patness of Modern Love, the diminishing returns of Black Mirror, the underwhelming Twilight Zone remake, and the overrestrictive conceit of Room 104, which makes even its great episodes seem like they’re filling in a worksheet. There are a few shows that really test my distaste, though. There’s Documentary Now, which is more than welcome to keep doing whatever its weird heart desires. There’s High Maintenance, which makes surprise feel welcome rather than obnoxious. And now there’s Little America, a show which I was not prepared to love and then absolutely did.

The Apple TV+ streaming series presents a new kind of publicity challenge for the outlet, whose previous releases all had big, buzzy draws of some sort. The Morning Show is almost unsustainably large in terms of both its star power and its budget. Dickinson, a much smaller and less obvious title to hang a launch on, nevertheless had the benefit of being extremely weird and beloved in niche corners. Shows like See and Servant have an explicit genre appeal. But Little America is like its name: a very small show with reasonably well-known producers (Kumail Nanjiani and Emily V. Gordon) but few big-name actors or directors attached to it. There are eight half-hour episodes. Their scope is modest. The stories, which are sometimes delightful and sometimes tragic, are about relatively everyday lives. The show is beautiful.

Right out of the gate, Little America pulls an effective, remarkable bait and switch. The first episode, “The Manager,” tells the story of a boy named Kabir (played by Eshan Inamdar and later by Suraj Sharma). His parents run a motel, but when it becomes clear that their visas haven’t been extended and they could be deported, they make the choice to go back to India, leaving middle-school-aged Kabir in charge of the business. After Kabir’s parents leave, it looks for a moment like “The Manager” is going to be a certain kind of story about immigration and America. Kabir has always loved words and spelling, and after he writes several letters to the government that fail to create any motion on his parents’ case, Kabir decides to go to the National Spelling Bee. For Kabir, the point is not to win. The point is that he’s heard finalists get to have a face-to-face meeting with Laura Bush. Kabir hopes that if he meets her, he can plead his case. He wins spelling bees. He goes to the national event. He becomes a finalist. He meets Laura Bush, and he stands up to read a letter about his parents and how he desperately needs them to come back.

A lesser show would’ve made this the arc. It’d be so heartwarming and easy to twist the story this way, to have Laura Bush clutch this little kid in her arms and promise to make things right. It would turn Little America into a show that looked like the “shining city on a hill” rhetoric that has so rarely matched up with the reality of the immigrant experience. That’s not the choice Little America makes. Instead, Laura Bush does little to help Kabir, and the end of “The Manager” is a fantastic wash of emotional nuance, happy in some ways and devastating in others. It has no interest in simplifying or sanitizing the mess of Kabir’s story, and rather than trying to shape everything into a tidy package, it concludes with an image that amplifies the pain and sorrow of it all, in spite of what looks superficially like a happy ending.

Watching Little America, I realized that my aversion to episodic anthology shows doesn’t have to do with the form itself. It comes from the fact that it’s really, really hard to create characters wholesale, give them lived-in worlds, build an entire plot arc, and find wells of emotional complexity in the space of a single episode. I love stand-alone episodes and episodic storytelling in other TV series because they often capitalize on their own emotional complexity by using all the characters and worlds a series has already built. But few episodic anthologies have managed the trick of making entirely new stories each episode while also ensuring the emotional reality lands somewhere more complicated than “aww” or “oh no, dystopia.” Little America is one of the few that really pulls it off.

Each episode is entirely different — different casts, different kinds of protagonists, with stories about immigrants from different countries. But while Little America’s main connective theme is “immigrant stories,” the deeper and more meaningful through line is its refusal to bow to the simplicity of short truisms about its subjects. They are “hard work pays off stories,” and they are “immigration is hard” stories, yes. But each of them is also much more lovely and painful and complicated than those easy summations.

My lone qualm, my single point of doubt about the whole series, comes very briefly at the end of every episode. Each entry in Little America is based on a real story originally featured in Epic magazine (owned by Vulture parent company Vox Media, which serves as an executive producer of the series), and each episode ends with one or two photographs and one or two lines about the real person who inspired it. As Emily Yoshida wrote for Vulture on this phenomenon, the real-life-photo-at-the-end thing is “the cinematic equivalent of overachieving middle-schoolers waving their completed homework at the teacher two days before it’s due, eager and desperate to prove that they’ve done the work.”

“‘See, this all really happened!’” Yoshida imagines the filmmakers saying. “‘See, we didn’t lie!’” That impulse is definitely at play in Little America, that anxiety to prove that these stories have meaning — have extra meaning — because they are also real. But I’m more inclined to excuse it here. For one, each episode is artfully made, so much so that the art of it makes the real-life element feel more like a foundation than a justification. Little America gets away with telling belief-suspending stories because it tells them well, not because it has the “but it really did happen!” certificate of authenticity.

The other reality is that this moment in political history gives real immigration stories a different sort of power. Little America wants to give its episodes extra meaning by being based on truth, because, especially right now, it is heartrending and lovely to see stories about American immigrants that are based on real lives. We are lucky we have Little America here to do it.