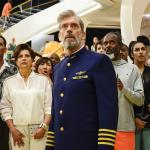 "A problem is just a solution without a solution," one of the hapless protagonists declares early on in HBO’s spoof sci-fi series "Avenue 5." It's a line that manages to parody both the nonsensical can-do corporate rhetoric and the nonsensical can-do dialogue of a lot of science-fiction adventure shows. “Avenue 5” parodies the way science fiction caters to our fantasies about progress and competence. We like to think that technocrats and engineers are addressing serious problems seriously, or are trying to. But "Avenue 5" suggests nobody really knows what they're doing — even in space.

The series is set on the eponymous space vessel, which is taking thousands of passengers on an eight-week pleasure cruise through space. The crew accidentally turns off the artificial gravity, sending a yoga class bashing against the wall, and knocking the ship off course enough to extend its journey three years.

The HBO series was created by Armando Iannucci, best known as the political satirist behind the television series “Veep” and the director of films "In the Loop" and "The Death of Stalin." Iannucci generally targets the politically powerful directly, portraying American, British and Russian politicians as venal, shallow bureaucrats. "In the Loop" is about British officials rushing to sacrifice tens of thousands of lives for their own career advancement in the run up to the Iraq War.

"Avenue 5's" satire is less directly political, but it's perhaps more surprising. Everyone loathes politicians. In pop culture starship captains, though, are supposed to be admirable, or at least competent.

Science fiction of course has its mad scientists who warn of the dangers of technology and knowing too much. But it also has a long tradition of leaders and miracle-worker tinkerers, from Captain Kirk to Doctor Who, who are paragons of expertise and inspirational competence. The Marvel Cinematic Universe for the last ten years has focused on the amazing genius of Tony Stark, a character patterned on tech entrepreneur Elon Musk. Tony's superpower is less his Iron Man suit than his ability to solve any problem with a gadget, a plan or a quip. When Stark saves the universe in "Avengers: Endgame," he's demonstrating the hip genius of the technocratic elite, who understand the mechanisms of the future and will use the first to guide us through the second.

The guy in charge of Avenue 5, Herman Judd (Josh Gad), is a billionaire, but there the resemblance to Tony Stark ends. Judd is a self-obsessed ignoramus whose arrogance causes the shipboard catastrophe.

The other folks in charge aren't much more reassuring than Judd. Rav Mulcair, head of Mission Control on earth, is played with a despondent mix of exasperation and futility by Nikki Amuka-Bird. Engineers like Billie McEvoy (Lenora Crichlow) know how the spaceship works, more or less, but they bumble around and are blinded by self-interest just like everyone else. One engineer notably suggests that they get back on course by throwing 500 passengers into space to adjust their weight.

There have been other space spoofs, like "The Hitchhiker's Guide" series and "Airplane 2: The Sequel." Those predecessors, though, were farcical and filled with absurdist bombast — alien poetry, scheming mice, killer computers.

"Avenue 5," in contrast, is, at least through the four episodes available for review, relentlessly small as life. There are no monsters or space wormholes. Instead, the problems the crew faces are mostly caused by their own incompetence, failure to communicate and unwillingness to accept that you can't change the laws of physics to suit yourself.

If you don't vent the ships waste, for example, predictable disasters result. Customer relationship specialist Matt Spencer (Zach Woods) epitomizes the crew's approach as he focuses not on helping passengers, but on assuring them they are being helped. "I would love to disburse your irritation," he tells a particularly aggressive passenger, before ducking out without doing anything.

Ryan Clark (Hugh Laurie) is tall, handsome and comfortingly bearded. But we quickly learn that he's been hired specifically for his aesthetics.

There is one man on the ship who looks the part of Kirk, Stark, or other high-tech action movie leads. Ryan Clark (Hugh Laurie) is tall, handsome and comfortingly bearded. But we quickly learn that he's been hired specifically for his aesthetics. He knows nothing about spacefaring or space ships and was simply brought on board as a reassuring presence to calm the passengers, who apparently (like us) have watched too much “Star Trek.”

Media often sells us the narrative that somewhere out there, in Silicon Valley, in Washington D.C., or on the bridge of a starship, some brave, knowledgeable person is planning a better future. Everyone wants to think that someone competent is at the helm, be it Jean-Luc Picard or Bill Gates.

On Avenue 5, though, no one can fix anything and if they tell you they can, they're probably lying to get you to stop bothering them. There are a lot of science-fiction utopias and a lot of science-fiction dystopias, but "Avenue 5" perhaps offers the bleakest vision — a future in which, without hope of escape, we're still being piloted through space by billionaire fools and their stooges.

Noah Berlatsky is a freelance writer and cultural critic based in Chicago. He edits the website The Hooded Utilitarian and is the author of several books, including most recently "Wonder Woman: Bondage and Feminism in the Marston/Peter Comics, 1941-1948."