What Do Swing Women Voters Want? 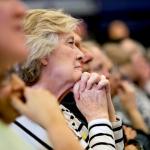 On a cold night in January, I canvassed in rural Hudson, Wisconsin. Because it was so cold—about 4 degrees—Nancy and Ted invited me and fellow canvasser Ginger to come inside. They had both supported Trump in 2016, but Nancy was disappointed. She didn’t like the border wall, she didn’t think the tax cuts were fair, she thought it should be easier to join a union. She would consider voting for a Democrat. Ted gamely tried to hold his ground while she glared at him. The tax cuts were actually good for them, he said; he could understand the need for a wall, he didn’t think he’d be voting for a Democrat.

It’s not news that some women Trump voters are regretting their vote more than some men. “The one pivotal group showing the most evident signs of splitting from the president are white working-class women,” according to David Catanese at political news site Impact2020.

The new Front Porch Focus Group from Working America, the labor movement’s field organizing arm, also has found that division. Among white noncollege voters, women were twice as likely as men to say that Trump’s policies had hurt others, and these women opposed the border wall at a rate 12 points higher than the men.

These voters may be “swing,” but they aren’t necessarily middle-of-the-road when it comes to policies, and that’s even more true of the women.

What is surprising is that swing voters are as receptive to progressive policies as the Democratic base. These voters may be “swing,” but they aren’t necessarily middle-of-the-road when it comes to policies, and that’s even more true of the women. A whopping 67 percent of white noncollege women supported a Green New Deal, compared to a still impressive 54 percent of men, although they were responding more to the brand than the details of the policy. Sixty-two percent of women compared to 54 percent of men opposed Trump’s tax cuts. And nearly two-thirds of all these swing voters thought it should be easier to join a union.

But we’ll make a mistake if we don’t dig deeper.

In Macomb County, Michigan, I talked to Carol and Beverly, who live down the street from each other, both retired and both Obama-Trump voters. They don’t know each other, but they shared a lot of the same opinions. We need big changes in health care, they said; the tax cuts weren’t fair, the economy wasn’t better or worse for them. Carol said health care was one of her top issues, but she is also worried about what she sees as political correctness. “I’m not prejudiced. My brother died of AIDS and my sister is married to a woman, but do we really have to pay that much attention to pronouns?” Carol is definitely voting for Trump. Beverly isn’t paying much attention to the Democratic primaries, but she can’t see herself voting for Trump again. Carol and Beverly look the same in a data profile. It took an in-person conversation to find out how different they are.

There is a narrow path to beating Trump in 2020, and it goes in part through these swing women voters. The good news is they are looking for serious answers to big problems. But there are no shortcuts. For decades, much of the progressive movement has failed to engage these women. To win the election, we need to know who are the Carols and who are the Beverlys, and we’ll only know that if we are talking to them now and making them part of our movement in, and for, the future.

[Karen Nussbaum is the founding director and a member of the board of Working America, AFL-CIO, and was co-founder and director of 9to5, National Association of Working Women and president of District 925, SEIU.]