“The Labor Movement Needs to Learn Its History” 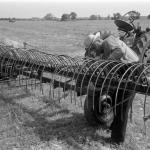 At the height of organized labor in the 1950s, 28 percent of American workers were unionized. But after decades of union-busting, right-to-work legislation, and the loss of union jobs, membership has now sunk to just 10 percent of workers, or just 6 percent in the private sector.

The past two years have bucked this trend however, and a resurgence in union activity saw more than four hundred thousand workers, including teachers and nurses, go on strike in 2019. As American labor militancy grows again, it’s important to study the movements of the past. In the radical history of American unions, the story of United Farm Equipment Workers of America (FE) stands out. Despite its small size, the FE challenged and won major concessions from International Harvester, a manufacturing titan run by the oligarchs of the McCormick family, throughout the 1940s.

To learn more about the FE and its struggles, and what organizers today can learn from their efforts, Jacobin spoke with labor historian Toni Gilpin, author of The Long Deep Grudge: A Story of Big Capital, Radical Labor, and Class War in the American Heartland.

Growing up, what did you know about the FE, and what made you decide to research it in an academic capacity?

When I was growing up in the ’60s and ’70s, my father, Dewitt Gilpin, was the legislative director for Region 4 of the United Auto Workers. I knew the UAW from accompanying my dad to political banquets or picket lines or labor education programs that he was often involved in, [but] I knew only vaguely that there had been this other union that my father had been involved in before I was born — the Farm Equipment Workers. He clearly felt that there was something special about that union and also believed — and this is backed up by what analysts also say — that the contracts with FE, which had originally been generated by the farmworkers in the UAW, were the best that union members had anywhere.

When I was in college, shortly after my father died, I was going to do a senior thesis in history, and I knew I wanted to do something in labor history. Absolutely nothing had ever been written about the FE, so I thought I would begin to explore that history. It was generated as a college thesis for me way back in the 1970s and expanded from there when I went off to graduate school.

How has your understanding of the labor movement changed since that time?

After college, I went to Yale to study labor history with David Montgomery, who was the preeminent American labor historian, and I was fortunate to be among a cohort who were reinvigorating that field and looking at labor history and working-class history from the bottom up.

While I was there, the clerical workers at Yale underwent an organizing drive and then a strike, so I got very involved in that. That’s how I met my husband, who was in law school then. And so not only was I studying labor history while at Yale, but I was actually getting to witness it. That was a really important strike for women workers, for university workers. My husband and I ended up coauthoring a book about the Yale strike, along with two other academics from Yale.

Watching that rank-and-file organizing drive informed what I knew about organizing and labor history, but that was one of the few, or maybe only, labor victories in my young life. I also was in graduate school during the PATCO [Professional Air Traffic Controllers Organization] strike, when it became markedly obvious that the labor movement was really in deep trouble.

After that, we’re talking about the ’90s when the labor movement was continuing its precipitant decline. I had written a dissertation about the FE, and I believed that its story was really relevant for understanding what had happened and why the movement had declined. But it didn’t seem as though there was that much of an audience for that story at the time, when the labor movement was seemingly in free fall, during the Reagan era and then the Clinton era.

It was only during the second Obama administration, with the Bernie campaign and the beginning of some revival of the labor movement, that we saw a renewed interest in socialism. It just was fortuitous that there was an audience for this story about the farm equipment workers and the lessons that it can bring to those who are looking to figure out how to further revive and reinvigorate the labor movement today.

What lessons do you think people can draw from the Farm Equipment Workers?

For socialists, there are several important things to think about when we’re looking at this history. First is how much the ideology of a union leadership matters. I believe the left-wing Marxist orientation of the FE leadership affected everything that the union did. Not just the political positions that the union staked out, but also the behavior that orientation encouraged among the membership.

The belief, as one of the union leaders says, that management had no right to exist embeds itself all the way down to the rank and file and engenders this kind of everyday confrontation with management that means ultimately good protections for workers on the shop floor.

And then part of what’s really central to this story is the FE’s insistence that racial unity was essential to working-class advancement and that they would have to combat racism where they saw it. Not just because it was morally wrong, but because it was detrimental to the interests of the working class, and you couldn’t have a strong union unless you made the rank and file understand that.

They did that where it was difficult — in the American South post–World War II. It was a difficult fight, but an important one, that not only affected what the union did in terms of its strategizing, but also the personal relationships that developed between black and white workers in unexpected and really significant ways.

The book is wide in scope, and begins in the 1870s with the Cyrus McCormick’s Reaper Works, and covering labor conditions in Chicago and the Haymarket bombing. Why did you decide to start at that point?

The title comes from the great Nelson Algren in Chicago: City on the Make, which talks about this long deep grudge that was generated by the execution of the Haymarket anarchists. Many people who know just even a little bit about labor history know about Haymarket. What people don’t necessarily know is this connection to the McCormick Reaper Works in Chicago, and that particular plant’s evolution into International Harvester.

I wanted to connect that because, for the FE, their connection to the Haymarket martyrs is something that they nurtured. That long story of struggle was something that animated the leadership and that they tried to communicate to the rank and file. For working people, struggles go on for decades and centuries, and those earlier struggles are always informing what we’re doing today, even if we might not recognize it.

But I also did want to show the innovations and adaptations that the management of International Harvester — largely the McCormick family — took as they quelched the craft union organizing of the nineteenth century and smashed the union that existed in the plant during the Haymarket uprising. International Harvester became an innovator in all the kinds of union avoidance strategies that remain important in industrial relations today.

It was important to show the long struggle of the working class and the long history of union-busting and “weeding out the bad element,” as Cyrus McCormick II said [about] getting rid of working-class radicals and union supporters.

I thought it was interesting how effective the FE were at drawing a line between what happened at Haymarket and their own struggles sixty years later. Do you think that’s something modern unions are good at communicating?

Most unions pay lip service to the importance of recognizing those struggles. I don’t think they’re especially good at labor education and labor history, which is part of the reason I wrote this book.

I think what we need to do is not simply commemorate with pictures of a strike. What the labor movement needs more of is an analysis of history that can inform worker struggles, but that is also accessible, engaging to read, and really grapples with important issues. It isn’t just a celebration of those successes that labor has had. We’re down to 6 percent unionization in the private-sector workforce — the lowest level of unionization since they’ve been keeping those records — so we need to come to terms with how that happened.

People like to look at the 1930s — the era of turbulence and sit-down strikes, general strikes, and confrontations between labor and management — but the 1920s, which is believed to be one of quiescence and accommodation, is the era when International Harvester introduces its company unions, which make it easier for the company to identify activists and defuse any kind of union success. But an organizer named John Becker tries to take this on and speaks up in these company union meetings, and that’s where worker radicalism gets rekindled again in the 1930s.

Without people fighting in those periods that seem quiet, we wouldn’t have had the seemingly spontaneous explosions of the 1930s. That’s why it’s so important that working-class radicals and activists recognize that what they’re doing now in their workplaces and in their communities might seem small, but it has a ripple effect that you can’t even begin to understand until you have that historical perspective.

It’s not just those periods or moments of great uprising that have significance for understanding working-class and union accomplishments. It may be those periods when that’s not happening that we need to look at the most closely.

Toward the end of the book, reflecting upon the union’s legacy, you discuss not only what the union achieved, but also the energy that animated the union and made such grueling work bearable. How do you think unions can achieve and maintain that kind of energy?

One of the things that happened was that unions decided, as the UAW did, that the main function of a union was to provide good wages and benefits, and that the job of the union leadership was to negotiate those things. But the rest of the time the union is not really that critical to a worker’s life. It’s not a day-to-day integral institution for them.

One of the reasons why the FE maintained such rank-and-file loyalty was that it believed in involving union members 365 days a year in this struggle with management. The union becomes something that’s part of your daily life. Every time you go to work, you know it operates to protect you. You had workers engaged in these constant battles with management on the shop floor about how fast they had to work, and how much they were going to get paid for the work they were doing. And you had the union there constantly intervening on behalf of workers to protect their interests, not just at contract negotiation time, but every day you have this army of stewards who were there to protect workers’ interests.

Unions that believe that their only job is to deliver at contract time and then disappear are those that can be easily undermined and overwhelmed by savvy management.

Toni Gilpin is a labor historian, activist, and author of The Long Deep Grudge: A Story of Big Capital, Radical Labor, and Class War in the American Heartland (Haymarket Books, 2020).

OUR NEW PRINT ISSUE, “POLITICAL REVOLUTION,” IS OUT NOW.  GET A DISCOUNTED SUBSCRIPTION TODAY.