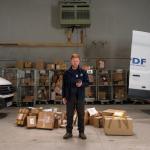 Ken Loach’s Sorry We Missed You is a devastating portrayal of the toll that contemporary ultra-flexible work arrangements take on workers and their families in the UK.

The movie follows Ricky, a package delivery driver, and Abby, a home healthcare worker, as they try to juggle their ever-expanding workdays with being parents to their two children.

The film opens with Ricky in a job interview, rattling off the dozens of jobs he’s had over the years, mostly in construction. His prospective employer, Gavin, responds with a string of double-speak about the position Ricky is about to take on:

You don’t work for us, you work with us. You don’t drive for us, you perform services. There’s no performance targets, you meet delivery standards. There’s no clocking on, you become available. There’s no wages, but fees. Like everything around here, Ricky, it’s your choice.

Before he can take the job, Ricky has to secure a delivery van, and his choices are purchasing (actually, financing) one or renting one from the company. He chooses the former. To come up with a down payment, he has to sell his wife Abby’s car.

The problem is, Abby uses that car to drive between her elderly or disabled housebound clients, whom she prepares meals for or bathes or helps with toileting. Without her car, Abby has to rely on the bus or walk long distances between appointments, one- or two-hour chunks scattered disparately throughout the workday. Pounding the pavement adds to her fatigue and stress, and her clients feel it as well.

The two spouses suffer two of the most insidious and ultra-precarious forms of work under neoliberal capitalism: independent contractor status, and zero-hour contracts. Abby’s zero-hour contract means that she is guaranteed no set hours of work in a week, but instead gets given work assignments, probably by a third-party agency. This kind of relationship satisfies the employer’s staffing needs while keeping workers desperately vulnerable, quickly punishing those who don’t bend to the exacting terms. In Abby’s case, her genuine concern for her charges also picks up the slack, motivating her to go to them day or night as they need her, regardless of the toll on herself or her family.

In Ricky’s case, his independent contractor status forces him to absorb all of the risks of his industry on behalf of the employer. He not only saves his employer the cost of the vehicle, but insures it himself, finds his own replacement when out sick, and even covers the cost of stolen packages when he gets robbed. This is another form of extreme discipline under capitalism: workers receive no benefits or job security from employers, who disclaim them as employees and yet control when and where and how they work. “Independent contractor” status – which often also involves workers signing “non-compete policies” preventing them from working for the competition – is an increasingly popular fiction across the economy.

Neither Abby nor Ricky have any room for error, nor anywhere to turn when their absence from the family begins to take its toll in their teenaged son’s behavior. There is a moment when Ricky begs his boss for time off to devote to his son, who has just been suspended from school. Gavin replies with a list of family troubles that other drivers have approached him with in the last week – aging parents, sick spouses, alcoholic siblings – all of whose requests for time off he has turned down. It’s an interesting moment in the film: one is reminded how, especially in a downtrodden working class, every worker has a problem, and the one person who knows this best of all is the boss. Gavin says he knows he is hated for refusing to accommodate the drivers, but if he were to give in, his depot’s productivity metrics would start to fall, and the depot would lose business to others across town. He holds up the scanning device that logs all packages and tracks all deliveries, that drivers like Ricky carry with them all day long: “this,” he says, “decides who lives and who dies.”

Sorry We Missed You vividly illustrates of how much class relations have come full circle back to the naked exploitation of 19th century capitalism, when workers’ meager wages were paid in scrip for the company store. Today’s employers catch workers coming and going, paying as little as possible while devolving all risks and disclaiming all obligations, even fining them for infractions. In the UK, this flexibilization of the labor force is abetted by the state: “welfare reform” has thrown more and more individuals into these kinds of precarious employment scenarios, while sloughing them off the state rolls when they are deemed guilty of failing to secure better employment.

These work arrangements were designed to take away from workers the one potential they had: coworkers they could organize with to reverse the balance of power with the boss. (One sees glimpses of Ricky’s coworkers but none of Abby’s.) And yet, despite this, it remains possible for workers like these to come together and organize.

The film does not show this, although there are tender moments of solidarity between members of the working class. The credits thank “The Drivers And Carers Who Shared Information With Us But Did Not Want To Give Their Names.” Ken Loach, long a champion of working-class struggles, has crafted a film as taut as a thriller, which one watches with mounting anxiety and fear about where these tensions will ultimately end.

A list of upcoming screenings in the US is available here.