"Cuba's Cancer Hope": Cuba's Revolutionary Cancer Vaccine Builds Brdiges Between the Island and the US 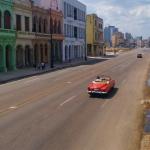 Despite the fact that Donald Trump's government is determined to continue sanctioning Cuba - the charter flights from the U.S. to nine Cuban airports were suspended last week because of the country's support for Maduro's regime, according to statements by Secretary of State Mike Pompeo - the collaboration between the United States and the island continues, at least on scientific matters. And this should not surprise us, taking into account the great medical advances made by Cuban professionals in the treatment of various types of cancer.

This is what we'll be able to witness in "Cuba's Cancer Hope," a documentary by Llew Smith that will be released next April by PBS and that sheds light on CimaVax, a revolutionary treatment against lung cancer that prolongs the life of patients in very advanced stages and that the Center of Molecular Immunology (CIM) in Habana has taken more than twenty years to develop.

In fact, the results are so encouraging that the Roswell Park Comprehensive Cancer Center in New York soon joined the project and will be the first U.S. institution to conduct a clinical trial of the drug produced on the island.

"The future of our country must necessarily be a future of men of science and thought, because that is precisely what we are sowing most," Fidel Castro, 1960.

Llew Smith himself was one of the volunteers to test this pioneering treatment, according to Prensa Latina, and his results, which were made known two years ago, will be part of the documentary.

"The wonderful thing about working with our Cuban colleagues is that they really believe, in their heart of hearts, that medical care is a human right," said Dr. Kevin Lee, director of the Roswell Park immunology department, in a dialogue with the press, praising the medical advances being made in Cuba and its "great potential to treat and prevent cancer of various kinds."

Biotechnology is one of the most developed branches of Cuban science, which began to be promoted in 1980, when Fidel Castro's government created a group dedicated to the production of interphenon, a possible cancer drug, in addition to promoting scientific parks.

This is a commitment to progress that the current president of Cuba, Miguel Díaz-Canel Bermúdez, acknowledged to Castro on the occasion of the documentary, and which the late revolutionary leader already advocated in a speech made in 1960 when he said:  "'The future of our country must necessarily be a future of men of science and thought because that is precisely what we are sowing most."

But the CimaVax is not the only discovery of Cuban scientists, whose achievements can be traced in the history of the island:

In 1881, the scientist Carlos Juan Finlay was the discoverer of the agent that transmits yellow fever, the Aedes aegypti mosquito, which made it possible to clean up the areas invaded by this infectious agent and which, in the end, has prevented millions of deaths.

"The wonderful thing about working with our Cuban colleagues is that they truly believe, deep in their hearts, that medical care is a human right," Dr. Kevin Lee from Roswell Park.

Also at Cuba's Center for Genetic Engineering and Biotechnology (CIGB), Heberprot-P was developed, a unique drug that prevents the amputation of diabetic feet by healing ulcers.

In addition, Cuba was recognized by WHO as the first country in the world to eliminate mother-to-child transmission of HIV.

The documentary "Cuba's Cancer Hope" also includes other therapies being experimented with on the island, specifically for the treatment of different types of cancer, which once again confirms that scientific advances are breaking down the walls that apparently separate us.