Labor Party Time? Not Yet. 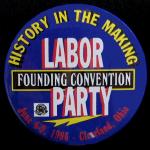 During the first of the 2012 presidential debates, President Obama opined to Governor Romney, "I suspect that on Social Security, we've got a somewhat similar position." This should come as no surprise to those of us paying attention. Since at least July of the previous year, President Obama has been dangling a "grand bargain" in front of congressional Republicans: cuts in Social Security and Medicare in exchange for a temporary agreement to raise the federal debt ceiling. While Republicans continue to hold out for deeper cuts and more extensive concessions, this offer is still very much on the bargaining table. And it is sure to be part of the post-election "fiscal cliff" negotiations.

That a Democratic President would be willing to trade away the crown jewels of the social safety net that have defined the party's identity in the minds of millions of Americans for generations is astounding. Coming after the Obama Administration's first-term failure to deliver on its campaign promises to labor on job-creation and labor law reform, its embrace of the "Bush Doctrine" and escalation of war in Afghanistan, and its repeated capitulations in the fight to pass substantive health care legislation, the proposed gutting of Social Security and Medicare should have marked the date when labor finally disowned the Democratic Party and declared its support for the establishment of a political party with a working-class agenda. Instead, one union after another rushed to endorse Obama for a second term, asking for little or nothing in return.  Obama owes his re-election to the labor movement. Its massive ground campaign mobilizations surely made the difference in the key battleground states of Ohio, Pennsylvania, Michigan, Wisconsin, and Virginia. Labor did so mainly because the "greater of two evils" alternative-the inauguration of a national union-busting regime committed to a Greek-style austerity program-was, quite simply, unacceptable.  But the question still must be asked: will labor, as a social movement, be stronger in four years than it is today? Will the lives of working people be better or more secure?

The history of the past four years is instructive. Despite winning the presidency and both houses of Congress in 2008 on a platform of hope and change, the Democratic Party failed abjectly to articulate, much less implement, a program enabling ordinary Americans to recover from the worst economic meltdown since the Great Depression. This failure generated a political crisis with two exceptionally different expressions. On the one hand, it fueled a right wing, populist rage that pits workers who have lost secure jobs and decent benefits against those workers-many in the public sector-who have managed to maintain them. By scapegoating "underwater" homeowners, immigrants, and other victims of the economic crisis, this "populism" diverts anger away from the Wall Street bankers who caused the crisis while pursuing a political agenda that threatens to repeal the major social gains of the past 100 years. Although it purports to speak for small business folks and hardworking Americans, this Tea Party movement offers nothing in the way of real relief. While its momentum may have peaked shortly after its stunning successes in the 2010 midterm elections, the results of the June 2012 Wisconsin recall election and its repeated use as a Republican trope in the fall elections bear testimony to the continuing appeal of a well-financed and well-publicized right-wing popular base which uses the familiar themes of racism, religious and nationalist bigotry, and intra-class resentment to advance its anti-government agenda.

On the other hand, the current political crisis is also the reason why the Occupy movement resonated with many Americans. For all its shortcomings, it successfully articulated the impact of the current economic crisis in class terms. Occupiers focused on a critique of the shortcomings of capitalism rather than simply a temporary quick fix to the current crisis. It may well have been the first critique of neoliberalism to gain significant traction in the United States. However, while the movement may have helped shift the terms of debate, its lack of organizational unity, ideological coherence, and institutional support clearly are factors in its inability to coalesce into a serious alternative to our current two-party political party system - one that is clearly dominated by the "one-percent".

Unlike nearly every other industrialized country in the world, the U.S. working class has not succeeded in developing a class-based political party substantial enough to contend for political power. Instead, from the Great Depression through the 1970s, a private welfare state, negotiated via individual union contracts and adopted by "me-too" non-union corporations and supplemented by a relatively meager social safety net, provided a rising standard of living and a modicum of security for working Americans. This arrangement, however, has made working people in the United States particularly vulnerable to the ravages of neoliberalism. Indeed, for the past thirty years, we have experienced an unrelenting assault on the standard of living and well being of the vast majority of Americans who work for a living. As a result, wealth and power are concentrated increasingly in the hands of a globalized elite. We would be hard-pressed to identify a period of U.S. history where the need for a labor-based political party was greater than it is now. After all of the events since the financial meltdown of 2008 - the "Wisconsin Winter," the "Occupy Wall Street Autumn," another "lesser of two evils" election season - the next logical step might seem to be the launching (or re-launching) of just such a party. Yet the short-term prospects of an independent, pro-worker political movement emerging on the American scene are virtually nonexistent.