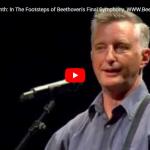 In late 2013, Bill featured a preview of the film Following the Ninth: In the Footsteps of Beethoven’s Final Symphony, a documentary exploring the worldwide cultural and political influence of Beethoven’s masterpiece and its majestic “Ode to Joy.”

As Bill said in that broadcast, “It’s about perhaps the greatest piece of music ever written, Beethoven’s Ninth Symphony, in which the composer took Friedrich Schiller’s poem ‘Ode to Joy,’ and transformed what essentially was a drinking song into what has been called a universal human anthem. Resolute in the face of his own deafness and failing health, Beethoven was able to express something immortal and sublime, so revealing of our deepest feelings, that we know it is saying for us what we cannot say on our own.”

The film follows the Ninth Symphony to cultures around the world, telling the story of its impact in countries at critical inflection points in history including Germany, China, Japan and Chile.

The film’s director, Kerry Candaele, gave us the opportunity to present you the full film.