‘Never in my country’: The COVID-19 Pandemic and US exceptionalism 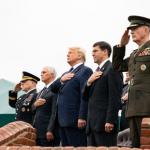 This March, as COVID-19’s capacity to overwhelm the American healthcare system was becoming obvious, experts marveled at the scenario unfolding before their eyes. “We have Third World countries who are better equipped than we are now in Seattle,” noted one healthcare professional, her words echoed just a few days later by a shocked doctor in New York who described “a third-world country type of scenario.” Donald Trump could similarly only grasp what was happening through the same comparison. “I have seen things that I’ve never seen before,” he said. “I mean I’ve seen them, but I’ve seen them on television and faraway lands, never in my country.”

At the same time, regardless of the fact that “Third World” terminology is outdated and confusing, Trump’s inept handling of the pandemic has itself elicited more than one “banana republic” analogy, reflecting already well-worn, bipartisan comparisons of Trump to a “third world dictator” (never mind that dictators and authoritarians have never been confined solely to lower income countries).

And yet, while such comparisons provoke predictably nativist outrage from the right, what is absent from any of these responses to the situation is a sense of reflection or humility about the “Third World” comparison itself. The doctor in New York who finds himself caught in a “third world” scenario and the political commentators outraged when Trump behaves “like a third world dictator” uniformly express themselves in terms of incredulous wonderment. One never hears the potential second half of this comparison: “I am now experiencing what it is like to live in a country that resembles the kind of nation upon whom the United States regularly imposes broken economies and corrupt leaders.”

Because behind today’s coronavirus-inspired astonishment at conditions in developing or lower income countries, and Trump’s authoritarian-like thuggery, lies an actual military and political hegemon with an actual impact on the world; particularly on what was once called the “Third World.”

In physical terms, the U.S.’s military hegemony is comprised of 800 bases in over 70 nations – more bases than any other nation or empire in history. The U.S. maintains drone bases, listening posts, “black sites,” aircraft carriers, a massive nuclear stockpile, and military personnel working in approximately 160 countries. This is a globe-spanning military and security apparatus organized into regional commands that resemble the “proconsuls of the Roman empire and the governors-general of the British.” In other words, this apparatus is built not for deterrence, but for primacy.

The U.S.’s global primacy emerged from the wreckage of World War II when the United States stepped into the shoes vacated by European empires. Throughout the Cold War, and in the name of supporting “free peoples,” the sprawling American security apparatus helped ensure that 300 years of imperial resource extraction and wealth distribution – from what was then called the Third World to the First – remained undisturbed, despite decolonization.

Since then, the United States has overthrown or attempted to overthrow the governments of approximately 50 countries, many of which (e.g. Iran, Guatemala, the Congo, and Chile) had elected leaders willing to nationalize their natural resources and industries. Often these interventions took the form of covert operations. Less frequently, the United States went to war to achieve these same ends (e.g. Korea, Vietnam, and Iraq).

In fiscal terms, maintaining American hegemony requires spending more on “defense” than the next seven largest countries combined. Our nearly $1 trillion security budget now amounts to about 15 percent of the federal budget and over half of all discretionary spending.  Moreover, the U.S. security budget continues to increase despite the Pentagon’s inability to pass a fiscal audit.

Trump’s claim that Obama had “hollowed out” defense spending was not only grossly untrue, it masked the consistency of the security budget’s metastasizing growth since the Vietnam War, regardless of who sits in the White House. At $738 billion dollars, Trump’s security budget was passed in December with the overwhelming support of House Democrats.

And yet, from the perspective of public discourse in this country, our globe-spanning, resource-draining military and security apparatus exists in an entirely parallel universe to the one most Americans experience on a daily level. Occasionally, we wake up to the idea of this parallel universe but only when the United States is involved in visible military actions. The rest of the time, Americans leave thinking about international politics – and the deaths, for instance, of 2.5 million Iraqis since 2003 – to the legions of policy analysts and Pentagon employees who largely accept American military primacy as an “article of faith,” as Professor of International Security and Strategy at the University of Birmingham Patrick Porter has said.

"Thus, despite its size, impact, and expense, the world’s military hegemon exists somewhere on the periphery of most Americans’ self-understanding, as though, like the sun, it can’t be looked upon directly for fear of blindness."

Foreign policy is routinely the last issue Americans consider when they vote for presidents even though the president has more discretionary power over foreign policy than any other area of American politics. Thus, despite its size, impact, and expense, the world’s military hegemon exists somewhere on the periphery of most Americans’ self-understanding, as though, like the sun, it can’t be looked upon directly for fear of blindness.

Why is our avoidance of the U.S.’s weighty impact on the world a problem in the midst of the coronavirus pandemic? Most obviously, the fact that our massive security budget has gone so long without being widely questioned means that one of the soundest courses of action for the U.S. during this crisis remains resolutely out of sight.

The shock of discovering that our healthcare system is so quickly overwhelmed should automatically trigger broader conversations about spending priorities that entail deep and sustained cuts in an engorged security budget whose sole purpose is the maintenance of primacy. And yet, not only has this not happened, $10.5 billion of the coronavirus aid package has been earmarked for the Pentagon, with $2.4 billion of that channeled to the “defense industrial base.” Of the $500 billion aimed at corporate America, $17.5 billion is set aside “for businesses critical to maintaining national security” such as aerospace.

To make matters worse, our blindness to this bloated security complex makes it frighteningly easy for champions of American primacy to sound the alarm when they even suspect a dip in funding might be forthcoming. Indeed, before most of us had even glanced at the details of the coronavirus bill, foreign policy hawks were already issuing dark predictions about the impact of still-imaginary cuts in the security budget on the U.S.’s “ability to strike any target on the planet in response to hostile actions by any actor” – as if that ability already did not exist many times over.

On a more existential level, a country that is collectively engaged in unseeing its own global power cannot help but fail to make connections between that power and domestic politics, particularly when a little of the outside world seeps in. For instance, because most Americans are unaware of their government’s sponsorship of fundamentalist Islamic groups in the Middle East throughout the Cold War, 9/11 can only ever appear to have come from nowhere, or because Muslims hate our way of life.

This “how did we get here?” attitude replicates itself at every level of political life making it profoundly difficult for Americans to see the impact of their nation on the rest of the world, and the blowback from that impact on the United States itself. Right now, the outsized influence of American foreign policy is already encouraging the spread of coronavirus itself as U.S. imposed sanctions on Iran severely hamper that country’s ability to respond to the virus at home and virtually guarantee its spreadthroughout the region.

Likewise, it is more than karmic comeuppance that the President of the United States now resembles the self-serving authoritarians the U.S. forced on so many formerly colonized nations. The modes of militarized policing American security experts exported to those authoritarian regimes also contributed, on a policy level, to both the rise of militarized policing in American cities and the rise of mass incarceration in the 1980s and 90s. Both of these phenomena played a significant role in radicalizing Trump’s white nationalist base and decreasing their tolerance for democracy.

Most importantly, because the U.S. is blind to its power abroad, it cannot help but turn that blindness on itself. This means that even during a pandemic when America’s exceptionalism – our lack of national healthcare – has profoundly negative consequences on the population, the idea of looking to the rest of the world for solutions remains unthinkable.

Senator Bernie Sanders’ reasonable suggestion that the U.S., like Denmark, should nationalize its healthcare system is dismissed as the fanciful pipe dream of an aging socialist rather than an obvious solution to a human problem embraced by nearly every other nation in the world.  The Seattle healthcare professional who expressed shock that even “Third World countries” are “better equipped” than we are to confront COVID-19 betrays a stunning ignorance of the diversity of healthcare systems within developing countries. Cuba, for instance, has responded to this crisis with an efficiency and humanity that puts the U.S. to shame.

Indeed, the U.S. is only beginning to feel the full impact of COVID-19’s explosive confrontation with our exceptionalism: if the unemployment rate really does reach 32 percent, as has been predicted, millions of people will not only lose their jobs but their health insurance as well. In the middle of a pandemic.

Over 150 years apart, political commentators Edmund Burke and Aimé Césaire referred to this blindness as the byproduct of imperialism. Both used the exact same language to describe it; as a “gangrene” that “poisons” the colonizing body politic. From their different historical perspectives, Burke and Césaire observed how colonization boomerangs back on colonial society itself, causing irreversible damage to nations that consider themselves humane and enlightened, drawing them deeper into denial and self-delusion.

Perhaps right now there is a chance that COVID-19 – an actual, not metaphorical contagion – can have the opposite effect on the U.S. by opening our eyes to the things that go unseen. Perhaps the shock of recognizing the U.S. itself is less developed than our imagined “Third World” might prompt Americans to tear our eyes away from ourselves and look toward the actual world outside our borders for examples of the kinds of political, economic, and social solidarity necessary to fight the spread of Coronavirus. And perhaps moving beyond shock and incredulity to genuine recognition and empathy with people whose economies and democracies have been decimated by American hegemony might begin the process of reckoning with the costs of that hegemony, not just in “faraway lands” but at home. In our country.

[Jeanne Morefield is a Non-Resident Fellow at the Quincy Institute and a Senior Lecturer in the Department of Political Science and International Studies at the University of Birmingham in England. She is the author of Empires Without Imperialism: Anglo American Decline and the Politic of Deflection (2014) and Covenants Without Swords: Idealist Liberalism and the Spirit of Empire (2005), and Empire as Method: Edward Said and Political Theory (forthcoming).]