The U.S. Labor Movement during the COVID-19 Pandemic 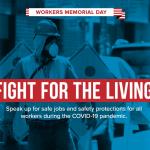 Well over a month into an unprecedented U.S. corona pandemic lockdown era, unions, worker centers and other organized groups of workers have been key vehicles to improve health and safety on the job, get critical PPE, increase essential worker “hazard” pay, obtain paid leave, shut down unsafe worksites, and address other related issues.

With nearly one million U.S. COVID-19 cases and more than 50,000 deathsso far, it’s likely that many workers are contracting the coronavirus at work. Thousands of New York City transit workers have gotten sick and 83 have died. There are corona hotspots at many meatpacking plants. Grocery workers are working in crowded stores. Health care workers don’t have the PPE they need. Farmworkers are particularly vulnerable. Workers Memorial Day is tomorrow, and this pandemic reminds us that workplaces have never been safe enough.

There’s been great reporting on labor struggles in Labor Notes, Organizing Work, PayDay Report, In These Times and other outlets. Let’s take a look at what’s happening around the labor movement. This is necessarily a brief overview, which will focus on workplace actions and not political lobbying.

Unions have been demanding and negotiating for safer working conditions, paid leave, extra pay and a range of other measures. The study will have to be done when the crisis is over that will likely show that union workers overall were safer during the pandemic. Several manufacturing unions have also called for their factories to make PPE and ventilators.

PayDay Report currently has a map of over 100 worker strikes, walkouts, sickouts and other protests over COVID-19 issues across many sectors — retail, fast food, food processing, warehousing, manufacturing, public sector, health care, gig economy and more. Detroit autoworkers walked outafter several coworkers contracted corona, closing the plant. Pittsburgh sanitation workers stopped work over safety concerns. Birmingham transit workers refused to work, leading to safety improvements on their buses. Particularly important are the actions at Amazon, a huge and powerful employer at the center of the economy, which has had corona cases at over 100 warehouses. Workers at a number of employers have called for a general strike of essential workers on May Day.

Other actions include worker petitions at numerous companies. Coworker.org has a page dedicated to COVID-19 campaigns, which currently has over 180 petitions running. Action Network and Change.org are other petition platforms.

An interesting project that has developed is the Democratic Socialists of America/United Electrical workers union Emergency Workplace Organizing Committee (EWOC), which I have been involved with. EWOC has a network of hundreds of organizers responding to requests coming in every day from workers around the country who want help with organizing in their workplace. Organizers see efforts like this as not only helping workers improve working conditions now, but teaching organizing skills to a larger group of non-union workers, who can spread these skills and may want to organize more formal unions later on.

There has also been a number of online calls and trainings on dealing with this crisis. Organize 2.0 recently held a conference on online organizing campaigns and Labor Notes had a virtual conference on organizing strategies around COVID-19. Jobs with Justice and the Labor Research & Action Network will hold their rescheduled joint 2020 conference online next month.

A number of worker solidarity funds have been established by Jobs with Justice and many other groups. Bernie Sanders has also used his recent presidential campaign to help fundraise for a number of funds.

The workforce is now divided into those able to work from home, the essential workers who have to report to work, and the now over 26 million newly unemployed workers. The National Employment Law Project and the Economic Policy Institute have research and resources about the major employment impacts of the crisis.

There have been some disappointing labor responses as well. A bizarre op-ed by four union presidents praised some unionized companies for treating workers better than non-union ones, stating “unions are eager to work with companies who are stepping up to face the new reality.” This call for labor-management partnership has been criticized as a class snuggle approach, that doesn’t acknowledge that the presence and pressure from unions was the only reason these companies didn’t behave worse. The crisis has exposed the brutality of American capitalism and workers must organize to save themselves.

Indeed, while the coronavirus has brought new and urgent issues for organizing, employers continue to engage in union-busting during this crisis, using the pandemic as a pretext, and a few public sector employers are suspending union contracts. These are all actions that will make workers less safe. A new National COSH report lists a number of bad employers regarding COVID-19.

As states move to “reopen” the economy, we may see a new wave of labor unrest as more employers force workers into potentially unsafe situations without proper PPE or workplace safeguards. Meanwhile OSHA is taking a largely hands-off approach and employers are lobbying to be shielded from legal liability for workplace corona cases. Moreover, workers who are called back to work but are fearful of returning may no longer be able to claimunemployment benefits. And if the pandemic death toll spikes again, let’s remember the right-wing groups that were protesting for the right to get haircuts.

Hopefully the coronavirus recedes soon, but we may be in an economic crisis that lasts for years. It will be essential to have a full accounting of all the labor movement strikes, protests and negotiations that made things safer for workers during this time. This kind of tracking is critical since it’s unlikely that these actions will make it into the official government work stoppage data. Moreover, a crisis such as this often radicalizes people who are looking for answers and offers new opportunities to organize workers and make big changes in society. Just as with the Great Depression nearly a century ago, we may be at the beginning of a new era of class struggle that could remake the labor movement and the world.