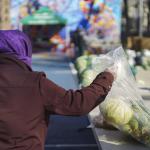 In early March, as the first wave of Americans succumbed to Covid-19, states and towns shuttered schools and sent college students packing, closed bars and cafes, and forced restaurants to transition to delivery or take-out-only operations. The effects on the agriculture sector were immediate and severe. With no outlets for their perishable products, farmers who normally supply such institutional kitchens dumped milk, plowed under fields, and wondered if their operations would last another season.

Meanwhile, parallel reports emerged about food banks, soup kitchens, and senior meal programs hurting for donations. Seeing huge quantities of food destroyed while people went hungry—echoing a Grapes of Wrath passage where malnourished children are forbidden from collecting rotting oranges—prompted public outcry. Why couldn’t this food be diverted to where it was needed?

There are multiple answers, including: Some of it is; it’s just taking a while. To get a clearer understanding of where institutional food comes from, why kinks at the center of the supply chain make rerouting a challenge, and what’s being done to change that, I talked to a variety of agriculture experts.

Responses have been lightly edited for length and clarity.

Why is food being dumped?

Casella: The majority of producers in Florida and California grow a large volume of fruit and vegetables for the food-service industry. With those states’ peak harvests beginning as the pandemic started, the food distribution system did not have time to absorb the excess volume.

Terry: Areas where you see eye-popping pictures of massive waste are from operations that are bigger than they should be. Everything is predicated on a supply chain with few fluctuations, but anybody who grew up on a farm knows that agriculture doesn’t work that way. Even in Fayetteville, though, we had local producers who were growing for the school and the restaurant systems and  when the marketplace shut down, there was a surge of produce and farmers were like, holy crap, what to we do?

Areas where you see eye-popping pictures of massive waste are from operations that are bigger than they should be.

Bolting, a.k.a. going to seed, happens when plants grow past their prime before they can be harvested

Sippola: Sixty percent of our business is the 350 pounds a week of lettuce mix and baby romaine we produce for four school districts. They were our only wholesale customers and in the first weeks they were shut down, we had 4,500 heads of romaine that bolted that we had to mow down.

Barber: The food waste we’re seeing has everything to do with the inability of large-scale vegetable farms that service institutions to pivot to service other markets. It’s not just about hopping on a different truck, it’s about how [that food] is packed and manicured.

Who’s responsible for that “packing and manicuring”?

Barber: Middlemen. I’ve talked about ignoring middlemen because they tend to degrade food, whether it’s a mill taking whole wheat and making it into white flour, or a processing center deadening vegetables by co-packing, freezing, canning. But if we reimagine a regional food economy where that middleman is key, if during a crisis excess vegetables could go to a fermenter or pickler, that’s resiliency.

Stephens: Emergency meals being prepared during this crisis focus on prepared foods—they’re easier for families to take home. But if you if had a local producer who could package snap peas into individual grab-and-go containers, schools could purchase those high quality food items, and also address distribution challenges for farmers. Additionally, some milk goes to K-12 schools in bulk, but grab-and-go meals require small cartons; the missing link is flexibility in packaging.

The food waste we’re seeing has everything to do with the inability of large-scale vegetable farms that service institutions to pivot to service other markets.

Terry: Our school district is doing five days’ worth of breakfasts and lunches that families can pick up. This allows us to become an aggregator, although first we had to push out what we had in stock into the charitable food network; that prevents food waste, but it won’t keep farmers or farm workers employed. Now districts are partnering with farmers and using cafeteria staff to sub-divide bulk deliveries into individual components.

Feenstra: Small and mid-scale growers are more adept at changing their business and distribution models to meet the needs of their communities, and some farmers have found new outlets: selling partly to school districts, doing CSAs or direct deliveries, and working with food banks. On the flip side, one restaurateur in Sacramento is buying from local farmers and putting his staff to work cooking good quality food instead of just canned things for the emergency food system.

Stephens: For emergency meals, what’s working best is hand fruits [like apples, pears, peaches], and cherry tomatoes that don’t take a lot of preparation and, unlike leafy greens, can sit in a cooler. The Austin school district has been able to make some beef purchases and freeze the stock for summer feeding, which helps farmers. Food banks have incredibly high demand for fresh food but the barrier is storage; in some cases they’ve found a university nearby with storage space they can borrow.

Small and mid-scale growers are more adept at changing their business and distribution models to meet the needs of their communities.

Sippola: We started to do grab-and-go retail boxes through our online store and they’ve been wildly successful; we’re selling 100 boxes a week and we’ve sourced extra items from a farmer friend to fill them. We put a large amount of lettuce in those but we can also sell bagged lettuce to boutique groceries. What saved us is personal relationships. We sell Natomas Unified school district lettuce in bulk and they put it in cups for taco salads for their grab-and-go [emergency] meals; it’s real food, with corn and black beans and dressing and a protein, not just prepackaged granola bars. They know it’s a big deal and want to help us.

Who else is helping make this new reality work for farmers and feeders?

Stephens: Agencies like West Virginia’s education department have been important connectors between producers and feeding programs, and state agriculture departments play an important role in identifying alternative markets for producers, as well as promoting them to the public. Localized nonprofits like Common Market in New York City can serve as regional distributors, connecting local farmers to feeding programs and helping them package their products.

Edwards-Orr: Some colleges, like Smith, are using their [kitchens] and pantry inventories to prepare meals for food banks or Meals on Wheels. Hospitals continue to serve healthcare workers but have radically reduced the number of meals served. University of Vermont Hospital, for example, has turned its cafeteria into food retail for healthcare workers who are unable to safely shop due to virus exposure.

Food banks have incredibly high demand for fresh food but the barrier is storage.

Feenstra: In California, some new food hubs are starting up to make the connection between small- and mid-scale famers with excess, and consumers who use CalFresh/SNAP. There’s also work being done to figure out how to change CSAs to direct delivery or drop-off. Who is making these connections are co-op extension service agents, in every county in the U.S. They can share resources and research, and have access to grant monies. One agent told me she worked with county board supervisors to keep farmers’ markets open, then with market managers to reorganize to keep the markets safe.

How are farmers preparing for the months ahead?

Casella: New Jersey growers are forced to make decisions on what to plant and how many acres to produce for harvest this summer. As the season slowly starts with greens, progresses to asparagus and strawberries, then into cucumbers and summer squash, farmers are concerned if supply and demand will align. Some think we need to expect a continuing loss of demand from the food-service industry but it is hard to predict how it will affect the wholesale market.

This crisis has revealed the extreme silo-ing of our supply chains.

Sippola: We’re completely changing our crop plan. I think school districts are going to order in the fall but it won’t be the same. We only usually grow school crops nine months of the year; this year that’s not possible. So we had to hurry up and order seeds for summer crops that we don’t have a market for at the most competitive time of year for farmers. We’re crossing fingers we’re going to find markets, then hustle to find bigger groceries. We’re also opening a whole other acre so we can accommodate more grab-and-go retail boxes.

What flaws has this crisis revealed? What do you hope will change?

Edwards-Orr: This crisis has revealed the extreme silo-ing of our supply chains. From a grower that grows lettuce to the specifications of a chain restaurant, to a distributor who specializes in serving them, it is very difficult to pivot the entire supply chain to a grocery store. This is due to a combination of specialized hard infrastructure [harvesting, packing, packaging] and customized soft infrastructure [relationships, industry knowledge, customer service]. And for an industry that has trained customers to expect non-variable access to food 12 months a year, it is doubly hard to innovate.

Terry: Food wasted when there are high levels of food insecurity in communities is an equity issue. SNAP participants cannot purchase food online unless their state is part of a USDA pilot program. Two mega-vendors are leading the pilot but this leaves out farmers’ markets and CSAs and co-ops and small vendors and indie grocers and individual food systems. But we already have a whole separate process called Marketlink, which allows direct farm sales, and I’d like to lay that process on top of online SNAP pilots to get an integrated system.

Stephens: We know there will be shocks to the system from climate change and future pandemics and we need to be ready to adapt. We hold true to our core [philosophy] that focusing on localizing regional food systems can create flexibility in these times. I hope institutions will recognize that the need for producers to have markets, and for people to have access to healthy food, is always going to be there. How can we strengthen intersections in the middle to ensure that can happen?