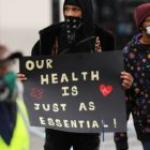 Last week began with Workers’ Memorial Day and ended with International Workers’ Day or May Day, an appropriate bookend in the era of COVID-19. Frontline and essential workers are simultaneously lauded as heroes and face workplaces where the employer has seemingly abandoned care for their safety and their lives; aided by the federal Government’s loosening of workplace protections. As the virus spreads, workers describe feeling as if, “this is closing in on us”.

One Amazon Fulfillment Center employee who Workday spoke with last week, argues that the rush to hire more Amazon employees to meet fulfillment needs has been done without considering training and safety. Like  most workers nationally, essential workers have to weigh risking their health to return to work or lose unemployment benefits.

Worse still, a flood of new employees during the greatest unemployment crisis since the Great Depression means that it is much easier for Amazon managers to arbitrarily fire workers, rendering warehouse workers more disposable than ever.

What Amazon has done is created a system that is entirely contingent on squeezing every ounce of human energy, making the most of an efficient exploitation. Something akin to the dangerous line speeds in meatpacking plants coupled with the cold efficiency of Fordian automation.

Amazon has designed the most effective exploitation system along every node of the supply chain. They have been able to reduce human workers to data points to track their every movement, with limited regard for their safety. Nevertheless, these disposable workers are asserting their dignity with the only means available to them.

An unprecedented coalition of workers from Amazon, Instacart, Whole Foods, Walmart, Target, and FedEx walked out on May Day,, citing what they say is their employers’ record profits at the expense of workers’ health and safety during the coronavirus pandemic.

“We are acting in conjunction with workers at Amazon, Target, Instacart and other companies for International Workers’ Day to show solidarity with other essential workers in our struggle for better protections and benefits in the pandemic,” said Daniel Steinbrook, a Whole Foods employee and strike organizer.

The May 1 strike was the latest in a wave of actions led by frustrated and mistreated union and nonunion front-line workers. Despite trillions of dollars made available by Congress, unemployment continues to increase, creating the conditions necessary for broader agitation and the achievement of a world that respects all workers.

Frontline workers in the service sector remain forgotten and treated as disposable. When a co-worker becomes ill there is no ability to test or become aware if they are exposed as the employer restricts access to information. Sick essential workers are stretching themselves thin, working despite feeling ill or knowing they are or have been exposed to the virus.

Reports from every sector of the economy indicate that not only is there a lack of protective equipment but almost no testing at large workplaces until a crisis emerges.

COVID-19 is affecting Black, Latinx, and Indigenous people at far higher rates than any other group. Health disparities, access to health care, insurance, and the inability to work from home are a few of the factors causing this gap.

Henry Scott worked in concessions at US Bank Stadium along with other odd jobs. He mentioned that navigating the unemployment system is difficult since he doesn’t have a laptop and is used to talking to people by phone. Like other workers of color, for Scott life was already hard before the pandemic, and things are getting a lot worse.

The threads of structural racism are tightening. Even if the economy can open up soon, the sort of work that people like Henry Scott does will take a while to get going. He is worried about getting sick and exposing his family and the cost of care saying, “who needs medical bills on top of the other bills.”

Scott noted that Black folks are becoming infected at higher rates than the rest of the population. He is also aware that the higher incidences of asthma in North Minneapolis due to the toxins spewing from Northern Metals. In his community, this creates an unavoidable underlying condition that can result in complications from the virus.

On Wednesday at a video press conference with SEIU 26, we learned that Armando Solis died at age 55 from COVID-19. Solis worked as a custodial worker for 10 years in the US Bank Plaza in downtown Minneapolis and was on the SEIU’s bargaining committee. He left behind a wife and two adult sons.

As of the press conference, 10 SEIU members tested positive for COVID-19 or have symptoms. That includes Jessica Romero, a janitor at Medtronic, who was supposed to speak at the press conference but was admitted to the hospital earlier Wednesday. All the adults in Romero’s household have been infected including her husband and grandma.

Most workers with SEIU Local 26 are people of color and immigrants, who are bearing the brunt of COVID-19’s health and economic wreckage. 10-15% of its members have been laid off because of COVID-19, while the rest continue to perform their duties as essential workers.

“My company is not offering hazard pay that others have. We have to work to pay rent and food. But we are afraid of heading out. We have family that when we leave we want them safe. Every day and every night we confront danger, and we feel as though we don’t have a choice. My daughter has asthma and I am afraid of carrying the virus and infecting her.”

Olemare Mercado works at ABM-Cargill. Mercado has observed that she along with her co-workers  “go to work afraid that they will get infected because they don’t have the necessary gear. No hazard pay. People have tested positive and one person has died. We are afraid for ourselves and our family. We want to know if someone tests positive because we can’t persist with this fear and concern. Not just cleaning but security as well, we are human beings and we deserve the right to be safe in the workplace.”

Meatpacking plants dotted all over the upper Midwest such as the Smithfield pork plant in Sioux Falls, South Dakota, Worthington Minnesota and others along the meat supply chain have been the sites of some of the worst coronavirus outbreaks in the country. Despite this crisis President Trump has ordered these plants to stay open.

As labor journalist Steven Greenhouse wrote, “In ordering the nation’s meat plants to stay open, Donald Trump is in essence marching many meatpacking workers off to slaughter.”

“The COVID-19 pandemic has demonstrated, more clearly than ever, that worker health cannot be separated from public health,” Marcy Goldstein-Gelb, co-executive director of COSH, said in a press release. “Life-threatening hazards don’t stay put in a single building or worksite, but spread to family members, neighbors, and the public at large. Every worker is essential to their family—and deserves to come home safely at the end of their shift.”

States are beginning the process of relaxing social distancing guidelines. The pacing and timing of reopening economies is a sensitive matter further complicated by the Trump administration’s efforts to reopen the country for business amid the coronavirus outbreak against the cautions brought forward by scientists.

In many states, workers without a valid excuse for not returning to work when called back will lose their unemployment benefits. In Ohio the Department of Job and Family Services set up a website for employers to report workers who refuse to come to work and emailed companies about it Friday.

Left unsaid is that if the economy opens too soon, workers that have been doing essential work also run the risk of potentially infecting the clusters of workers that are coming back to the workplace.

Filiberto Nolasco Gomez is a former union organizer and is now the editor of Minneapolis based Workday Minnesota, the first online labor news publication in the state. Filiberto focuses on longform and investigative journalism. He has covered topics including prison labor, labor trafficking, and union fights in the Twin Cities.