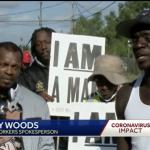 The workers, who make only $10.25 an hour are also demanding hazard pay and paid sick leave.

After striking, the workers were fired en-masse earlier this week

However, many workers had hoped that the city would find a resolution to hire the back. Now, the city has found new workers to replace the striking workers, prison labor from nearby Livingston Parish.

“Metro Services Group has long been an advocate of helping persons who had been incarcerated return to society in a meaningful and productive way,” said the city’s sanitation services in a statement. “Metro makes no apologies for this policy as a core element of our commitment to being good corporate citizens.

Under state rules, prison inmates, employed by Metro Services, will be paid only 13% of what garbage workers, who only make $10.25-an-hour, are being paid.

“I really don’t like it,” says Woods. “They are really trying to use those dudes to do our job, and they paying them way less than they were paying us.”

“They are trying to show the world that people will still do our job without giving us the proper protective equipment,” says Woods. “All of it is a hustle for them, a scam for them. They saving money that’s all they are doing – that’s all it is”.

The workers have been on strike for four days, but so far, the city of New Orleans has refused to meet with them to discuss their safety concerns.

Despite the use of inmates, garbage workers say that they will continue to strike in New Orleans. They have built widespread community spreads from unions and community groups, but still, the city has refused to meet with them to discuss their safety concerns.

“They aren’t trying to hear us,” says Woods. “They don’t care about us; they would let anything happen. If we were to get sick, they don’t care if we spread the disease. They just don’t care”.