Kick the Boss Out of the Doctor's Office 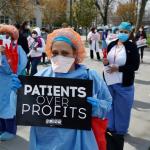 Is the ability to negotiate healthcare benefits with employers a source of strength for unions, or an insidious trap? The Covid-19 health crisis and ensuing economic meltdown probably answers that question, but it’s still worth dissecting for those naive optimists who think there is some semblance of the old normal that we can return to when the pandemic is finally behind us.

Medicare for All was a central issue in the Democratic presidential primary. Among the front-runners, Bernie Sanders and Elizabeth Warren endorsed versions of a single-payer plan, while Joe Biden argued against it. In doing so, Biden employed unions’ hard-fought campaigns to win and maintain health benefits to argue that taking the issue out of bargaining entirely, by providing healthcare to everyone, would be disrespectful to union members’ past sacrifices. The issue blew up in the Nevada caucuses when the powerful—and progressive—hotel and casino workers union, Culinary Local 226, warned members to be wary of candidates supporting Medicare for All, claiming it could spell the end of their admirable system of employer-sponsored healthcare clinics.

The messy truth is this: unions that have robust labor-management benefit funds enjoy a degree of power and privilege in our broken system, and can even use their health care plans to aid in organizing. But most unions negotiate with employers individually, and the rising cost of insurance premiums drags down wages and the ability to organize new shops. My experience as a union organizer and negotiator has convinced me that unions cannot grow until we kick the boss out of the doctor’s office.

I cut my teeth at the NY Hotel Trades Council (NYHTC), whose system of union-run healthcare clinics was the model and inspiration for Culinary Local 226. I appreciate the pride that union leaders take in providing health benefits for their members, and their reticence about making big changes. It was easily the best health care (as distinguished from mere insurance) that I’ve enjoyed in my life. It’s not just that co-pays were low and prescriptions were dirt cheap. The group practice aspect of its network of clinics—doctors, nurses and technicians actually consulting with each other about a patient’s symptoms and medical history and developing a holistic approach to diagnosis and treatment—is amazing. It’s what we want when we visit a doctor. We don’t get it under our current mess of private insurance. But the NYHTC has somehow managed to win and maintain just such a miniature form of socialized medicine for its community.

Unions only got into the business of healthcare when the government froze wages during World War II to fight inflation, but exempted “fringe” benefits. Many unions emerged from the war years with employer-sponsored health insurance. The social democratic CIO unions held out in hopes of a post-war expansion of healthcare as a universal right. After Republicans took control of Congress in 1946, CIO leaders vowed not to wait “for perhaps another ten years until the Social Security laws are amended adequately” and to use their collective bargaining power to address their members’ health and retirement security. Think about that. Our employer-sponsored healthcare system was a five-year deal to make progress on a ten-year problem, not to be our forever compromise.

In a fascinating contrast, the NYHTC was an AFL union with Communist leadership during the war. It bargained for employer-funded health insurance and quickly chafed against the costs and lack of control that Blue Cross afforded them. They bargained for employers to fund a jointly-managed network of health clinics. The NYHTC was able to organize its miniature system of socialized medicine because they were smart enough to take advantage of a political moment in time when employers wanted labor peace and were willing to pay for it. They’ve managed to hold on to it because they have maintained a very high level of union density and because the economics of the system works for the employers.

In fact, they managed to negotiate a deal with the city’s Hotel Association that says laid off members will continue to enjoy their health benefits while they are laid off due to hotels being shuttered as a result of Covid-19. But most other unions have had little to no ability to maintain health benefits for their laid-off members. Millions of workers are losing their access to healthcare along with their jobs in the middle of a global health pandemic.

Unions with benefit funds play an outsized role in the thinking about labor law reform because of their relative size and political clout. There are some who propose technocratic solutions for union growth, by having unions take on the administrative burdens of benefit administration and offering economies of scale to entice employers into a bargaining relationship. But there are two primary problems with this approach.

First of all, it requires organizing from a position of strength, and there are not many places where labor is institutionally strong. In recent years, the NYHTC has begun to organize workers outside of the five boroughs of New York City. The fact that unionized hotels that pay into the benefit fund wind up spending less money on better healthcare has been helpful. That’s great for hotel workers in New Jersey and upstate New York. But what the hell do we do about grocery store workers in Arizona, or adjunct professors in Texas?

The second problem is that operating a benefit fund requires willing employers, and employers are mostly not willing. They’re not eager to have unions in the workplace and they’re not willing to engage in collective problem solving with their competitors. Employers spent the last 40 years breaking out of multi-employer bargaining everywhere that they could. Most employers put the high cost of health insurance on the bargaining table on day one. Before they can even try to make any gains, unions are already fighting concessions around health insurance.

The Culinary union’s skepticism of Democratic promises was understandable. Unions knocked on their members’ doors in 2008 warning that John McCain wanted to tax their health insurance only to watch Obama and Biden do the same. The irony is that Bernie Sanders’ plan—which now looks eminently moderate and affordable in the context of multi-trillion-dollar economic stimulus packages—would have explicitly protected and encouraged labor-management plans like Culinary’s. His proposed version of Medicare for All would simply alter who pays for the health clinics, not who hires the medical staff—or who the patients are. And Congress can still pass it.

In fact, moving to a single-payer system could enable more unions to win excellent healthcare through group practice clinics for their members—an essential next step after winning universal access to care.

Portions of this article were adapted from Tell The Bosses We're Coming: A New Action Plan for Workers in the Twenty-First Century (Monthly Review Press).

Shaun Richman is an In These Times contributing writer and the Program Director of the Harry Van Arsdale Jr. School of Labor Studies at SUNY Empire State College. His new book, Tell the Bosses We're Coming: A New Action Plan for Workers in the Twenty-First Century, is out now from Monthly Review Press. His Twitter handle is @Ess_Dog.