It was an easy choice. The two city-owned golf courses were already losing money before the pandemic, so Mayor Nan Whaley of Dayton, Ohio, closed them earlier this month to pare back expenses.

But the move is costing some workers their jobs. And tougher decisions lie ahead.

Mayor Whaley is weighing cuts of up to 18% for the city budget in the next fiscal year. She has already had to furlough 25% of the city’s workforce, as she struggles to maintain vital services in a city where the median household income, at $31,000, is about half the national average.

Dayton’s challenge, though particularly acute, echoes in cities and states nationwide as they see their local economies contract because of the pandemic-led downturn and rising unemployment. The upshot: At a time when the federal government is showering money on individuals and businesses, many states and cities will have to dig into rainy day funds, and cut back services and perhaps school budgets. And because they are obligated to balance their budgets, they will initiate a new wave of job losses – this time for public-sector employees.

How severe the cuts and layoffs will be will depend on the speed of the economic rebound and the size of federal aid. The House has passed and senators have introduced measures to speed aid to cities and states. Many economists across the political spectrum expect a slow rebound.

“The rapid drain on state and local revenues is generally unprecedented,” says Brian Riedl, a fiscal policy expert at the conservative Manhattan Institute. “It’s almost guaranteed that states and cities are going to need another round of assistance.” 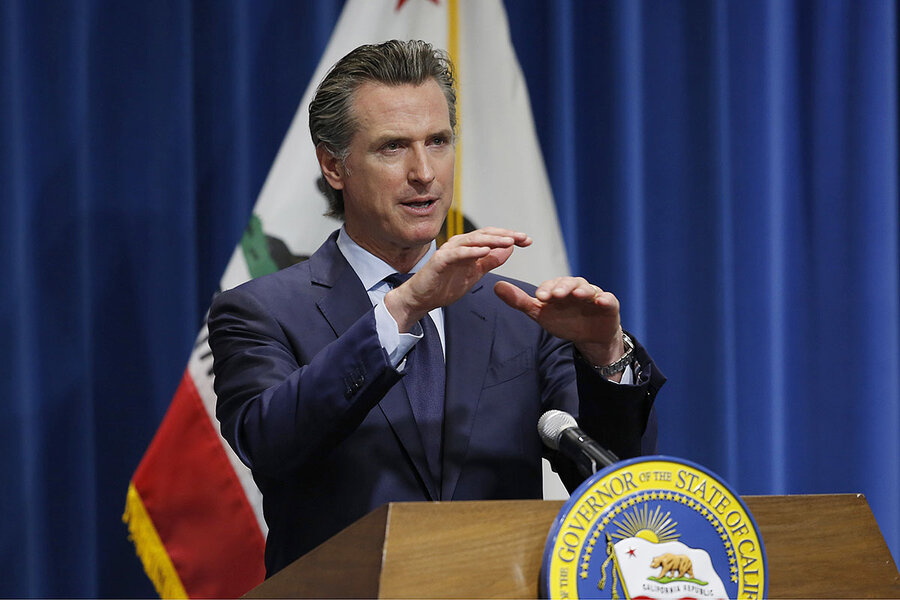 California Gov. Gavin Newsom discusses his revised 2020-2021 state budget during a news conference in Sacramento May 14, 2020. His proposal includes a 10% pay cut for state workers.

States are already cutting back:

Michigan and Oregon are among the early states to furlough thousands of workers. State employees have to take extra days off unpaid to save the state money.

Many other states face a double whammy: a plunge in general sales and income taxes, but also revenues from battered mainstay industries like oil (for Louisiana), investment banking (New York), or tourism (Hawaii, Nevada, and Florida).

Ohio is on the leading edge of the problem. Republican Gov. Mike DeWine is asking state agencies to plan for budget cuts of 20%. Ohio cities and towns are also feeling the pinch.

“The path forward without federal or state assistance is a very ugly path, and will be experienced broadly and deeply by the citizens of Dayton,” says Dayton City Manager Shelley Dickstein.

Honeymoon and new house? Not now.

Cincinnati and Columbus are among the places furloughing workers. So is Cleveland and the rest of Cuyahoga County.

That’s made many government workers nervous.

“I want to be cautious because I don’t know how extensive this will be,” says a furloughed Health and Human Services worker in Cuyahoga County, who asked not to be named due to concern about his job. He’d planned this year to have a wedding, a honeymoon in St. Thomas, and a new house – dreams now on hold. “Most of us are just grateful that we have a job,” he says.

Nationally, nearly 1 million state and local employees lost their work in April alone, out of a total 20 million such workers (13% of U.S. payroll employment as of January). The squeeze on the public sector can also dim the overall economy.

“State and local governments buy office supplies, and cars and trucks ... from the private sector,” says Elizabeth McNichol, a senior fellow at the Center on Budget and Policy Priorities, a research group on the political left. “They give assistance to people who spend money in their local communities.”

She says a top priority for Congress, alongside general aid to states and cities, should be funds targeted to ensure that Medicaid for the poor doesn’t run short. The CARES Act, passed by Congress in April, devoted $139 billion toward helping state and local governments, plus $11 billion to help U.S. territories, tribal governments, and the District of Columbia.

But those funds are largely intended to cover expenses directly related to the coronavirus outbreak. So places like Cuyahoga County, which qualified alongside states for a chunk of that federal aid, see fiscal gaps going unfilled.

Then there are small cities like South Haven, Michigan.

Even if a new round of federal relief targets localities with populations as small as 50,000 (the threshold for CARES Act eligibility was 500,000 residents), South Haven wouldn’t qualify. The lake-front community has barely 4,000 people and was already dealing with added budget pressures due to flooding caused by abnormally high water levels on Lake Michigan.

“We started building the budget in January with the assumption of having to invest between $500,000 and $1.5 million to combat the high water,” says Brian Dissette, South Haven city manager. “No one envisioned the COVID-19 situation or the potential for a recession.”

Amid all the uncertainty, he says, “we have told city council to expect amendments [to the proposed $46 million budget] throughout the year.” Budget cuts totaling $600,000 have already been made, including staff reductions.

Not far from South Haven, Heidi Keister of Paw Paw, Michigan, is working limited hours as a legal secretary in the Van Buren County prosecutor’s office. Even as her hours have been cut, she is still drawing a full salary, which is very welcome to Ms. Keister’s family. Two family businesses – a coffee shop and a concrete business – have been shuttered amid a state closure of all nonessential businesses.

“This is really a good time to regroup and rethink life,” Ms. Keister says, adding that she now has more time with a 3-year-old granddaughter who is awaiting a medical operation. “People need to find the positive in all this. ... What’s more important in life? Is a job so important that it’s taking you away from your family? No, it isn’t.”

Some 250 miles away near Cleveland, the sidelined county employee takes solace in facing a furlough rather than outright severance from his job.

“It’s definitely unfortunate that we are furloughed. I definitely wish that we weren’t,” he says. “But there’s so many people in worse situations than I am in. I'm just trying to move forward the best I can.”