Black America: Beyond 1968 This Time 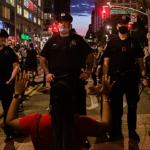 For four hundred years it’s been the American Way.

The pattern is the same. Racialize. Repress. Repeat.

It has recurred thousands and thousands of times since 1619. On plantations and in factories, in rural hamlets and big cities, in schools and business offices, parks, highways and city streets.

A CHANGE IS GONNA COME

The current uprising has galvanized a front against racism that is wider and deeper than ever before. The defenders of white supremacy are divided and anxiety-ridden, with hardly a tool left other than naked force – a sign of their political weakness. If the energy now evident in the streets can be organized, focused, and sustained, this upsurge can make post-pandemic, post-uprising, and post-Trump America a radically different place.

We have the experience and gains of previous upheavals against white supremacy to build on.  The arc from abolitionism through the Civil War to Reconstruction ended chattel slavery and gave us the landmark 13th, 14th and 15th Amendments. The Reconstruction-era state governments in the South were the most progressive yet seen in these Dis-United States, so infused with working class democracy that W.E.B. DuBois termed them a dictatorship of the proletariat.

Reconstruction was overturned by the combination of white racist terrorism and denial of the franchise to African Americans. The Jim Crow system was set in place.

Eighty years later a new cycle burst forth from Montgomery, Alabama. Powered by a decade of mass action, the Civil Rights Movement forced an end to Jim Crow.  In its post-1965 Black Power/urban uprising phase, the Black Freedom Movement added imperial war and economic inequality to its prime target list.

In the two-decade arc of this Second Reconstruction, the African American insurgency opened space for the birth or revitalization of movements of all other oppressed constituencies. It was central to ending racist immigration quotas, initiating Medicare, and providing the anti-Vietnam War Movement with a heavyweight power punch.

On the night of Martin Luther King’s assassination April 4, 1968 Black rebellions erupted in more than 100 cities. Flames came within six blocks of the White House; 70,000 troops were called out to “restore order.”

Tuesday, there were uprisings in 140 cities. President Trump threatened to deploy the military. Trump’s top henchman, Attorney General William Barr, ordered the teargassing of peaceful protesters near the White House so Trump could pose for a photo-op holding a Bible.

The pattern repeats, but several important things are different this time around.

The millions who poured into the streets in the 1960s gave the powers-that-were-then a damn good scare. More than a few of us believed a final reckoning was near at hand.

Our ruling class opponents were divided on many things, but every important faction saw the insurgents of 1968 – Black America first and foremost – as a serious threat to their system of rule. They were deeply worried about how much they would be forced to concede, and what political price they would pay here and around the world for the legalized murder they unleashed. But all sectors of the elite were confident that when the blood dried, an imperial behemoth still possessing unmatched economic muscle would prevail. Some unfortunate adjustments would have to be made in their profit-making racket, but the underlying structures they relied upon would stay mostly intact.

That is not the case today.

Ruling class unity and confidence has been badly shaken. Their neoliberal economic order system is in tatters, still unrecovered from the 2008 financial crisis and under fire from all quarters. Washington’s global power has been steadily slipping away. The government’s response to the COVID-19 pandemic has made the U.S. a global laughingstock, while casting a spotlight on this country’s deep-rooted inequities. The current uprising has moved the country’s longstanding racial fault line center stage and is generating a new cohort of revolutionary fighters.

The result is a crisis holding greater danger but also greater possibility than the high tide of 1968. The danger lies in the potential imposition of a racist authoritarian state. The possibility that exists is setting out on the path toward a Third Reconstruction that will remake the country.

THE COUNTRY HAS CHANGED

Generational politics are also working against defenders of the status quo. Millennials (born 1981 to 1996) and Gen Xers (born 1997 and after) are markedly to the left of older generations.  Half of white Millennials say racial discrimination is the main reason many Blacks are unable to get ahead, 15% higher than any older white cohort.

The racial disparity in the impact of COVID-19 – who is dying, who is infected, who is forced to work in unsafe conditions, who does not have enough money to pay the rent or put food on the table, who makes up a disproportionate share of the especially vulnerable incarcerated population – has opened many eyes to how deep racism’s poison runs.

A new cohort of creative racial justice activists, eloquent spokespeople, tech-savvy organizers, break-new-ground researchers and scholars, and radical elected officials has moved to the fore. Their work has made organizations, titles, and phrases like these household terms:

The gender-inclusiveness of today’s upsurge is another huge strength. Women and people whose sexuality did not fit into what was considered “normal” have played indispensable roles in U.S. movements since day one. But in 1968 those out front and setting the tone were almost exclusively men, and the image of the rebellions was frequently a black leather jacket. Today women, queer and trans people are out front as well as behind the scenes, and the resulting bring-your-entire-self welcome mat is a powerful magnet.

All these factors and more have fed into the size, breadth of participation, and passion visible in the streets. Today’s anti-racist front enjoys broader public support for the protesters than existed in 1968. A majority agrees the police are more likely to use excessive force with a Black person than a white person (up from only one- third four years ago) and 76%  say that racial and ethnic discrimination is a big problem, up from 51% in 2015.

The result is a stronger and larger front against white supremacy. Its strength is evident in the posture of most Democratic Party electeds. Past cases of police murder followed by rebellions usually saw this layer spend a hot minute condemning the abuse and then pivot to condemning if not ordering repression of the protesters. The script is somewhat different this time. At least so far, their main rhetorical fire is still directed at racism and the Trump administration’s push for a harsh crackdown.

There is absolutely no room for complacency on this score. A raft of fair-weather friends could defect at any time. But it is a sign of the uprising’s strength that it has kept them mostly on board thus far.

The uprising’s diehard opponents are armed to the teeth. But they are also gripped by fear.

Trump rode birtherism, immigrant bashing and anti-Muslim xenophobia to the White House. His administration is the command post for racist reaction today.

Even before the pandemic dented his re-election prospects, the Trumpist bloc was moving in the direction of authoritarian rule. Big sectors of his base really believe that if the country maintains even its stunted electoral democracy (much less a genuine one person, one vote system) “real (white, Christian) America” would come to an end. (Public Enemy called out their mentality 30 years ago: Fear of a Black Planet.) So Trump, now facing another opponent he cannot bluff into submission, is accelerating his attacks on the media, opposition voices inside and outside of government, and all remaining democratic space. He slaps the label of terrorist on Antifa and threatens ruthless repression, while his Secretary of Defense calls for “dominating the battle space.”

There could be a massacre tomorrow. And short of winning the demand just raised by the Movement for Black Lives – ‘Trump Must Resign’ – we are likely to see an effort to steal the 2020 election through some combination of voter suppression, vigilante intimidation (or worse) at polling places, and refusal to accept the results if a vote count says Trump has lost.

It will take a sustained effort – organized, focused and with the same scale and militancy as the current uprising – to prevent that from being successful.

TOWARD A THIRD RECONSTRUCTION

There is an anti-Trump wing of the ruling class. Their preferred candidate prevailed in the March Democratic primaries, campaigning on their then-consensus that winning in November should translate into returning the country to normal.

As the COVID-19 pandemic deepened and mass discontent heightened, that stance was abandoned. After getting Bernie Sanders’ endorsement, Biden announced that he was for “sweeping economic change,” not a return to the past. As the uprising has unfolded, Biden and other top-level Democrats have been scrambling to keep up, denouncing Trump’s repression and promising action on several items demanded by the protesters.

This scramble indicates that (1) they are susceptible to pressure; and (2) they are not united around an overarching vision of their own about where to take the country. They don’t like Trump; they don’t like those who don’t think “proper channels” are sufficient to dismantle white supremacy. But they are operating more out of inertia than any coherent plan to tackle the interlocking crises of racial injustice, neoliberal stagnation, unprecedented economic inequality, COVID-19, and climate change.

This means the forces demanding systemic change and international cooperation hold significant leverage. What will happen if Trump is beaten depends less on what Biden or his inner circle prefer than on the degree to which the righteous rage of today can be transformed into a durable political force.

The motion of Black America will be decisive. The current uprising and the response of different class and social forces ought to remove all doubt that race and racism lie at the very center of this country’s current polarization. It is overwhelming evidence that the Black Freedom Movement is once again the driving, galvanizing force for social change.

It is up to all movements and people of conscience to mesh with this driving force. To join those who have been waging the workplace, tenant, and public health fights during COVID-19 and those immersed in the urgent fights against climate change and war with those rebelling in the streets. The task is to forge a larger and more united version of the surges that gave us the First and Second Reconstruction, with clarity on the intimate connection between racism and capitalism.

The uphill climb will likely be slower and have more twists and turns than we would like. That’s the messy world of politics. But the building blocks for a Third Reconstruction that cuts deeper into every unjust structure in the country are in place. Black America is leading the charge that can propel us all into a new and better era.

Read original article to see and hear Tamika Mallory cut to the heart of the matter in a great video.

Rebellions, repression, and elections will be the focus of our next episode of This Is Not a Drill: LIVE. Join us for this important conversation on Wednesday, June 10 at 5 PT / 8 ET, when our all-star lineup will include Nelini Stamp, Jennifer Epps-Addison, Tami Sawyer, and Max Elbaum.