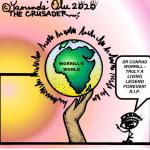 The Black community has had many individuals who have spent a great deal of their lives in service to group progress. Sometimes these people are lauded after their demise, while others get a chance to smell their roses while they are here. The Crusader is happy to say that Dr. Conrad Worrill, whose column has appeared in the Crusader for more than 25 years up to the current time, is one of the people who deserve our current accolades.

Dr. Worrill was no stranger to anyone who has been interested in activism. He is a writer, educator, activist, and former talk show host for the WVON call-in program On Target. He was also a special consultant of field operations in the Million Man March which took place October 16, 1995 and was a key operative with the National Black United Front (NBUF). His activism has centered on the need for greater independence in African-American life and helping young people better understand the relationships between power and institutions.

Dr. Worrill was born in Pasadena, CA, and moved to Chicago at the age of nine. Apparently, activism is in his genes, as his father was in the NAACP. His father was also involved in the YMCA. Dr. Worrill credits his father as a large influence in his embracing of a life of activism. Dr. Worrill is married and is the father of several daughters.

In addition to social activism, Dr. Worrill was an athlete who pursued basketball, football, and track. He also served in the army in Okinawa, Japan. Overseas he self-educated in African American History, politics and culture, and when he returned home, he attended George Williams College majoring in Applied Behavioral Sciences. Subsequent to that experience, he eventually received a Ph.D. at the University of Wisconsin, Madison, where his focus was “Curriculum and Instruction in Secondary Social Studies.” Upon receiving his degree, he taught at George Williams College and at Northeastern Illinois University where he served as longtime professor and administrator in the Center for Inner City Studies until his retirement.

Dr. Worrill’s activism has borne much fruit. He has been a tireless warrior in advancing the progress of Africans in the Diaspora. In addition to teaching, he was also elected as economic development commissioner of the National Coalition of Blacks for Reparations in America (N’COBRA). And as said previously, his widely lauded column, Worrill’s World, has appeared weekly in the Chicago Crusader.

As if that isn’t enough, Dr. Worrill has a new legacy that Chicagoans can enjoy. For 35 years he has advocated to bring an indoor track facility to Chicago. His dream has been realized. The facility broke ground in August 2019 and is located at Gately Park. It will give Chicago Public Schools’ student athletes accessibility to an indoor track.

The $55 million Gately Indoor Track & Field is a state-of-the-art 139,000 square-foot track facility that includes the area’s first hydraulically banked 200-meter track, an 8-lane track, a throwing cage, and space for field events including high jump and long jump. It also provides accommodations for football, lacrosse, volleyball, outdoor soccer games, basketball, and more. Dr. Worrill had been lobbying for a track facility in Chicago since the former Harold Washington administration. Washington was onboard but transitioned before it could become a reality. This project is the icing on the cake of years of an accomplished life of service, and Chicago youth will be able to benefit from it for years to come.

The Crusader is proud to be associated with a scholar/athlete/activist with such great vision. He deserves every honor that has come his way and those that he may receive posthumously.

We believe that every conscious African American should give kudos to those who have worked hard to make a better quality of life available to the Black community, and Dr. Conrad Worrill certainly qualifies as such a person. Most of all the facility should be named in his honor: The Dr. Conrad Worrill Indoor Track and Field Facility. R.I.P. Great Warrior; you will truly be missed!!! A Luta Continua.

Chance the Rapper said his "organizing efforts will not [be] forgotten."

RIP to the great Chicago legend Dr. Conrad Worrill, who my passed away yesterday. Your activism and organizing efforts will not forgotten. We need a new National United Black Front, and we’re well overdue for another MILLION MAN MARCH!!

Our deepest sympathies go to Dr. Worrill's friends, family and the countless people who have been inspired by his leadership and community activism. https://t.co/CzKFZKhyjl

Don't Skip A Beat! -- Sign up for the Crusader Pulse daily newsletter. Sign up to get breaking news, the latest headlines and updates to the stories YOU want to see. SUBSCRIBE