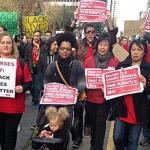 Close friends knew him as “Big Floyd.” He played basketball and football during his school years. He was a father of two who had moved to Minneapolis from Houston several years ago in order to find a job and start a new life. But on Monday, May 25th George Floyd, a 46-year -old black man, died at the hands of Minneapolis law enforcement. He was brutally pinned down to the ground and asphyxiated, by Police Officer Derek Chauvin, another three officers stood by, doing nothing to prevent George Floyd’s murder.  It took authorities almost 4 days to press charges against Chauvin and more than 10 days to hold the three bystanding officers accountable. George Floyd has since become the face of a movement aimed at dismantling a system that has legitimized racism, discrimination and oppression of communities of color across our nation.

That dynamic does not change without struggle, for example: the Civil Rights Act passed after 6 days of protests and conflict with police; Stonewall transformed a movement for the LGBTQ+ community because it was an armed conflict against police brutality; the cops who beat Rodney King weren’t arrested until there was confrontation with police forces; the armed conflict at Haymarket Square in Chicago was the spark for an 8 hour work day. America will not move or change unless we confront the institutions that suppress and oppress us. The senseless murder of George Floyd made this reality undeniable. His death was an attempt to kill the American Dream for future generations, nonetheless it has inspired our nation to come together, take to the streets and elevate our voices in defense of justice, equality and change.

This is not just a Black issue nor just a race issue. It is an institutional issue that has been built and maintained itself off Black exploitation and social division. The system is not protecting people or serving our interests, instead it protects property and serves corporate greed. But the way some police so flagrantly kill Black people, so indiscriminately murder them, so easily pull the trigger, highlights the disparity in treatment and the system that enables these behaviors, demands that we all say BlackLivesMatter.

Under the Obama Administration we began to see policies and procedures implemented that allowed citizens better ability to hold police accountable. They were not perfect, but they were steps in the right direction. They were actions taken by our government that acknowledged the problem and was now willing to be negotiable on solutions. These were all undone by the current administration. If this president wants to restore any faith in our communities, he will reimplement them now. If Vice-President Biden wants to show he truly cares about us, he will campaign to reimplement and enhance Obama era policies. If the institutions that govern and monitor the police do not show they are committed to that function, we the people are forced to do it ourselves.

Elected officials need to know we will not forget where they stood in the face of this murder. Will we have a government that blatantly sanctions Black murder, as it once codified in the Bill of Rights? Will we have a government that returns to its racist roots by advancing white supremacy as it once did under the Wilson administration? We the people decide that fate now and in November. We demand public hearings on this issue. We call on the United Nations to sanction this moment as a Human Rights Violation. We force law enforcement to arrest their own for brutality instead of us. We demand to be able to march in the streets like the “I Want a Haircut” protesters did a few weeks ago. We can remember that people should not fear their government, government should fear the people.

As Labor, our voice must be heard in the streets at this moment. It is not in our nature to stay silent in the face of continued injustice. The Labor Movement is the only check to corporate greed. That greed has led to decades of policing policies that value property more than lives.

Our purpose as a labor movement is to protect, include and advance economic justice, equal treatment, and opportunities for all workers regardless of race, ethnicity, gender, gender identity, sexual orientation, or religion. We will not remain silent as Black communities across our nation face growing racial discrimination, as their lives are robbed, and as corporate greed continues to fill the pockets of the 1% at the expense of the shameful exploitation of marginalized communities. We are committed to continue pushing for racial and economic justice policies capable of empowering black workers and elevating their voices in demanding equality. We will seek justice from our elected officials and hold them accountable for their actions – or lack thereof – toward rebuilding marginalized communities and ending racist policing practices that value property over lives. This is the work of the labor movement. We will do it in the ways we know best: to mobilize and organize our communities, get them to the polls in November, and elect candidates who will advance policies capable of uplifting this segment of the community. Our elected officials must be committed to eradicating the root problems marginalized communities face, such as mass incarceration, homelessness, health, education, and wealth disparities, and so much more.

The Labor Coalition for Community Action, as representatives of marginalized communities of working people, recognizes that as members of our society and history will judge those who do not join this fight for a more inclusive and just nation. Today our duty is to amplify the message and demands of communities of color, therefore, we echo the demands of the Movement for Black Lives: