Dispatches From the Culture Wars - Trump, Police, and the Far Right 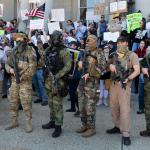 Armed far right groups are products of a long-standing cultivation project undertaken by the Republican Party and its media allies to agitate and radicalize its political base.

A legal scholar and historian puts the push to remove Confederate statues in context.

A red inverted triangle was used in the 1930s to identify anti-Nazi political prisoners incarcerated in concentration camps. This month, 88 ads with the inverted red triangle ran in pages for Trump, Pence and the official “Team Trump” page on the social network. They targeted all 50 states.

The GOP's claim that antifa is infiltrating George Floyd protests is a right-wing 'bogeyman' that bears all the hallmarks of a domestic disinformation campaign.

The history of racism and white supremacist membership in law enforcement agencies is long and well-documented. Disciplinary systems that struggle to hold officers to account for other offenses fail to remove racist police officers, undermining public trust in entire departments.

By Ryan Grim and Jon Schwarz
June 2 2020
The Intercept

Militarization has fostered a policing culture that sets up protesters as ‘the enemy.’

Police unions shield members from accountability for their actions, including coaching officers involved in use-of-force incidents on how to write favorable reports and having them collaborate to present a narrative that exonerates them from blame and places fault on the suspect.

In a country where one party has tried to define what it means to follow the word of God, others are loudly interrupting what has often seemed a one-sided conversation.