Doom Patrol Season 2 Review: Weirder and More Real Than Ever 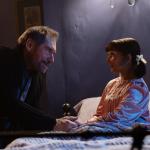 Here is an incomplete list of the topics Doom Patrol addresses in the first three episodes of Season 2: PTSD, child abandonment, the consequences of immortality, systemic issues in the criminal justice system, the cost of redemption, the weight of apologies, drug abuse, time travel, how your actions affect others, the trials of parenthood, legacy, and empathy.

That's not even getting into all the absurd setpieces that are present only a few minutes into the first episode. Remember, when we last left the band of misfits that make up the titular Doom Patrol, they had been shrunken down after a fight between an evangelical cockroach and a rat out for revenge in the Season 1 finale. So when we first reconvene with the team in Season 2 they are living on Cliff's miniature racetrack as the one regular-sized member of the team is making them tiny pancakes.

All of this is to say that Doom Patrol — the superhero show that could — is back in full force. Now that it's not streaming exclusively on DC Universe and is instead simultaneously airing on HBO Max as well, the hope is more people will watch it.

It's not a series for everyone. It's crude at points, and seems to want to double down on that in Season 2 with some inventive moments of gore in Episode 3 and just the sheer number of F-bombs that Robotman drops in just about every line of dialog. However, Doom Patrol has always been a series that balances sincerity and idiocy, talking about the implications of serious mental illness and the support systems we make in our quest for healing in the same episode as a donkey farting out a threat and then sucking a bunch of people into a portal. Striking that perfect balance and keeping it up into another season goes a long way towards making a show immensely watchable, as it turns out.

The not as good

Bottom line: Doom Patrol has always balanced the absurd and the grounded well, and that continues into Season 2 with a spectacular three-episode premiere.

What's the story in Season 2?

A big question going into the second season regarded the overarching conflict. With Season 1's main villain, Mr. Nobody, now trapped in a painting, there was a large hole and a lot of unanswered queries on the nature of Season 2. Episode 1, called Tiny Patrol, sets forth almost every thread for the season, allowing each character to reminisce about the events of the previous one by setting up new paths for them to journey upon.

The stakes are somehow more grounded than in Season 1 and more important.

Most of the Patrollers are dealing with the fallout from discovering that The Chief, Niles Caulder, who had positioned himself as a mentor and savior for each of them, was either partially or fully responsible for the events that ruined their lives. This, of course, hits Cliff Steele (a.k.a. Robotman) the hardest, since he blames Caulder for the death of his wife and the estrangement between him and his daughter.

However, there's a new variable in the mix this season: Dorothy Spinner, Caulder's metahuman daughter who can bring elements of her imagination to life. She's the rationalization for everything Caulder did to the Patrollers throughout the years, and ended up being the Macguffin for Season 1. She was something that Caulder wanted to protect at all costs, which meant he did some unfathomable things and made a lot of mistakes. Now that she's a fully realized character in Season with her own hopes and fears, there was, of course, going to be a reckoning.

At the end of Episode 1 Caulder has to decide to give up his longevity, the one thing he had been working towards throughout the 20th century in order to outlive and protect his daughter, in order to return the Doom Patrol to normal size. That, in turn, returns the audience to the status quo (if there is one in Doom Patrol), but it also sets up that aforementioned central conflict. The team has to restore Caulder's immortality so that he won't die before being a proper father to Dorothy.

While it's now up to the team to save the Chief again (this was the initial conflict in Season 1 before things got real), the stakes are somehow more grounded than in Season 1 and more important. Rita Farr is struggling with her desire to become a superhero and tame her stretchy powers while dealing with failure; Cyborg has re-entered the real world to deal with this PTSD and strikes up a relationship with a traumatized veteran; Jane is stuck in a loop of drug addiction; Larry Trainor once again goes back into his past to come to terms with how he's harmed others.

Doom Patrol has always made fun of C-list characters in DC's catalog to create memorable encounters. It pokes fun at the structure of supervillainy — the costumes, the over-the-top monologuing, the one-dimensional motivations — but then allows the Patrol to grapple with the consequences of facing these villains in a way that's become a part of the show's brand. That's apparent in the Season 2 encounter against Dr. Tyme (and yes, the Y is a part of the joke), who has a clock-shaped helmet in the comics. In the show, he created a time loop of August 1980, complete with roller disco and Donna Summer. How the Patrol "defeats" him involves a disgusting reveal and a lot of screaming.

Doom Patrol Season 2 is about how we relate to others, and the responsibilities we have as people in two-way relationships.

However, while the first three episodes are filled with villains that dedicated DC fans will recognize, including Dr. Tyme, the Candlemaker, and Red Jack, the true spectre haunting the Patrol this season is something more amorphous and less fantastical.

The Patrol is built up of people not only dealing with the trauma of their circumstances, but also people looking for the families, whether found or biological, that they left behind. Niles Caulder is the premier dad in the group, acting both as the surrogate father figure for many of the Patrollers themselves and the real father to Dorothy. Both him and Dorothy are grappling with the fact that he left her in Danny the Street for nearly a century and have to rebuild their relationship, even though with his sacrifice, Niles is on the verge of death after a short 139 years of life. The show poses the question as to whether his choices were the correct ones. After all, he locked her away for her own good, but in return essentially abandoned her in his quest to outlive her.

Then there's the question as to whether his choices, which ruined the lives of those in the Doom Patrol, were worth the result. Were his experiments on the team to discover immortality alright if his reasons were justified? He seems to think so despite what Cliff and the others yell back at him.

Cliff, however, is dealing with fatherhood in his own capacity. Now that he knows his daughter is alive, he's struggling with whether to reveal his identity to her. In typical Cliff fashion, he does so. Was his choice to reveal himself to her justified? Was his potential happiness worth her shock and unhappiness?

This question stems even to Larry Trainor, who partially came to terms with his past last season and the mistakes he made in regards to how he treated his wife while he was closeted before his accident and how he treated his lover. Now his inner conflict moves onto his children, the sons he seemingly forgot about. He travels to one of his son's funerals and confronts the other after decades away, but like Cliff, it's not as simple as saying "hey, I'm your dad can we be a family so I don't have to deal with the guilt of my mistakes anymore."

That's when it goes beyond just the idea of parenthood. Doom Patrol Season 2 is about how we relate to others, and the responsibilities we have as people in two-way relationships. Jane continues to dope up with the power-dampening drug she found in Season 1, but the personalities in the Underground aren't happy. One of them asks Jane during her intervention, "Do you think about how your actions affect others?"

Episode 3, specifically, is all about these quandaries. There's a heavy-handed moment where the sadistic Red Jack tortures Niles by literally making his perspective Robotman's. Cliff had been yelling at Niles for multiple episodes about the Chief will never understand his pain, and then the villain does that exactly.

There are other moments where the writers are heavy-handed in the narrative (having Dorothy, a character whose childhood fears and anxieties become real isn't exactly subtle), but Doom Patrol has never been inconspicuous. It's a series that throws comic books, super villainy, trauma, and everything that comes with it at the audience and never holds back.

Doom Patrol the series, like the characters themselves, is the underdog. It's like nothing else in DC's catalog. It's both a whacky superhero show like Legends of Tomorrow on the CW, which leans into the absurdity of comics, and a character drama about mental illness, trauma, and the support systems we build for ourselves. It's both edgy and sincere, grounded yet fantastical.

You might think this doesn't work but it does. The team manages to strike a perfect balance, creating scenarios where the team has to fight a guy with a clock for a head while also yelling at each other over their problems. There's as likely to punch out Nazis as they are to sit around quietly and cry over trauma like it's a therapy session.

After watching the first three episodes of Season 2, it's clear that the team is continuing that trend. The show is as delightful and gut-punching as ever, with new inner conflicts to stand up against the supernatural nonsense that comic books love. Sure, the stakes are lower (for now) than the reality-manipulating sociopath we got as our main villain in Season 1. However, it feels just as relevant that the new antagonist is the one that had been sitting there all along.