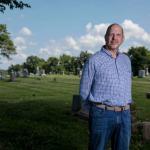 Illinois schools are not required to teach a class in the state’s history. Perhaps as a result, you may be surprised to learn that Illinois at one time allowed slavery. But Darrel Dexter, a historian and high school social studies teacher in Tamms, has been researching, writing about and teaching the history of slavery in Illinois for years. His book about the topic, “Bondage in Egypt, Slavery in Southern Illinois,” was published by Southeast Missouri State University in 2011, and described by one academic reviewer as “the most comprehensive account to date of racial slavery in Illinois.” I first met Dexter at the public library in Anna, Illinois, while reporting on its history as a sundown town. Since then, he’s helped me better understand the parts of our state’s history often left out of classroom curricula and, as a result, the public’s understanding of Illinois history.

I recently spoke with Dexter just ahead of the Juneteenth holiday, which commemorates the ending of slavery. Here is an edited version of our conversation.

In learning about the Civil War, we typically learn there were “slave states” and “free states.” In what ways does Illinois complicate those seemingly clear-cut definitions?

Illinois is what I would call a quasi-slave state. And what’s surprising to people is that it existed here within the law. It begins with the colonial slave laws that came from France (because Illinois was a French territory). And so slavery, at least the enslavement of Africans and then later African American people, started in the French settlements, at least as early as 1720, maybe even before that. And then the Northwest Ordinance (an act that provided a path for much of the Great Lakes region to be admitted to the Union) stated that there shall be neither slavery nor indentured servitude, nor involuntary servitude, except as the punishment of crime. And so people seem to think, “Well, that does it for slavery.” But people still brought slaves in, in violation of the law.

But then as early as 1803, a loophole was created that [essentially] said: “Bring your slaves to Illinois. It’s fine. Just go through the formality of an indenture contract.” Some contracts were for 99 years.

But most indentured people really weren’t given a choice. If your master, or someone who’s claimed to be your master, or has told you they were your master for, you know, 20, 30, 40 years, tells you to put your mark [signature] on a paper that says you’re willing to continue as my indentured servant, it’s not likely that someone would refuse. 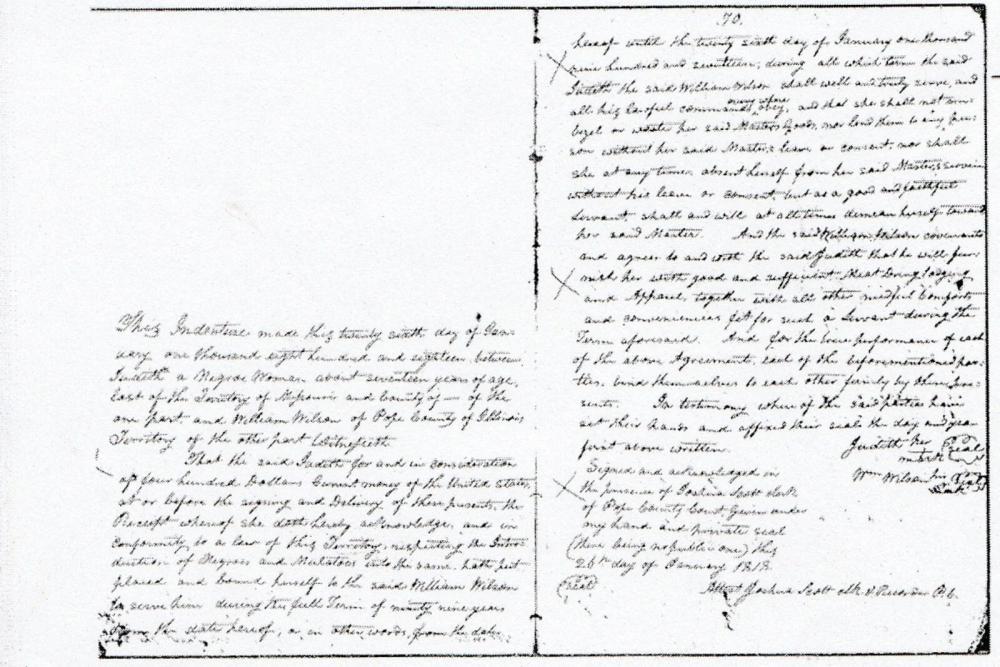 In 1818, a woman by the name of Judith signed a contract for indentured servitude for 99 years with a man named William Wilson of Pope County. Judith was 17. She would have been 116 when she was to be freed on Jan. 26, 1917. (Courtesy of Darrel Dexter, obtained from records in Golconda, Illinois)

This reminds me of something you said once before about slavery being adaptable. In a talk you gave at the Chicago History Museum last year, you said, “Slavery was called a ‘peculiar institution’ for a reason — and the reason is because it can be adapted.” Can you tell me a bit more about what you meant by that?

I meant that when people think about slavery, and this is largely due to the fact that so many of us get much of our information from the entertainment media, we envision slavery as the Deep South and working on cotton plantations. And what really surprised me as I began researching slavery in Illinois was there weren’t the big cotton plantations, but at the same time there was slavery. And so our image of slavery is not necessarily wrong, but it’s a lot more complicated. It’s a lot broader. I think that what we tend to do oftentimes is think of slavery and racism as something they have down South and kind of with a judgmental attitude: “You know, we’re not like that [in Illinois]. We don’t have slavery here. We didn’t have slaves.” Actually, we did. It was just a different form that was adapted to meet the needs that we had for enslaved people.

What were some of those needs and how different did that look?

Dexter: Here in Union County, although it’s not officially documented, when our first log cabin courthouse was built on the square in Jonesboro, the person that received the contract to build that log cabin was a slaveholder named Thomas Cox. He would have sent enslaved people to work, cutting the trees and building the cabin. Slaves can work in cornfields just as well as they can work in cotton fields.

In the years leading up to the Civil War, where was Illinois positioned in terms of slavery?

What would African Americans who sought new livelihoods in Illinois have faced arriving here in the mid-1800s?

Well, beginning of course in 1853, settlement was illegal. The counties that had a free black population already in 1853 kept detailed records. All the free black people were listed by name, physical description and origin. They had to prove that they were free in order to live in Illinois legally.

Those documents ... those were what’s referred to as “freedom papers”?

Right. So if you were formerly enslaved or even if you had been born free, you should always have had those freedom papers handy in your pocket. In the 1820s, Illinois had a state law that said all white men are required to stop any black person and have them prove that they were free. I can remember a woman asking me once if I thought this was the beginning of policing of black communities, and I never really saw the connection before she mentioned that. But every white man was required to do it. If people could not prove their freedom documentation, they were placed under arrest — basically a citizen’s arrest — taken to a justice of the peace, put on trial, advertised in the newspapers as a runaway, and then the white person would receive a reward.

So there was incentive to do this.

Right. Chicago newspapers said there were people making a living doing this. And they became known as the kidnapping gangs, because basically they were kidnapping people to make a profit.

Why don’t we learn about this in Illinois? We know of Illinois as being the Land of Lincoln, the home state of the Great Emancipator, yet as you say Illinois was a quasi-slave state.

Well, it’s definitely ironic. When the Civil War started, it was promoted as the war to save the Union. Hundreds of thousands of white men from southern Illinois enlisted not to free the slaves but to restore the Union. And then by 1863, when it became more clear it was a war to free the slaves, many people deserted.

Today, the Civil War is taught as a war to free the slaves and that Illinois was a “free state.” The reality is it’s a little more complicated. People don’t know about it because people don’t talk about it. Here in Illinois, our state history is not a required class. If people aren’t taught about it and they don’t hear the stories, then of course they don’t know about it. That just encourages this myth that in Illinois and in the Northern states there was no racism here. There was no slavery. You know, that it’s just bad white people in the South that were the problem.

Did Lincoln’s assassination sort of let us off the hook in terms of acknowledging the state’s role in slavery? When an important public figure dies, the way that we tell their stories is often shifted to be about their accomplishments, and these nuanced, complicating factors can get pushed away.

I’m not sure. Illinois wasn’t the only Northern state that had slavery. Slavery existed in other Northern states. In the 1850s, with the publication of “Uncle Tom’s Cabin” and then stories circulating in the press about the evils of slavery, some people began to very gradually become abolitionists. So I think the pendulum was already moving. And then of course, when Lincoln was assassinated, that image of the Great Emancipator did help block out the state’s history with slavery.

Why would it be important for people to learn about this sort of state history?

Whenever I write about something that’s not flattering to the region or to the state, well-meaning, nice people will say: “Why do you always write about the negative stuff? Why do you always have to bring that up?” My students were doing research on the Ku Klux Klan in Alexander County and after they did a presentation, someone said to me: “Why did you have them do this? We’re trying to forget that. We’re not like that anymore.” And I keep saying that, until people confront their past and acknowledge that it’s there, you can’t move forward.

Logan Jaffe is the engagement reporter for ProPublica Illinois. She comes to ProPublica by way of The New York Times and Chicago Public Media (WBEZ). She was the multimedia producer for WBEZ's Curious City, a journalism project fueled by audience questions about Chicago, and previously an embedded mediamaker with The New York Times' Race/Related newsletter in collaboration with the documentary showcase POV, in which she reported and produced an audience-driven project confronting the pervasiveness of racism through everyday objects. She was also a producer with The NYTimes' Daily 360 project. In Chicago, she was a recipient of Chicago Filmmakers' Digital Media Production Fund for "Battle Flag," an interactive documentary which questions the meaning of the Confederate battle flag in America.

ProPublica Illinois is a nonprofit newsroom that investigates abuses of power. Sign up to get weekly updates about our work.