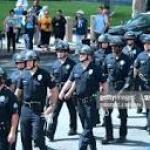 Reform advocates say the spending partly explains why police unions have defeated most reform measures in recent years, even as high-profile police killings of unarmed black men sparked waves of public outrage including the current national demonstrations against racism sparked by the death of George Floyd in Minneapolis.

The Guardian identified about $87m in local and state spending over the last two decades by the unions. That includes at least $64.8m in Los Angeles, $19.2m in New York City and $3.5m in Chicago. Records show that most spending occurred during the last 10 years as contributions and lobbying dramatically increased in most jurisdictions.

At the federal level, police officers and their unions have spent at least $47.3m on campaign contributions and lobbying in recent election cycles, according to Maplight data and US Senate and US House records.

The totals include payments to city council members and state legislators, as well as lobbying costs. The amount that police unions have spent during these periods is probably even higher as incomplete state campaign finance data makes it nearly impossible to pin down the true figure.

Several unions contacted by the Guardian did not respond to requests for comment. But Tab Rhodes, president of the Los Angeles County Professional Peace Officers Association (PPOA), wrote in a recent letter to its 8,000 members that the union needed more money to “establish collaborative relationships” with lawmakers.

Though the PPOA and sheriff’s department have spent more than $10.4m on political contributions in recent years, Rhodes is soliciting $2m more in annual donations from members.

Political spending is one of two tools police unions use to influence politicians. Industry observers who spoke with the Guardian stressed they also effectively portray reformers as “soft on crime”, and lawmakers have feared being branded as such.

However, public sentiment has shifted hard against police in the wake of Floyd’s killing, and now many expect to see a jump in political spending to block renewed reform efforts.

“Law enforcement is going to spend its money defensively – instead of pushing for changes in the law that work to their benefit, their primary goal is one of self-protection,” said Dan Schnur, a professor of political communication at the University of California, Berkeley, and campaign finance reform advocate.

The shocking images of Los Angeles police violence during the Floyd marches were preceded by decades of similarly dramatic and unsettling attacks on often peaceful civilians. The incidents are tied to deep controversies over racial profiling and a range of other serious systemic internal problems at the LAPD.

“Problems are constantly exposed but nothing happens because there’s zero oversight at all,” Khan said. “That goes to show the power of the police unions – people don’t want to touch any of this and the police get more money and resources.”

Activists say political spending is partly to blame, and union money flows to lawmakers who are supposed to be reforming the department. The Guardian identified more than $21.6m in state and local political spending by the Los Angeles Police Protective League (LAPPL), which represents nearly 10,000 LAPD officers.

It and other Los Angeles county police unions strategically direct funding at key players, including Herb Wesson Jr, chair of the council’s ad hoc committee on police reform. Wesson has received at least $751,000 from police unions and faced heavy criticism for using his role to make it more difficult to hold officers accused of wrongdoing accountable. He did not respond to a request for comment from the Guardian.

Meanwhile, the city’s public safety committee chair, Monica Rodriguez, has taken at least $111,000 from unions. Though she’s supported the department for years, she backs a proposal to cut $150m from the LAPD’s budget in the wake of Floyd’s killing. Police unions have now vowed to unseat her.

In total, current members of the council’s two police oversight committees have received about $1.3m from police unions.

The LAPPL also spends on those who hold police department purse strings. The city council budget committee chair Paul Krekorian this year helped advance a budget that included a 7% funding increase for the LAPD. In February, an independent committee that supports him received a nearly $25,000 donation from the LAPPL.

Spending on a single race is rising to record levels this year as police unions from around California have sent more than $2m to help the police-friendly incumbent district attorney Jackie Lacey take on George Gascón, a police reform supporter, in Los Angeles county.

Police unions also flex their muscle on statewide ballot proposals. California police union money in 2016 helped block a proposed ban on the death penalty while unions successfully worked to pass a counterproposal to speed up executions. The LAPPL has also given to hundreds of state legislators, and unions statewide have donated more than $752,000 to members of the state assembly’s law enforcement committee.

The activity is not restricted to the nation’s largest departments. The Peace Officers Research Association of California, a statewide union with membership that includes small departments, has spent at least $34m on campaign contributions and lobbying in recent decades.

Still, the true extent of police spending and its impact remains unknown. Some lobbying records in Illinois and New York are shielded from the public, and Samuel Walker, author of The Police in America, noted that the media, academics and civil liberties groups haven’t closely scrutinized unions’ spending or other activities until very recently.

“The unions have been remarkably unopposed since the early 70s, and that began to change with Ferguson, and is dramatically changing in the last two weeks,” Walker said. “We definitely need more sunlight on this issue.”

But the Floyd protests are now having an impact.

A years-long battle to repeal 50-a, an unpopular New York state law that shields police misconduct records from the public, has often highlighted how effectively police unions use money to help block legislation they vehemently oppose.

The unions in recent years spent about $1.3m supporting vulnerable incumbent legislators who opposed the repeal and – despite intense pressure over the decades – efforts at repeal were repeatedly blocked, including by the governor, Andrew Cuomo.

Cuomo dug in until police killed Floyd and officers brutalized protesters in the subsequent marches that erupted in the streets of New York City.

“The murder of George Floyd was just the tipping point,” Cuomo said recently as he later announced reforms that include a 50-a repeal and inadvertently highlighted the extraordinary circumstances often needed to pass legislation over police union opposition.

“The day before George Floyd, this legislation was going nowhere. It did a 180 after the Floyd protests,” said John Kaehny, executive director of Reinvent Albany, a New York nonprofit that advocates for government transparency.

Part of the solution is to give everyday residents calling for reform a voice equal to those of groups like police unions, said Chisun Lee, deputy director for the Brennan Center for Justice’s election reform program. Recently enacted rules that match small, individual campaign contributions with public dollars will give more power to reformers starting in the 2024 state and local elections.

“These sort of structural reforms may sound technical in a time like this, when the public is rightly focused on huge scandals,” Lee said. “But we need ways for the millions of people who are impacted by policing policies to be heard as campaign donors.”