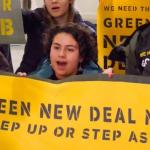 There’s a lot to like in the House Select Committee on the Climate Crisis’s 538-page climate plan. Put together by nine Democratic majority members of the committee through hearings and consultations, the document released Tuesday is more ambitious than anything that could have come out of Capitol Hill even a few years ago—thanks largely to pressure coming from inside and outside the halls of power.

The plan, though, also imagines the United States fighting climate change alone, an isolated government with an economy broadly resembling the one it had half a century ago. It’s an odd missed opportunity for Democrats to internalize what climate campaigners, particularly those in the global south, have been observing for decades: Carbon doesn’t stop at borders just because policy does.

The wider world out there—a world to which the U.S. still enthusiastically exports fossil fuels—goes mostly unmentioned in the report, as does the fact that policymakers here hold enormous sway over international institutions with the power to shape global trade flows toward low-carbon ends. The plan touches on the Paris Agreement and the Green Climate Fund set up under its auspices. But its discussion of the international aspects of climate change largely ignores pressing global governance questions and conjures up images of an America under attack, fending off hordes of climate refugees with a military that’s procuring green tanks.

“The climate crisis amplifies geopolitical threats as resource scarcity and catastrophic events fuel conflict, mass migration, and social and political strife,” the report states. Few experts would dispute this statement. Yet the report’s prescription for meeting such challenges relies on combative rather than cooperative approaches: “Federal leadership requires coordination across the science, security, and defense enterprises to confront threats to military infrastructure and operations and global security.” While the plan encourages wildlife migration across borders and to more suitable climates, it treats human migration mainly as a menace, directing the Department of Homeland Security to join other agencies in preparing for “climate-driven internal and cross-border migration.” Laudably, the report’s authors do recommend admitting and offering formal protections for 50,000 “climate displaced persons per year.” But given that 16.1 million people were displaced just last year by weather-related disasters, it’s certainly possible that modest quota could be quickly overwhelmed.

Framing the international dimension of the climate challenge as a national security threat is pretty common, even among some progressives. Besides dabbling in  xenophobia, this narrow lens also comes at the cost of more comprehensive solutions. In particular, this framing tends to downplay the need for a more compassionate immigration policy overall as people seek refuge from the climate crises the U.S. has played a major role in creating.

The committee’s plan takes a blinkered view of what a holistic U.S. response to the crisis could look like. “In poor and fragile nations, these climate-driven shocks can also drive political instability and refugee movements. U.S. foreign policy and aid can help to address the global humanitarian threats of climate change before they become national security threats,” the committee states forebodingly. Without listing any specific figures, it further recommends that Congress “contribute the funds necessary to meet our financial commitment to the Green Climate Fund,” the grant-making body set up as a part of the United Nations Framework Conventions on Climate Change to furnish resources for mitigation and adaptation, and integrate climate into the work of the U.S. Agency for International Development.

In reality, there’s much more the U.S. can do to help finance the path to a low-carbon future, as well as many places where its obstructionism is actively hampering the world’s efforts to get there. As global south countries face massive capital flight, mounting death tolls from Covid-19, and deep depressions, U.S. Treasury Secretary Steven Mnuchin has continually blocked the International Monetary Fund extension of Special Drawing Rights, a currency pegged to five different global currencies that—if issued—could lend much-needed relief to struggling low- and middle-income countries. Agreeing to make those funds available wouldn’t be purely altruistic, either: Resource-rich, monetarily poor countries under duress will be more likely to dig up and burn fossil fuels as a means of quick cash—bad news for everyone on this planet. These countries lack the funds to prepare adequately for climate damages, much less leapfrog over the fossil-fueled development that helped build Northern countries’ wealth and transition to renewables. The United Nations Commission on Trade and Development has done detailed work fleshing out what democratic multilateralism, rising to the challenges of a hotter and wetter twenty-first century, could look like. Democrats interested in a thoroughly global energy transition—indeed, the only kind capable of staving off catastrophe—might do well to consider it.

Among the best things the U.S. can do for the climate is to decarbonize itself as quickly as possible. The committee’s plan falls short on that front, too. No firm date is given for the U.S. to stop expanding its fossil fuel system. Instead, it offers periodic paeans to experimental carbon-capturing technologies that have yet to prove they can suck meaningful amounts of carbon out of fossil fuel production and could artificially extend the life of coal, oil, and gas. Despite plenty of evidence indicating the U.S. could decarbonize faster with already existing technology, the plan sets a leisurely goal of making all cars zero-emission by 2035, the power sector net-zero-emission by 2040, and most everything else slower than that.

This is a far cry from the benevolent global climate leadership the committee claims to be championing. The enormous wealth the U.S. has built enables it to transition rapidly off fossil fuels if so desired. As global south countries have long pointed out, far-off goals like the committee’s  net-zero-by-2050 target leave poorer countries to shoulder a decarbonization burden that wealthier countries are much better positioned to carry.

The plan also lets polluters off easy. Instead of placing any limits on fossil fuel exports, it instructs the Federal Energy Regulatory Commission to consider the climate costs of greenlighting new infrastructure. Rather than collaborating with countries like China—which has spent years developing specialized industrial processes for clean technologies—the plan refashions Trump’s idea of energy dominance for a greener but still harshly unequal world: The U.S., hoarding intellectual property according to this vision, will dominate clean energy export markets for everything from renewables to so-called clean coal.

Notably, this vision also fails to reckon in any way with current economic realities. The kinds of midcentury-style industrial production imagined in the plan are folksy anachronisms at this point. The world’s most cutting-edge clean tech factories, for instance, employ relatively few people on their shop floors, which are dominated by automated processes. Decarbonizing without throwing millions into unstable living conditions will require transitioning workers now in emissions-heavy sectors to greener work, not holding out false hope for a manufacturing economy that’s long gone. There are plenty of well-paid and unionized jobs to be had in an energy transition—in insulation, maintenance, and building a smart grid, for instance—but also lots of sorely needed work that’s already low-carbon, much of it today done by mostly underpaid women in professions like teaching and nursing. These green jobs—in effect, expanding sectors that already exist—may not satisfy outdated wartime fantasies of what a full-scale economic mobilization will look like. But maximizing decarbonization, minimizing disruption, and building a more broadly sustainable society will require such adjustments. It will also mean collaborating with international partners rather than jockeying to outcompete them.

For example, even the modest industrial policy the committee’s plan advocates (i.e., “Buy Clean” government procurement policies) would benefit from multilateral cooperation to reimagine what international institutions are for. Without that, such a plan could easily run afoul of an international trade regime designed to keep capital as mobile as possible, whatever the costs to the planet. As with the IMF or World Bank, the U.S. could feasibly leverage its enormous power in bodies like the World Trade Organization to rewrite these old rules so as to align with the planet’s needs. But the committee offers scant discussion of how to change the rules of a game now rigged against decarbonization.

As green groups have noted in the last few days, the House committee’s hefty climate plan is a step in the right direction. For now, though, Democrats are still holding fast to George H.W. Bush’s bipartisan wisdom, dispensed at the Rio Earth Summit in 1992: “The American way of life is not up for negotiation.”

[Kate Aronoff is a staff writer at The New Republic. She is the co-author of A Planet To Win: Why We Need A Green New Deal (Verso) and the co-editor of We Own The Future: Democratic Socialism, American Style (The New Press).She can be reached @KateAronoff.]