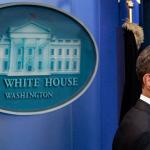 President Obama has riled loyal Democrats by tossing Social Security onto the table in his poker game with Republicans. Not to worry. I think I know how this story ends. A year from now, when the 2014 congressional campaigns are hot underway, Republicans will be running against Obama-the-slasher and promising to protect Social Security from the bloodthirsty Democrats.

By then, having lost on his too-cute strategy, the president will be reduced to lamely reassuring old folks. Really, he didn’t actually intend to cut their benefits, really he didn’t. It was just a ploy to get tightwad conservatives to give in a little on tax increases. Republicans can pull out the videotapes in which Obama and team explain their high-minded purpose—sacrificing the Democratic party’s sacred honor in order to get Republicans to play nice.

Forget about that. House Speaker John Boehner promptly brushed off Obama’s gambit. If the president wants to whack Social Security, Boehner suggested he can do it, but don’t expect the GOP to collaborate in such a plot. “If the president believes these modest entitlement savings are needed to shore up these programs, there is no reason they should be held hostage for more tax hikes,” Boehner said.

The president set this trap himself; now Boehner will spring it on him. Does Obama not remember how Democrats lost control of the House back in 2010? The party got very little credit for enacting health care reform because the Republicans had already demonized the accomplishment as a threat to the much-beloved program of Medicare. The rightwingers promised to save Medicare from bloodthirsty Democrats by repealing Obama’s new reform program. This was all a ridiculous lie, of course, but the White House declined to call out the liars. Instead, Obama responded with flowers. This time, he is taking Republicans out to diinner.

So here is what I expect to happen. The elaborate and confusing charade of deficit politics will continue through this year and next—both parties solemnly seeking to shrink the swollen federal deficits—and distracting Washington from the real economic threat of stagnation or worse. At the end of the day, Social Security will not be cut. Nor will much else be accomplished, for good or for ill. Yes, the two parties may eventually approve some grandiose budget resolutions—official promises to cut spending drastically. But that process is usually a charade in itself with a long-established history of fiction and fantasy.

These budget promises do not become real until Congress authorizes projects and appropriates the money. The appropriators have the real power and they can change the numbers and designs and whatever else they wish. Depending on how senators and representatives feel at the time, they can embrace the promises and cut specific spending or totally ignore whatever the budget resolution had promised the public.

So who gets tell the folks that their FiCA deductions were a joke—only an accounting fiction? The financial problems facing Social Security are easily fixed (as Obama himself has said) and are actually 30 years away. When the Congressional Budget Office is required to “score” Obama’s so-called cost-of-living reform, it will be compelled to announce that whacking the old folks contributes not a penny to reducing the federal government’s deficits.

In fact, there is an even bigger lie concealed by the fiscal scolds and ignored by witless media, too. Again and again, self-righteous critics have portrayed Social Security as the profligate monster borrowing from the Treasury and sucking the life out of federal government.

That is the real crisis that makes the financial barons and their media collaborators so anxious to cut Social Security benefits. They would like to get out of repaying the debt—that is, giving the money back to the people who earned it. The only way to do this is cut the benefits—over and over again. Count on it. If the president and Congress succeed in this malicious scheme, they will come back again and again to cut more and more. If the politicians join this sordid conspiracy, voters should come after them with pitchforks and torches.