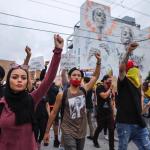 A Muslim American woman arrested at a Black Lives Matter protest was forced to have her booking photo taken without her head covering. She was then left without her hijab for seven hours, while the photos were made available to “countless media” outlets, some of which published her photos online.

Cancellation or Persuasion By Suzanne Moore, July 3, 2020, The Guardian

The hidden, ugly story of the new Jim Crow tactics tested in the recent primaries—and coming soon to a state near you.

Will Consumer Culture Devour the Upsurge?

Present-day protests may make corporations less racist without affecting their essential nature. They were able to digest, and even profit from, the hippies and protesters of the 1960s and early 1970s.

By Nicholas Greyson Ward
July 1, 2020
In These Times

With the youth, the political leanings of the Mormon church may be shifting.

Was William F. Buckley's politics simply “a more articulate version of the same deep ugliness and bigotry that is the hallmark of Trumpism”?

Queer authors Alok Vaid-Menon, Kimberly Drew, and Adam Eli on what it means to “dream more boldly” about the future of queer liberation.

Writers are challenged to consider the point of view of who is telling the story, and thus who controls the narrative…from the hardboiled to the cozy.