Housing Is a Worker Issue: Why the Labor Movement Should Support the 'Beyond Recovery' Campaign 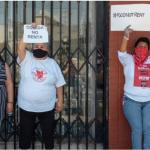 The uprising for Black Lives has opened new possibilities for organizing. But besides fighting police brutality, unions and worker organizations can address racial injustice by organizing around the issues of workers' everyday lives.

As Bianca Cunningham wrote in Labor Notes, “Many Black people do not see their union as a vehicle to address the issues they face every day.” This is true for many other workers, too. Unions serve their members when they fight not only for improvements in the workplace but also against inequities in society.

One such everyday issue is housing. Even before the pandemic, a large share of Americans cited housing availability and affordability as a major and growing concern. With rising unemployment, housing experts are predicting that 20 percent of all renters will be at risk of eviction by early fall.

As with other aspects of the pandemic, Black and Latino people will be hurt the most. As reported in the Washington Post, a recent Census survey found that “about 44 percent and 41 percent of adult Latino and black renters, respectively, said they had no or slight confidence they could pay their rent next month or were likely to defer payment.” Majority Black zip codes already had the highest rates of eviction.

The CARES Acts and expanded unemployment benefits have helped some cover their rent or mortgage, but those benefits are scheduled to run out at the end of July. Eviction moratoriums in many cities, meant to provide temporary relief, will eventually expire.

Unions and other worker organizations can play a unique role in solving the housing and debt crisis both for union members and for the unorganized.

Decades ago, unions built affordable housing cooperatives for workers. From the 1920s to the 1970s, dozens of unions played a role in constructing cooperatives with thousands of units. Some even include cooperative grocery stores, movie theaters, and libraries.

For many union leaders the move to housing was a natural progression of their organizing. David Dubinsky, president of the International Ladies Garment Workers Union, once said, “We have wiped out the sweatshop; we return to wipe out the slum.”

Unions have also promoted legislation and programs to make housing more affordable. This has been more prevalent in other countries, such as in France where workers are entitled to government housing subsidies based on income and family size.

In 2019 the Chicago Teachers Union took on affordable housing in their contract campaign, making demands on city government. Though they didn’t win, CTU demonstrated that unions can fight for affordable housing at the bargaining table and outside of it.

One framework that labor groups are turning to is “Bargaining for the Common Good,” where unions partner with community groups around issues such as housing. The Massachusetts Teachers Association and the Boston community organization City Life/Vida Urbana are working together to educate teachers, students, and their families about tenants' rights. They helped pass an eviction and foreclosure moratorium in the state legislature, and the MTA has endorsed rent control legislation.

They called for better wages and conditions for workers, more affordable housing, and fair pay for construction workers building that housing—no more employer wage theft. They said that developers who receive public money and tax incentives to build public housing should have to pay a living wage.

Perhaps one unexpected connection between unions and housing rights is private equity. Private equity is a way to create a big pool of money for investments. While much of that money comes from wealthy individuals, some of it comes from union pension funds.

Private equity firms frequently buy public corporations and take them off the stock market, restructure them, and then sell them off for a big profit, often while saddling the companies with crippling debt. Private equity investors may also buy up small companies and consolidate them into larger ones, laying off workers, cutting benefits, and perhaps destroying a union.

Investors have increasingly used private equity funds to buy up housing as well. Between 2011 and 2017, private equity groups bought over 200,000 homes across the country and converted them to rentals. They have been buying up mobile homes in rural areas and large apartment buildings in major cities. As more and more housing units fall into fewer hands, they can drive up rents.

Unions and housing activists can work together to fight these companies, like the Blackstone Group and Starwood Capital, that both lay workers off and drive up housing prices. Coalitions should support efforts to regulate private equity firms and fight to exclude them from any future stimulus bills.

Labor organizations and tenants’ associations have a lot of common ground. After all, tenants are workers, and workers need housing. When workers have more stable and affordable housing they are not as dependent on their employer. Workers may be willing to take more risks, such as trying to organize a union or to go on strike, if they are not one day away from eviction.

In some cases, the groups have shared tools and strategies. For example, tenants in Brooklyn have formed the Crown Heights Tenants Union and are working to negotiate contracts with landlords. Their plan is to move toward a neighborhood-wide contract to fight gentrification through rent freezes, regulated increases, and repair and renovation regulations.

One possible model is the Ann Arbor Tenants Union, formed in 1968, which organized for a citywide rent strike and demanded to be the sole bargaining agent for all renters in the city. The tenants did not win that demand but did win much-needed apartment maintenance and have continued to fight for tenant rights for decades.

In 2017, the Los Angeles Tenants Union helped renters organize a rent strike and win a three-year contract with a landlord who had multiple apartments. These campaigns can benefit labor organizations as well, as they teach workers organizing and bargaining skills.

On May Day this year, workers around the country took part in one-day strikes against Amazon, Whole Foods, InstaCart, and Trader Joe's. The same day, tens of thousands of people planned to participate in rent strikes, though it is difficult to get accurate numbers on how many actually participated.

One group, We Strike Together, claims to have recorded 790,000 households who have refused to make rent or mortgage payments since mid-March. This includes cases like a group of tenants from 15 buildings in New York City that stopped paying rent and demanded their landlord bargain with them collectively to provide relief.

In a borough outside Pittsburgh, tenants have formed the United Neighborhood Defense Movement to demand their landlord, C.P. Development, negotiate over evictions and maintenance. They are calling for a rent strike August 1.

Last year, labor and community organizers Stephen Lerner and Christina Livingston called for a national Bargaining for Housing Justice campaign that could incorporate many of these elements and more.

They argued that campaigns must “expose the role key employers may play in making housing unaffordable”—such as expansion that tears down affordable housing or investments and pension funds that are tied up in private equity. Labor-housing coalitions can launch campaigns directly targeting the offending companies.

The need is greater than ever. When labor organizations and tenant groups work together, their demands speak more holistically to people’s needs, and they can increase each other’s power.

Another way the labor movement can support access to housing is to take part in the “Beyond Recovery” campaign.

It's run by the Right to the City Alliance of more than 80 organizations that have been fighting against gentrification and for affordable and safe housing for low-income, Black, and Brown communities. The Beyond Recovery campaign calls on local, state, and federal governments to invest in sustaining human life and building a foundation for life after the pandemic subsides. Their demands include:

Labor organizations can support the campaign. Sign on to the list of demands at bit.ly/beyondrecoverydemands. Ask members and families to fill out this survey and tell their stories of how this crisis is affecting them: bit.ly/cancelrent.

Unions can join in the growing number of rallies and actions against evictions. One way to follow the movement is to scan social media for #cancelrent.

[Stephanie Luce is a professor at the School for Labor and Urban Studies, City University of New York, and a member of the Professional Staff Congress-CUNY/AFT.]

ORGANIZING IN A PANDEMIC

For news and guidance on organizing in your workplace during the coronavirus crisis, click here. »