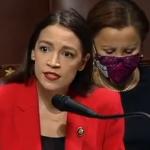 On Thursday, Rep. Alexandria Ocasio-Cortez addressed retiring Republican Rep. Ted Yoho’s nonapology for calling her a “fucking bitch” earlier in the week. In 10 devastating minutes, Ocasio-Cortez shamed the Florida congressman as emblematic of a culture of misogyny and workplace harassment, tied the Republican Party to that abuse, and once again demonstrated that she is one of the most impactful voices in the House Democratic Caucus.

Yoho accosted the New York representative on the steps of the Capitol on Monday over comments she had made connecting crime rates to economic marginalization—a theory widely accepted by criminologists. After Yoho told Ocasio-Cortez that she was “disgusting” and “freaking out of her mind,” the New York progressive responded that he was being “rude.” As Yoho walked away with Rep. Roger Williams of Texas, and within earshot of a reporter from the Hill, he then used the slur.

Then on Wednesday, Yoho took to the floor of the House “to apologize for the abrupt manner of the conversation I had with my colleague from New York.” He went on to deny that the thing that Ocasio-Cortez and a reporter witnessed had actually happened. “The offensive name-calling words attributed to me by the press were never spoken to my colleagues, and if they were construed that way, I apologize for their misunderstanding,” he claimed.

As she said in her own fiery floor speech on Thursday, Ocasio-Cortez had intended to let the incident go, but changed her mind when she heard the fake apology. After explicitly repeating the derogatory words Yoho had pretended were not meant for her on the floor of the House, she explained why they represent more than just a one-off insult:

Dehumanizing language is not new, and what we are seeing is that incidents like these are happening in a pattern. This is a pattern of an attitude towards women and dehumanization of others. So while I was not deeply hurt or offended by little comments that are made—when I was reflecting on this, I honestly thought that I was just going to pack it up and go home. It’s just another day, right? But then yesterday Rep. Yoho decided to come to the floor of the House of Representatives and make excuses for his behavior, and that I could not let go. I could not allow my nieces, I could not allow the little girls that I go home to, I could not allow victims of verbal abuse and worse to see that, to see that excuse and to see our Congress accept it as legitimate, and to accept it as an apology, and to accept silence as a form of acceptance. I could not allow that to stand, which is why I’m rising today to raise this point of personal privilege. And I do not need Rep. Yoho to apologize to me. Clearly, he does not want to. Clearly, when given the opportunity, he will not. And I will not stay up late at night waiting for an apology from a man who has no remorse over calling women and using abusive language towards women. But what I do have issue with is using women, “our wives and daughters,” as shields and excuses for poor behavior. Mr. Yoho mentioned that he has a wife and two daughters. I am two years younger than Mr. Yoho’s youngest daughter. I am someone’s daughter too. My father, thankfully, is not alive to see how Mr. Yoho treated his daughter. My mother got to see Mr. Yoho’s disrespect on the floor of this House towards me on television. And I am here because I have to show my parents that I am their daughter and that they did not raise me to accept abuse from men. Now, what I am here to say is that this harm that Mr. Yoho levied, tried to levy against me, was not just an incident directed at me. But when you do that to any woman, what Mr. Yoho did was give permission to other men to do that to his daughters. In using that language in front of the press, he gave permission to use that language against his wife, his daughters, women in his community, and I am here to stand up to say that is not acceptable.

The entire speech is worth watching here: 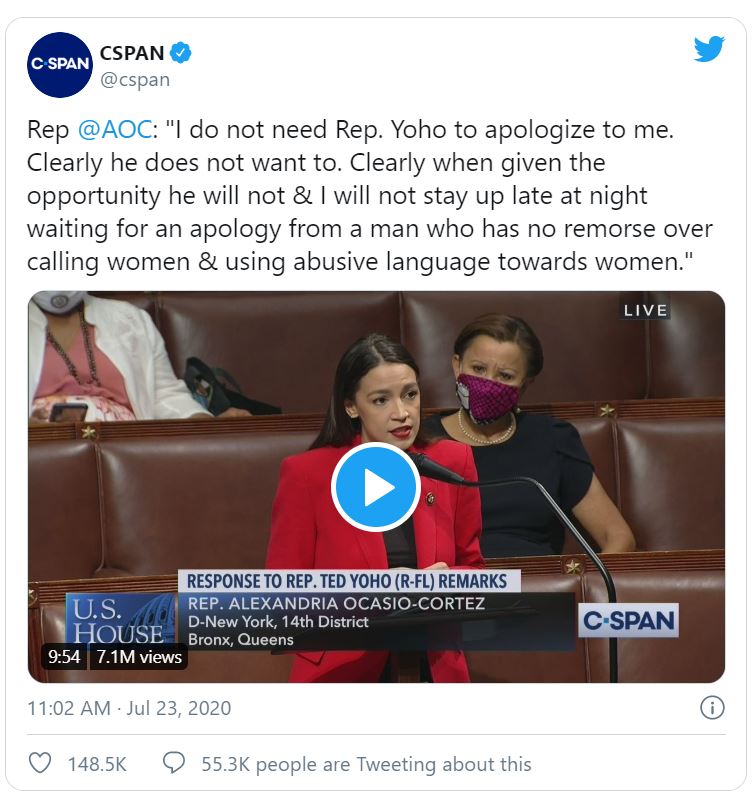 Beyond making a memorable point about casual misogyny, Ocasio-Cortez also created a very effective bit of political theater. The speech linked her political opponents directly to crudely sexist language, attitudes, and culture, which has been turning a critical swing-voting bloc of college-educated white women away from the Republican Party in droves.

In her speech, she explained that this sort of abuse was endemic in the Republican Party, citing several incidents. She noted that last year President Donald Trump told her and three other women of color serving in Congress to “go back” to the countries “from which they came,” making the racist statement that each congresswoman’s ethnic and racial background made her not actually American.

She pointed to the dehumanizing language used by Florida Gov. Ron DeSantis before she was sworn into Congress, when he said, “You look at this girl, Ocasio-Cortez or whatever she is.”

Ocasio-Cortez also called out other Republicans for condoning the insult with their silence. Williams, for example, later suggested to a reporter that he hadn’t heard Yoho’s outburst. “Not only did that colleague do nothing,” Ocasio-Cortez said. “He pretended he didn’t even hear it when he had in fact jumped in.” She also noted that neither House Minority Leader Kevin McCarthy nor any party official has publicly condemned the remarks.

“This should not be a partisan issue,” she said. “I have yet to see Republican colleagues standing up for their daughters and saying that this behavior was unacceptable.”

This is not a fight Republicans should be eager to invite. Hillary Clinton lost the 2016 election after losing suburban voters by 4 points and barely breaking 50 percent with college-educated white women. Currently, former Vice President Joe Biden leads both of these swing groups by significant margins. In a recent Washington Post poll, Biden led 60–36 among suburban women. In another recent Fox News poll, suburban women disapproved of Trump 67 to 33, and white women with a college degree disapproved of Trump 63 to 36. Among suburban women 54 percent strongly disapproved, and among white women with a college degree 57 percent strongly disapproved, of the president. These women broke for Biden 55–32 and 55–39, respectively, and were the groups most likely to say they were “extremely motivated” and “extremely likely” to vote in November, according to the Fox News survey.

The more that this key group of swing voters associates the abuses of the Trump era with the Republican Party and not just the president, the better chances down-ballot congressional and state Democrats have in the next election. Ocasio-Cortez understands this, and she has the power to turn such potential viral moments into political gold