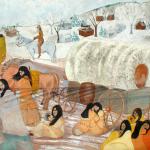 It may seem hard for some to imagine two more disparate subjects than the U.S. removal of Native American peoples from Indian territory in the nation’s Southeast during the 1830s and the Nazi liquidation of Europe’s Jews more than a hundred years later. Yet the parallels in the machinery of state expropriation, persecution, deportation, and violence that led to the expulsion of both groups from the lands ruled by their oppressors are striking.

To be sure, there were distinct differences: The U.S. was a populist democracy whose Indian policy was one of dispersal; the Third Reich was a militaristic dictatorship whose goal for the Jews was liquidation. The Americans were concerned with geography; the Germans with biology. But the nations’ methods for ridding themselves of their “alien” elements were remarkably similar.

It is no accident that Adolf Hitler used America’s policies to extirpate its Indian population as a model for his own extermination of the Jews. He equated his quest for Lebensraum in the East with America’s ethnic cleansing of its Indians in the West. In addressing the Jewish problem, the Fuhrer was inspired by America’s use of forced resettlement, starvation, deprivation and detention in expunging its own indigenous peoples. “The Volga must be our Mississippi,” he declared.The expulsion of Native Americans from their communities in the Southeast took place in less than a decade beginning in 1830. As Claudio Saunt’s new history, Unworthy Republic: The Dispossession of Native Americans and the Road to Indian Territory, recounts, the first half was relatively benign, devoted to prodding the Indians to “relocate” through legal chicanery and settler intimidation, warning that it was in their interests to move on before they were forced out. When this failed, the second half was informed by violence, plunder and roundups—all done by or with the sanction of the government. The indigenous peoples involved—the Cherokees, Creeks, Choctaws and Chickasaws residing within a territory bounded roughly by present-day Georgia, Alabama and Mississippi—cited treaties to no avail.

Although Chief Justice John Marshall upheld their rights in the Supreme Court, his 1832 ruling in Worcester v. Georgia was only so much paper, as President Andrew Jackson declined to enforce it. In 1830, Donald Trump’s favorite president had approved “the Act to provide for an exchange of lands with the Indians,” in effect a euphemism for mass deportation in the guise of paternalistic concern for the well-being of the despoiled Native Americans. The government based its expropriation on a bogus accord manipulated with the collusion of a rump group that had broken with the Cherokee nation.

The “Trail of Tears”—which refers to the removal of 80,000 Indians from their homelands—actually comprised a series of expulsions over several years. As Saunt writes of one of these actions: “The four thousand children, women and men who walked to the Mississippi in November 1831 left behind their land, their houses, corncribs, farming implements, orchards and livestock.” By way of compensation, “95 percent of the dispossessed received nothing.” In fact, they were made to pay for their own deportation. The Southern usurpers partnered with Northern backers who profited richly from the process of Indian removal.

When Hitler made the Jews pay for cleaning up the damage inflicted by the Nazis after Kristallnacht, he had a ready precedent. While the Germans took malicious pleasure in tormenting their Jews, the Americans affected a concern for the Indians’ well-being. Since these  “primitive” people could not long survive alongside the flood of “civilized” white settlers who were inexorably usurping their lands, the only way to protect them from their inevitable fate was to remove them. The stark choice, they were advised, was expulsion or extirpation.

Acceding to the legalism that Bill of Rights protections were limited only to the actions of the federal government and not the states, Jackson allowed Georgia and its rapacious plantation-politicians to have a free hand in dispossessing the Cherokee Nation of more than four million acres of its ancestral lands despite the guarantees of a U.S. treaty now in tatters. Like the Jews of the Reich, the Cherokees were deprived of their legal status and effectively impoverished by writ of law. When sympathetic Northern congressmen vainly sought to thwart this process, legislators from Georgia took umbrage, threatening to nullify any federal efforts to impede them and, if necessary, to secede, a threat that proved unnecessary.The fate of the Cherokees and their kindred folk was part of a larger plan to drive all of America’s indigenous people’s west of the Mississippi, an early paradigm for the German project to make the Reich judenrein. Both were virtually successful. By the mid-1830s only 15,000 of the original 80,000 indigenous people remained on their native soil and, after spates of vigilante violence, they’d soon by removed at bayonet point to internment camps from whence they would be marched west under armed guard.

The land that they’d been given in “compensation” for their fertile valleys was a bleak terrain in what would become the Oklahoma territory. At the time it was described by one Army officer as “nothing but a barren waste, having no cultivable lands, no game, no timber.” One thinks of the stateless Jews a century later who were dumped by Germany over the Polish border to languish in a frontier no-man’s land.

The trail west was marked by privation, disease and death. The Government’s ill-provisioned commissaries, rife with corruption, negligence and ineptitude, could not provide for the needs of the starving, ragged, ill-shod refugees who marched hundreds of miles through freezing weather, succumbing to cholera, exposure and malnutrition that took a particular heavy toll on the young and the weak. The refugees’ route would take many of them a few miles past the Hermitage, Andrew Jackson’s thousand-acre plantation which held more than 100 slaves.

A contingent of ravaged Choctaws reached Memphis and Vicksburg during the worst winter storm in 50 years. From there they were packed into steamboats described as “floating prisons.” The last leg of their ordeal was resumed on foot until the exhausted survivors arrived at their destination. There is an eerie similarity between the sufferings endured along this fatal route and the death marches described by the Jewish survivors as the Reich imploded.

Meanwhile, the white usurpers were making good use of plundered Indian land. Georgia conducted a state lottery in which 53,000 winners got to stake their claims to more than 4.2 million acres of Cherokee land, replacing the Indians with Black slaves to work the fields of cotton and other staples. There was a direct link between depopulating the region of Indians and refilling it with Black slave labor. Abolitionists pointed to the connection between plantation slavery and the deportation of native peoples, which they decried as “doubly atrocious.”It is here that we arrive at a common thread in the destruction of a vulnerable minority, often unremarked on because it is hidden in plain sight: avarice. While the oppressors justified their depredations with various rationales—manifest destiny to dispense with the Indians, racial purity in regard to the Jews, security and ethnic cleansing in the case of the Armenians—a prime motivator in all these instances is a generalized envy of a minority possessed of property, wealth or status. When a sufficient animus has built up, the resentful majority will use whatever occasion arises—war, economic crisis, foreign threat—to plunder its prey.

By 1830, Cherokees lived on homesteads, went to church, published newspapers and lived alongside whites in conditions of relative prosperity. They were a diverse community, in Saunt’s words, “hunters, farmers, Catholics, Methodists, animists,” and, like their white neighbors, a few were slaveholders as well. But in the envious eyes of the white newcomers their assimilation was of no avail—they were still defined by race. As the Cherokee leader John Ross observed, if his people were suffering it was not because of their proximity to settlers but rather due to the policies of white men “when dictated by avarice and cupidity.”

Step 5: Physical destruction, was a bridge too far in America, although a case might be made that the annihilation of millions of indigenous people over the centuries by white invaders could amount to genocide.

Aly also observes that “by distributing the belongings and property of Jewish deportees among local gentiles, the German masters made the latter complicit in their crimes, ensuring their silence.” Consequently, when the war ended, many “were shocked when unexpected and unwanted Jews suddenly appeared.” Needless to say, wherever the Jews materialized, they were rebuffed with lies, resentment and violence. The desire of millions of Europeans to retain their ill-gotten gains led them to deny their complicity.

Which brings us back to what Gore Vidal called “the United States of Amnesia.” A generation after World War II, the Germans made an accounting with the past. A generation after the Civil War, the heirs of the Confederacy justified the rebellion with monuments and whitewashed its embrace of slavery from the picture.

While a reckoning with the history of slavery is now belatedly coming to pass, we have yet to establish a reconciliation commission to address the despoliation of our Native Americans, which would be part of a larger undertaking to deal with this country’s blemished record in treating its Asian minorities, much less the legacy of Black servitude and its consequences.

Saunt writes that in 1824, prior to the Native American expulsion, Cherokee leaders had demanded their rights “under the memorable declaration that all men are created equal; that they are endowed by their Creator with certain inalienable rights.” They were attempting to hold America to its own words and to appeal to the conscience of a burgeoning nation.

Their effort failed but in making it, they showed a better sense of our national purpose than the men who spurned them. It is now for history to hold a reckoning with their cause.

Jack Schwartz was a former book editor of Newsday and is the author of The Fine Print: My Life as a Deskman.