Community fridges show up in L.A. neighborhoods to feed those in need 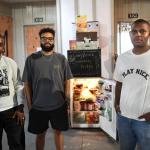 In Mid-City, a refrigerator stands on the sidewalk outside Little Amsterdam coffee shop. This is no ordinary sidewalk fridge — dank and empty, waiting to be picked up by sanitation services — but a community fridge: cold, clean and well-stocked with food.

Behind its frosty glass door is a wheel of Cacique queso fresco, a carton of eggs, squash, kale, Lunchables and half a gallon of milk. On its side, there’s a mural of a young man eating an apple, the words “Eat to Live” etched into his curly cropped hair.

The fridge, hosted by 40-year-old Little Amsterdam owner Joshua Mock, is part of a growing mutual aid network called Los Angeles Community Fridges that assists in setting up community-run, free-food fridges across the city, and offers resources and tips for people to do so themselves. These refrigerators are hosted and sustained by businesses, organizations and individuals, and supported through the network of more than 60 organizers across Los Angeles.

Inspired by similar efforts in New York City, including by the activist collective A New World in Our Hearts, the idea is to empower communities, feed people and eliminate food waste.

“Food scarcity is a myth, and our communities deserve to be fed,” said Julia Lebow, a 25-year-old organizer with L.A. Community Fridges.

Unlike more traditional forms of food aid, there are no forms to fill out, and no limit on how much food people can take or how often they can take it; the fridges are anonymous; their light is on 24/7; and they’re not being policed or regulated by anyone.

This is an important distinction for many people who are food insecure, said Marina Vergara, a 31-year-old organizer with L.A. Community Fridges and head of operations at Reach for the Top, an organization that offers transitional housing for the chronically unhoused, along with food distribution services. Reach for the Top was the first to host an L.A. community fridge at its housing unit in Mid-City. It was set up on July 6, with a second one (which has now been moved to South L.A.) put in on July 7.

“A lot of people don’t seek out aid because of their [immigration] status,” she said. “There’s no doubt in my mind.”

Vergara said there was another reason why people might feel more comfortable taking food from the refrigerators instead of more traditional sources of aid: “There’s so much pride that people have, and seeking assistance strips that away.”

Organizers have been growing the network for weeks now. But since the effort materialized on Instagram on July 3, community fridges have sprouted in Highland Park, South L.A., Long Beach, Exposition Park, Arlington Heights and in Mid-City.

Most of them are brightly painted and hard to miss, with “Free food” or “Take what you need, leave what you don’t” in English and Spanish.

The organizers insist it’s not charity — something they say can be perceived as belittling for those on the receiving end — but mutual aid.

“Mutual aid emphasizes this is from the community,” said Ian Cohen, another 25-year-old organizer with the network. “We aren’t gifting anything. We’re just putting resources where they need to go, because those resources are available. The issue is just getting them efficiently distributed.”

The fridges are found mostly for free on Craigslist, and their transportation is handled by people within the network who have trucks. The food has come from supermarkets, food pantries, meal services, people’s homes and gardens, and sometimes restaurants.

It’s an effort that’s timely, with the coronavirus pandemic exacerbating poverty and food insecurity, causing large numbers of residents in L.A. County to lose their jobs and the number of families seeking food aid to shoot up exponentially. The recent protests over the death of George Floyd in Minneapolis police custody also engendered a spirit of helping people.

“This is a really special moment because of coronavirus and because of this moment of upheaval and revolution,” said organizer Lebow. “I think a lot of people are really looking for a way to be involved and better their communities in particular.”

Ryan Hoyle is the 28-year-old co-owner and founder of Play Nice LBC, a retail shop that doubles as a gallery and community space. When he saw the L.A. Community Fridges Instagram pop up on his feed in early July, he offered his storefront as a power source.

Play Nice is a haven for young Black and brown people in an area that’s becoming increasingly gentrified.

“This is an area that could really use that help,” Hoyle said.

After making contact with Hoyle, the L.A. Community Fridges network dropped off a fridge in Long Beach on Thursday evening. By Friday afternoon, Hoyle and his team had cleaned, painted and stocked the refrigerator with food. By Saturday, so many contributions had come in that the fridge was overflowing.

Meanwhile, on Saturday in Exposition Park, South L.A. artist Fawlene Copeland, 26, was tapped to paint one of the newest community fridges to join the network, dropped off by organizers earlier that day in front of Revolutionario North African Tacos.

Also over the weekend, a Highland Park fridge hosted by Pair O Dice Giftshop was settling into its new home on a stretch of Figueroa Street. Behind its door, painted in warm, inviting earth tones, were packets of Abuelita hot chocolate, cartons of whole milk and almond milk and seasonal stone fruit. Someone had set up a mini-pantry on the side of it that was stacked with dried goods.

Even before the pandemic hit, the L.A. Food Bank was clocking the number of food-insecure people in the city at 2 million. Vergara believes that the current model in place to serve such populations is broken.

“There are a lot of issues,” she said. “Whether that be having to go to a food bank, or a weekly distribution event, because there are a lot of people who don’t have reliable transportation. That’s a huge obstacle for a lot of the people that I know, who are mostly undocumented.”

Not to mention people who are experiencing homelessness or who have mental or physical disabilities. Vergara said that that putting the fridges directly into the community can serve an even broader population of people, including those who might be overlooked by traditional forms of aid.

Back in Mid-City on a quiet residential street, the two fridges that started it all, painted in Day-Glo orange and lime green, pique the curiosity of passersby. The orange one depicts on its door a fist raised in protest holding a stalk of celery. The words “Comida Gratis” are bannered across the freezer. Free food. (The lime green fridge is now in South L.A.)

Emilia Shaffer-Del Valle, 26, showed up lugging a box of produce after doing her weekly shopping at Wellington Square Farmers Market. Farmers donated the vegetables after she told them about her new neighborhood fridge. They offered to start doing so every Sunday.

“I know the need,” she said, “I just want to make sure communities’ histories and cultures and livelihoods are not erased.”

For her, and the other people involved in the project, food is one way of ensuring that.