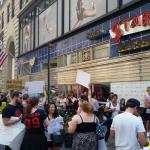 Imagine the scene. On a busy Saturday evening, customers are in line to go into an iconic New York restaurant, often waiting for more than 15 minutes. Only several feet away are fired workers asking and pleading with them to go elsewhere. The workers chant and hand out flyers. They tell their stories of how they were fired for organizing. Only a handful of folks in line change their minds after hearing about what is happening.

This was the scene at Ellen’s Stardust Diner in New York City in 2016. After servers organized a union, Stardust Family United, with the IWW, the owner hired a union-busting lawyer and eventually fired over 30 workers, including many of the leaders. The union carried on, organizing new hires, and eventually won the fired workers’ reinstatement. It has since successfully organized with direct actions around a number of their demands on the job, including health and safety issues.

The workers won their campaign because of their own organizing, and seemingly not because of any meaningful loss of customer business. At most of the dozen or so protests I attended, the picket line was not that effective with customers — and this in spite of the protests being among the most compelling I’ve ever seen. Since the workers sing popular songs while serving customers at work, and many also have careers as professional performers, they would perform for the crowd outside. I developed a renewed love for We’re Not Gonna Take It, and amazingly, new respect for We Built This City. And yet most customers still went in.

Yet it strikes me as amazing that most people seemed unmoved by what appeared to be a simple ask: just go to another restaurant. This really could not have been easier — picketers handed out flyers with directions to similar restaurants nearby.  Of course Stardust Diner is a unique destination and some tourists were looking forward to visiting as part of their night out at a Broadway theatre. Whatever these personal considerations, they clearly outweighed an urgent and compelling plea for support by people right in front of them who were fighting for their jobs.

Often during labor disputes we have pickets or protests asking customers for some kind of support, including to honor a boycott. Over the years I have assisted many campaigns that have involved workers and allies standing in front of a restaurant or store, often for many months. Sometimes we asked customers to boycott, other times we wanted customers to contact the manager, or we were just trying to annoy the boss, or maybe a mixture of these. From what I have seen and read, success is mixed.

Some other examples from the last decade include a restaurant in my neighborhood, Saigon Grill, which had a multi-million dollar wage theft case involving dozens of delivery workers. Years of protests by the workers and supporters tried to keep customers out. Eventually the restaurant closed, which we viewed as some kind of victory, but it’s not clear to me if the workers ever got all their money.

Another campaign involved supporting the workers organizing a union at the Golden Farm grocery store in Brooklyn. Almost two years of off-and-on effort to convince customers to go elsewhere, in protest of the company’s union busting, resulted in a possibly 20% loss of sales. The campaign successfully ended with a new union contract.

How should we understand boycotts?

Monroe Friedman in Consumer Boycotts, his history and analysis of boycott campaigns (I counted 30 different boycott classifications), discusses the labor boycott strategy. It developed in the late 1800s with the Knights of Labor and was then taken up by the American Federation of Labor. The main idea is that employers depend on production and consumption, and strikes target production while boycotts target consumption. He calls boycotts the “labor weapon of last resort,” since they were often used when strikes were failing. Unions concluded that if they couldn’t stop production, they’d try to stop consumption.

Boycotts have also had a contested early legal history, often opposed by employers with injunctions and lawsuits. Most famously, the Taft-Hartley bill of 1947 made “secondary boycotts” more difficult. Unions since then have had more restrictions when protesting other employers that deal with the primary employer where the labor dispute is located.

Probably the most famous boycott campaign in U.S. history is the United Farm Workers national grape boycott. The UFW’s strike at many California grape farms was weakened by enough successful scabbing, so the union set up a vast boycott campaign in dozens of cities in the late 1960s. Protests in front of grocery stores moved many major chains to stop carrying grapes. Friedman states that UFW organizers claimed a one-third drop in grape sales in the major cities they targeted. The union won that historic campaign, and I think by all accounts the boycott was essential.

Friedman makes an interesting classification of boycotts into beneficiary (organized by those whom the boycott is intended to help – “boycott to help us”) and conscience (organized on behalf of others – “boycott to help them”) campaigns. He thinks that conscience campaigns have generally been more successful, since customers may see beneficiary boycotts merely as self-interested calls by workers to “take their side” in a labor dispute. Boycotters thus may try to frame boycotts more broadly as benefiting the general public (we’re fighting for good jobs) or good for consumers (better treated workers produce better products or services).

Friedman also raises a related issue of how the boycott subject is framed. He states that boycotts on behalf of obviously exploited, unorganized workers, such as farmworkers, have more often been successful. Thus boycotters may emphasize misery and exploitation, however, this can perhaps go too far when campaigns choose to depict workers sympathetically as weak victims needing help, rather than potentially strong workers seeking allies in struggle.  Since we want to build the capacity and confidence of workers to organize, and ultimately run their workplaces, a victim framework undermines that. The challenge is to frame a particular workers’ struggle as inherently in the general interest, as part of the wider and necessary class struggle.

This got me thinking about the factors that could contribute to support or lack of support for pickets or boycott campaigns. Certainly the decline of union membership in the U.S. matters. In the 1950s about one-third of all workers were union members, whereas today it’s about 10%. In the 1950s there were hundreds of large strikes per year, while today there may be dozens or less. Union organizing, protesting, striking, bargaining and boycotting back then were much more familiar to people.

Union Density over Time (percentage of workers in unions) 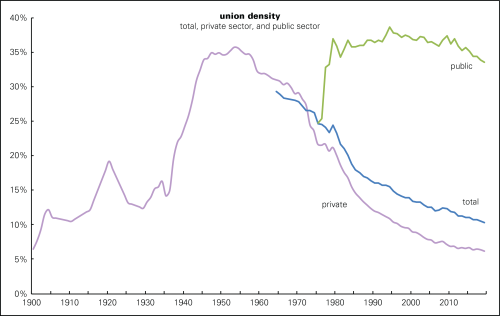 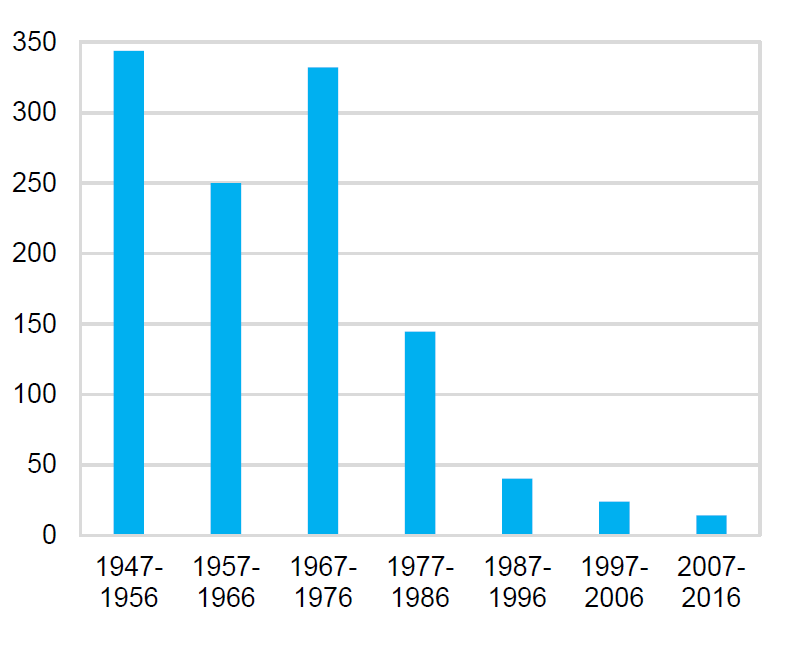 Along with this decreasing union membership and strike activity is a long-term decline in the approval of unions, with a more than 20% drop from the 1950s to the 2000s, though it has been trending back up in the last decade.  This poll also tracks the decreasing number of people from union households.  In the 1950s likely well over half of workers would be in a union household, but today it’s only 14%.

The mass media situation matters as well since this is where most people hear about union strikes or boycotts. While unions do get some positive press — for example, the Stardust campaign had many decent articles — a lot of mainstream coverage of labor issues is unsympathetic and superficial, and there’s simply not much of it. The decline of labor reporters at major newspapers, along with independent labor and left publications, is well known. With little personal connection to the labor movement, the occasional media story is really the only way most people will ever understand what a strike, boycott or protest is about. Luckily, recent years have seen the growth of more good labor reporting, including at this website.

The UFW’s grape campaign occurred in an era of high union membership, striking, and approval, and I assume it’s no coincidence that their boycott received a lot of support as well. But overall, these days fewer people are in a union, are related to someone in a union, or are friends with anyone in a union. Very few people have ever been on strike, participated in a union picket or possibly ever encountered one in person. Rarely do they read a good news story or see a decent TV news report about a union struggle.

The historically rich and dynamic union culture of solidarity – organizing, strikes, picket lines, protests, marches, parades, boycotts, social events – was more prevalent decades ago. It served to educate and organize support for picket lines and boycotts. But this is just not real for many people now and has to be recreated. And hopefully it will be recreated when the labor movement grows again.

Complementing worker organizing, or substituting for it?

We want to build workers’ power, so developing a solid workers’ organization is always the priority. A union that can organize effectively on the shop floor is also the best way to win campaigns, whether through striking or other direct actions. That is after all why Stardust Family United prevailed.

However, there may be times when other tactics are necessary, and a customer boycott can be a part of that. This also gives supporters outside the shop a way to help the campaign and also hopefully just annoys the boss.

But if we’re honest, we’ll admit that it’s most necessary when shop-floor worker organizing is weak. Take the example of wage theft campaigns. They often involve workers who were either fired or quit their job. So in the worst case the campaign becomes ex-workers and supporters outside waging a boycott with little to no visible worker support or activity on the job. These can be depressing campaigns and I hate to see this dynamic happen. But we also need to win them and don’t want to rely on slow and inadequate state enforcement.

Sometimes, these can drift into what Friedman calls a media-oriented boycott, where the goal is to “name and shame” the employer in the media. Maybe that’s fine, but we shouldn’t overstate the impact of bad press — some bosses just don’t care as long as sales look fine. If we’re relying solely on customer boycotts and media trashing to win these campaigns, we should be prepared for a long slog.

Friedman points out that there is also a danger of campaigns devolving into an expressive boycott, which is ineffective but carries on because boycotters want to express their frustration and anger at the target. We can see how a customer boycott strategy can move away from the original objective and take on a zombie life of its own.

So we recognize, as Friedman mentions, that boycotts and other campaign tactics often arise out of desperation when the shop floor organizing or strike is failing. These campaigns can still be “won,” but this raises concerns about what kind of worker organization will be left behind, if any, when the campaign is over. Since building strong worker organizations is what this is supposed to be all about, the tough answer may be to take the time to revitalize worker organizing.