The Corporation, Law, and Capitalism 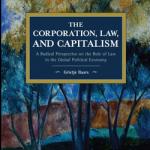 The Corporation, Law, and Capitalism
A Radical Perspective on the Role of Law in the Global Political Economy
Grietje Baars
Haymarket Books
ISBN: 9781642591873

Grietje Baars’s monumental – nearly 500 pages – work, The Corporation, Law, and Capitalism is now published in paperback at a reasonable price. This reviewer hopes that readers will delve into her passionately and clearly written engagement not only with the corporation as the engine of capitalism, but with law itself.

Baars’s call to action is comprehensive, drawn from Marx’s On the Jewish Question: ‘Our resistance must turn against the concept of private property, against capitalism and against law: away from legal emancipation and toward human emancipation.’ (379) Baars is against ‘cause-lawyering’, and attempts to hold corporations criminally liable. For her, such activism and critique inadvertently strengthens and creates value for capitalism. She supports her arguments with a wide range of scholarship.

Baars is well qualified for such an undertaking. She started as a commercial solicitor, and studied for her PhD under Catherine Redgwell at UCL, from 2004 to 2012. The book was conceived in 2009. Baars was then an in-house lawyer at Habitat, which enabled her ‘to understand the real-life effects of the intricacies of global corporate group structures as well as the relationship between human rights, contract law and international production chains’. (xiii) Her life changed dramatically when she spent time in the Occupied Palestinian Territories, and participated in international conferences on the enforcement of International Humanitarian Law there.

It was while she was in Palestine that, in her words, her ‘mind was blown’ reading China Miéville’s 2006  Between Equal Rights: A Marxist Theory of International Law. She was converted to the ‘commodity form theory of law’ of Yevgeniy Pashukanis, the most interesting Soviet theorist of law, and his Law and Marxism: A General Theory (1924). This is the theoretical heart of Baars’s The Corporation, Law, and Capitalism.

She also spent time with the European Centre for Constitutional and Human Rights (ECCHR) in Berlin, cause lawyers par excellence. Using litigation, it tries to hold state and non-state actors responsible for egregious abuses. Corporations have been particular targets. Baars respects the work of ECCHR, but in her view it is counter-productive, it achieves the opposite of what it intends.

Baars starts by setting out her theoretical framework. This is entitled ‘Introduction: ‘Das Kapital, das immer dahinter steckt’, which means, literally, she says, ‘the capital that always lurks behind it’. She helpfully adds in a footnote: “I owe this phrase to Fabian Schellhaas, who used it in his presentation in March 2010 at Prof. Werle’s Doktorandenseminar at the Humboldt University of Berlin.” To which one can only respond “Gott hilf mir!” Thankfully, Baars has few such impenetrable asides, though this is on p. 1.

After this, the structure and contents of the book are as follows. Baars has four chapters, and a short conclusion which is also a substantive chapter, on ‘Corporate Imperialism’.

Chapter 2 is much longer than the Introduction, over 100 pages, and is ambitiously entitled “The Roots, Development, and Context of the Legal Concept of the Corporation: the making of a Structure of Irresponsibility and a Tool of Imperialism”. This is the chapter in which Baars presents her substantive and very interesting research on law and on the Corporation.

Chapter 3 is about the same length, and at first glance has not much to do with the theory of the corporation or of law. It is entitled ‘Capitalism’s Victors’ Justice? The Economics of World War Two, the Allies’ Trials of the German Industrialists and their Treatment of the Japanese Zaibatsu’, with two sections, on the Nuremburg and Tokyo International Military Tribunals respectively. Baars’s purpose in this chapter is primarily to criticise individual criminal responsibility, and, in passing, the evident failure of the allies to prosecutes the German corporations. This chapter is also the fruit of meticulous research.

Chapter 4 is rather shorter, and is entitled ‘Remaking ICL: Removing Businessmen and Inserting Legal Persons as Subjects’. It is divided into three sections. 4A is “The Remaking of ICL: Lawyers Congealing Capitalism”. I will return to this innovative transitive use of “congeal”. 4B is “ ‘No Soul to Damn and No Body to Kick’? Attribution, Perpetration and Mens Rea in Business”, and 4C is “Re-making ICL: Who wants to be an International Criminal? Casting Business in Contemporary ICL”. This again is Baars’s critique of international criminal law, rather than corporations.

Chapter 5 is much shorter, less than half the length of the first two substantive chapters, and also has an interesting title ‘Contemporary Schreibtischtäter: Drinking from the Poisoned Chalice’. This chapter has a strong doctrinal focus on the International Criminal Tribunals for Yugoslavia and Rwanda, the Special Court for Sierra Leone, and the International Criminal Court itself. Baars tells us that ‘Schreibtischtäter’ can be translated ‘desk murderers’, ‘… carrying out the seemingly innocuous tasks that lead or contribute to ‘physical’ crimes at some distance removed from the office.’ (309)

This unusual structure, with two chapters of over 100 words, one of almost 70, and three of something over 30, is somewhat reminiscent of the Holy Qu’ran, in which the chapters are organised in order of decreasing length.

As to the theoretical basis of the book, Baars states that ‘I use a Marxist theoretical framework and method.’ Baars wants to define the nature of capitalist law, where it came from ‘and how and why it was created or why law specifically was selected as opposed to other forms of social organisation’. (9) However, the notion that law under capitalism was created or selected (by whom?) seems rather un-Marxist. Laws have been around since at least the Babylonian Code of Hammurabi in about 1754 BC. Most Marxists, especially adherents to ‘historical materialism’, insist that the laws of a social order, such as capitalism, are rooted in material conditions (forces of production), and production relations. Elsewhere in the text, Baars is much closer to such a conception.

The ‘commodity form theory of law’ (CFTL) as put forward by Pashukanis in 1924 and applied to international law by Miéville in 2004, says Baars, ‘provides a clear and persuasive explanation of where law comes from and why it (was) developed’ (10). She adds that employing this theory enables her to show that the corporation ‘came from somewhere’. (11) She claims that in her book ‘for the first time the [CFTL] has been applied in a sustained way to a specific societal problem.’ (14) She briefly outlines CFTL in just a little over two pages (16-18), which does not enable her to do justice to the complexity of Pashukanis’s thought, or to its critics. Nevertheless, she highlights her own advances: ‘Without departing from the main tenets of the [CFTL], I adjust a number of Miéville’s parameters to better fit some aspects of Marxist theory and the questions I seek to answer’ (18). These adjustments are threefold: first, her notion of ‘law’ rather than Miéville’s distinction between national and international law; second, the concept of global classes rather than Miéville’s emphasis on the international state-system; and third, her foregrounding of imperialist economic violence ‘perpetrated and participated in by the various types of members of the global capitalist class rather than inter-state war per se.’ (19)

Baars has two notable theoretical innovations of interest to Marxists, the first of which I have already mentioned is her transitive use of the word ‘congeal’. For her, law ‘congeals’ capitalism. The second is her notion of ‘canned morality’. Both make regular appearances from the beginning to the end of the book.

The word ‘congeal’ is employed by Baars in a number of different ways as the book progresses. First, it is said that ‘law congeals capitalism’, which means that the form and content of law are determined by the mode of production. She adds: ‘Whatever material relations exist, we design law, or law functions, so as to confirm, support, congeal or concretise them.’ Further, the work of legal scholars is ‘…the dialectical process of law(yers) congealing capitalism’. (26) The next section is headed ‘Lawyers Congealing Capitalism: Who Constructs the Structure?’. (Ibid)  Baars subsequently adds: ‘…lawyers, through law, congeal capitalism. I deliberately use the verb to congeal incorrectly here, to emphasise the hidden agency behind a process that seems ‘natural’. (28)

In Chapter 2 Baars starts by referring to our failure to see law as the ‘congealing’ of property relations. She links her own concept to Marx’s ‘commodity fetishism’ and to the ‘congealing of the corporate purpose of profit extraction in the 1844 [Joint Stock Companies] Act’ (69). She continues that the corporation is a ‘structure of irresponsibility’ which is ‘capitalism congealed’ (74), and adds that ideological forms ‘congeal’ the state and the corporation. (92)

Leaving Corporations as such behind, Baars turns to the Nuremburg International Military Tribunal. She explains why it was not a failure: ‘by producing capitalism’s victor’s justice it played an important part in this process of further congealing capitalism and institutionalising international law.’ (198)  It was ‘members of the (literal) ruling elite congealing capitalism’.  Indeed, she says, ‘… lawyers’ construction of ICL (International Criminal Law) ideology serves partly to congeal ICL’s fluidity…’. (240) Later in the chapter, Baars again emphasises the role of lawyers, whose ‘congealing serves to further rationalise criminal justice policy’ (266). She asks whether if the International Criminal Court regime were to congeal into Customary International Law, it would be less useful for capturing corporate actors. (274) Finally, she writes that ‘ICL thus forms an integral part of the structure of rules congealing the economically exploitative relationships between the GCC (Global Capitalist Class) and the GWC (Global Working Class).’ (341) This last use of the word ‘congeal’ is rather opaque.

To turn to ‘canned morality’, this is introduced as a feature of International Criminal Law (12). Baars explains: ‘Criminal law, more than any other area of law, functions as society’s ‘moral guide’ and is thus a powerful ideological tool that can be deployed at opportune political moments in the service of capitalism, as ‘canned morality’. (23) The International Military Tribunals after WWII were, she says, a display of ‘canned morality’ which ‘served the prevailing mode of production by allowing ‘liberal lawyers’ to express their individual humanitarianism and through this to construct the ideological ‘play’ of the trials, while simultaneously creating a ‘diversion’ for far-reaching economic intervention.’ (134)

Baars reveals ‘An Alternative Foundational Narrative for ICL’. Her sub-heading ‘Canned Morality: a Commodity Form Theory of ICL’ reveals the ambition of her innovation. This is commodified morality, producing ‘accountability’ in the Weberian sense, so that commodified morality can be deployed to control and optimise public sentiment. It unites us with the state against the accused, and away from the structural questions. ‘This is what ICL is for’, she declares (263). The ICL industry, she says, produces canned morality to divert our attention from the structural causes of conflict (308). Later, she explains that ‘corporate accountability thus equals ‘commodified (and canned) morality’ or ‘moral’ behaviour with a clear economic benefit.’ (359) She adds that ‘… canned morality is as far away from democracy as we can get.’ (374) Canned morality also makes its appearance in the impassioned final pages of the book, where Baars inveighs against cause lawyering, and legal emancipation.

The reader must judge for themselves whether Baars has achieved a significant development of Marxist theory, and whether her reading of CFTL bears the weight she wishes to place on it, in particular ‘canned morality’ as the ‘commodity form theory of International Criminal Law’. But there can be no doubting the passion and scholarship, especially concerning the corporation itself and its history, and the development of ICL, which are to be found on every page of The Corporation, Law, and Capitalism. The book is indeed a rewarding if lengthy read.