How to Save the World from Financialization 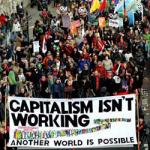 Since the 1980s, the United States and England have embraced an economic model known as “financialization” in which the financial sector has accumulated vast control over the economy and politics.

This shift has led to the greatest inequality since the Great Depression, a decline of unions, growing household and corporate debt, austere public policies, distorted economic growth and an uncertain future for our children.

Our economic life is no longer focused on job creation, bargaining over wages and the production of goods and services. Instead, today’s economic priorities are maximizing shareholder value, investing in financial markets, profit maximalization and monopolization through mergers and acquisitions.

The financial sector’s increasing grip on the economy is the subject of “Stolen: How to Save the World from Financialization” by Grace Blakeley, a research fellow at the London-based Institute of Public Policy Research.

The 316-page book explores how financialization emerged after the breakdown of post-World War II consensus and the resulting economic devastation, weakening of democracy, assault on the public sector, globalization, and financial instability. While she paints a gloomy picture of our society, Blakeley argues that the economic stagnation and political polarization accompanying financialization creates an opportunity for progressives to fight for a democratic socialist alternative—and win.

So, did we get here?

The Bretton Woods system—the global financial rules governing the post-World War II era—collapsed when President Nixon decided to delink the U.S. dollar, the world’s de facto currency, from gold. The action came as the growth of multinational corporations and the Eurodollar market put tremendous strain on the international monetary architecture. The change opened the door to the financial sector to dominate the economy. Neoliberalism emerged as the prevailing ideology.

In England, Prime Minster Maggie Thatcher’s agenda targeted trade unions and aimed to shrink the state. Politically, she counted on popular support by promoting homeownership. She also encouraged “pension fund capitalism,” which created a class of “min-capitalists” and provided a windfall for financial institutional investors.

The rise of the ideology of shareholder value transformed corporate practices and philosophy, Blakeley says. Profits now were earmarked to line the pockets of shareholders and executives at the expense of worker wages and productive investment.

Significantly, this meant the end of the shared prosperity of the post-World War II era: The link between productivity increases and pay increases was severed, ushering in decades of a redistribution of income to the wealthy and corporations from ordinary workers.

In the United States, the decoupling of productivity and wages led to a loss of $18,000 for the middle 60 percent of U.S. households, between 1989 and 2007, the year before the Great Recession. Between 1972 and 2016, as a percentage of the total assets of publicly traded companies, shareholder payouts rose 3.1 percent while wages dropped 11.4 percent, according to the Roosevelt Institute.

Beyond the gross disparity of income and wealth that now characterizes our society, financialization has brought about a number of other disturbing developments that have made our economic and political lives more precarious.

· The Emergence of “Bond Vigilantes”: Today, giant institutional investors wield enormous power. They are able to undermine, even bring down countries as they demand debt payments funded by service cuts. They are behind the economic wreckage in Puerto Rico.

· Privatization and the Shrinking the State: Outsourcing of public services has undermined unions, weakened civil service, and allowed private companies to profit from taxpayer money while providing shoddy services to the poor.

· An Attack on the Safety Net: Reining in public services is a key plank of the neoliberal agenda and has taken a heavy human toll.

Austerity measures introduced during the debt crisis in Greece devastated the county. Over 50 percent of young adults were unemployed during the height of the crisis in 2013.  HIV/AIDS incidence doubled between 2010 and 2012 when the government temporarily stopped distributing syringes. Mortality worsened with the death rate increasing from 944.5 per 100,000 in 2000 to 1174.9 in 2016.

In the United Kingdom, a 2017 study linked 120,000 deaths in recent year to government programs

· Boom and Bust: The dot-com crisis and the Great Recession are symptoms of the instability resulting from the financialization of the economy. There’s little reason to believe the system will cure itself.

But despite the growing power of the rentier (monied) class, banks and corporations, Blakeley is hopeful about the possibility of change. She argues that the economic and political landscape has created favorable conditions for a dramatic, progressive shift toward democratic socialism.

“For decades we have allowed our futures to be determined by the wealthy and the powerful in the hope that they would use their influence for the good of the whole,” Blakeley writes.

“But the financial crisis exposed many of our political and business leaders for what they are: self-interested, exploitative, and reckless elites, who would rather see the planet burn than sacrifice an iota of their wealth. It is now clear that the only power we can rely on is our own.”

Blakeley’s message to progressive Americans clear: Don’t squander what appears to be looking like Democratic tsunami in the November national elections.

[Labor journalist and Portside Labor moderator Gregory N. Heires is a blogger at www.thenewcrossroads.com. He is the former president of the Metro NY Labor Communication Council.]