The Labour Left and ‘The Long March Through the Institutions’ 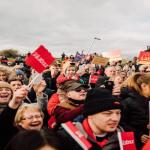 It’s been clear since December 2019 that the UK left is in crisis. Localised, precarious struggles – from mutual aid efforts to meet the needs of daily life to a reviving trade unionism – have been met with no wider amplification from the Labour Party leadership. Under Corbyn and McDonnell, our involvement in workplace and community campaigns was arguably strengthened by membership of the Labour Party. Now this relationship is once again open to question.

It is necessary for the future of the left that we have an open, thoughtful , comradely debate on what this relationship should be going forward. Red Pepper, coming as it does from social movements and labour struggles as well as from the radical Labour left, offers a space to host the discussion. We open it with this interesting piece by Sabrina Huck, and welcome submissions of alternative points of view. – Hilary Wainwright

Since the British left was defeated at the ballot box in December – and subsequently in the Labour Party – Labour members have wrestled with the pros and cons of remaining in the party. Some argue that with Sir Keir Starmer at the helm, there is little chance that Labour offers a political platform that will advance socialist politics come the next election – so time and energy would be better spent in extra-parliamentary struggles, the union movement or other social justice movements. On the other side of the argument, comrades urge committed socialists to remain in the Party to put pressure on the new leadership, vote for left-wing candidates in internal elections and fight battles at a local level.

Remaining in Labour forms part of the logic of a democratic socialist strategy that believes that the two elements of the labour movement – the social-democratic/socialist political party in government and the trade unions – can gradually move us towards socialism. Those who currently hold power within existing institutions – including in the Labour Party itself – are seen as some of the biggest obstacles to the democratic socialist strategy . This is why so many socialist activists in Labour spent a large chunk of the past four years of Corbyn’s leadership fighting battles on local and national level to win over positions in constituency parties or to select left-wing candidates.

Those advocating for a democratic socialist strategy often invoke terms like ‘in and against the state’ or ‘the long march through the institutions’ to describe how left-wingers must ‘take over’ and truly democratise the Labour Party and, then, the institutions of the state (the government and civil service).

But this interpretation of  the ‘long march’ is slightly misconstrued. The term was coined in Germany during the 1960s student movement at the height of the extra-parliamentary opposition, and whilst it advocates for an insertion of socialist activists in institutions of the mainstream, it does not see these institutions as reformable or worth preserving.

In November 1967 Rudi Dutschke, leader of the German extra-parliamentary opposition (Ausserparlamentarische Opposition – APO), debated the revolutionary potential of the student movement on a panel in Hamburg alongside Rudof Augstein – a prominent German journalist who co-founded the news magazine Der Spiegel – and sociologist Ralf Dahrendorf. Arguing about how to force a revolutionary break in society, Dutschke said:

‘Revolution is not a short act, where something suddenly happens and then everything is different. It’s a long, complicated process, in which human beings must change.’

Dutschke went on to explain that this process of change will be facilitated through a ‘long march through the existing institutions’. He described it as a process of education and direct action that must take place to elevate political consciousness within and outside of these institutions to increase the number of a critically-thinking minority in society. Through this process of education and direct action, the movement will create a ‘counter public’ (Gegenöffentlichkeit) that pushes the limits of discourse inside and outside these institutions to force further consciousness-raising. Gegenöffentlichkeit refers to the creation of a praxis that conveys political and societal views and norms that are either misrepresented or not at all considered in the existing public sphere and that cannot be otherwise conveyed through the existing institutions, especially the mainstream or mass media.

The process of consciousness-building is derived from an engagement in direct struggle against the existing order and the state – a permanent process of learning that leads to a widening and deepening of the understanding (and frustration) of the deficiencies of the currently dominant social, political and economic order. This forms part of a continuous process of changing one’s own character (as our character is reflective of repressive and authoritarian structures in which we were raised) to re-educate society to live in a fundamentally different way.

The long march is not a reformist strategy precisely because its end goal is the abolition of the existing structures and the institutions that reproduce them. It is a process of working politically from within, but by pushing boundaries through agitation not negotiation, whilst simultaneously creating a counter-public sphere. Existing institutions are perceived as a tool that offers access and resources to reach out to the public, but if the strategy is successful, they should be dissolved.

Labour members who see the party as the first arena of struggle for an alternative society will have spent incredible energies on trying to ‘take it over’. But our future battles should not be on fighting for individuals to take up positions of power within Labour.

On the question of the political party, Dutschke evoked the thought of Marcuse and Lukács: he believed that the left-wing intellectual avant-garde will always be a minority in the dominant culture. Therefore their natural coalition to create an alternative society are the oppressed classes and minorities excluded from the mainstream. The Social Democratic Party, instead of realising the potential of this coalition, would forever make the same mistake in its pursuit for state power: whenever there was a crisis of the existing state structure, the social democrats would prop up a coalition of the centre to steady the ship.

Some in the APO therefore believed that there was little hope the SPD would reach this coalition of critically minded citizens. Instead, there should be a new party capable of (and willing to) appeal to these sections. Some alumni of the ‘68 generation eventually found themselves in the German Green Party – including Dutschke himself who joined the Bremen Greens branch in 1979, shortly before his death.

Rather than taking over Labour in order to win elections and take over the bourgeois democratic state, we should see the party as a platform to agitate and educate from. Education is the people’s instrument of emancipation: if we understand how the structures around us work, we can gradually intervene in societal processes. Our actions should be planned interventions to expose the nature of the oppressive state and the capitalist economic system.

Beyond a Labour Government

For the Labour Party to be a useful instrument we cannot shy away from arguments within the party for the sake of ‘unity’. If the party at present captures the constituency in British society that is most interested in socialist change, then focusing on mobilising them to consolidate a critically minded group must remain our main goal. A focus on internal battles is a distraction from this more important task.

The Labour Party should be viewed as a catalyst that can equip us with skills, resources and people to work towards building an alternative public sphere and erecting the counter institutions that support it. Labour can then be abandoned at a later stage when counter institutions have been established that mean that activity within Labour is no longer necessary. Socialists should work towards building these alternatives rather than simply wait and hope for a Labour government.

Sabrina Huck is a LabourList columnist and freelance writer, Momentum member and organiser for the Labour Campaign for Free Movement. Follow her on Twitter here.