In PA, the Corporation Does Not have Natural Personhood - Democracy Is Coming? To The USA 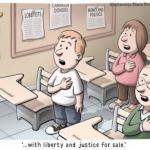 When Judge Debbie O'Dell-Seneca, recently directed a corporate "fracking" combine in Western Pennsylvania to unseal the terms of a settlement with citizen-plaintiffs, she struck a clear blow for the public's right to know.   But far beyond the borders of Washington County PA, her ruling is being celebrated by a national movement working to reverse 127 years of law that gave corporations the constitutional protections of real human beings.
Her decision echoed language as old as that used when corporations were judged subservient to citizens and as new as the slogans of the "occupy" movement.
Judge O'Dell-Seneca observed that the Pennsylvania state constitution says men and women come into this world with "certain inherent and indefeasible rights' and continued that,

"There are no men or women defendants in the instant case; they are various business entities" legal fictions, existing not by natural birth but by operations of state statutes"Such business entities cannot have been " born equally free and independent,' because they were not born at all. Indeed, the framers of our constitution could not have intended for them to be " free and independent,' because, as the creations of the law, they are always subservient to it.

The various states" allow for business entities to exist but are not required to establish them. In the absence of state law, business entities are nothing. Once created, they become property of the men and women who own them, and, therefore, the constitutional rights that business entities may assert are not coterminous or homogeneous with the rights of human beings.   Were they so, the chattel would become the co-equal to its owners, the servant on par with its masters, the agent the peer of its principals, and the legal fabrication superior to the law that created and sustains it."
Two western Pennsylvania newspapers, the Pittsburgh Post-Gazette and the Observer-Reporter petitioned the court to unseal the terms of an agreement that settled a suit brought by a Washington County family against Range Resources Corp., Williams Gas/Laurel Mountain Midstream, MarkWest Energy Partners, L.P. and MarkWest Energy Group, L.L.C.   Stephanie and Chris Hallowich were awarded $750,000 for damages caused by the companies' fracking operation.
Judge O'Dell-Seneca was careful to highlight how corporations are treated differently by federal and state constitutions, by tracing Pennsylvania's back to the original 1776 version: (parens added)
"Had the framers intended the protections of Article I, - 1 (the inherent rights of mankind) to extend to business entities, they certainly could have written, "All persons are created equally free and independent ... .' They did not. Indeed, it is federal Amendment XIV's use of the word " person' that makes its protections applicable to business entities, because its drafters were presumed to have known that " person' is a legal term of art, encompassing business entities under the common law.   This was so clear that Chief Justice Waite ruled, prior to oral argument, that:
"The court does not wish to hear argument on the question of whether the provision in the Fourteenth Amendment to the Constitution, which forbids a State to deny to any person within its jurisdiction the equal protections of the laws, applies to these corporations.   We are all of the opinion that it does.'   Santa Clara County v. Southern Pac. R. Co., 118 U.S. 394, 6 S.Ct. 1132 (1886).
Critically, the exact opposite conclusion is derived from plain language of Article X of the Constitution of the Commonwealth of Pennsylvania.   It provides, in pertinent part:
- 2. Certain Charters to Be Subject to the Constitution
Private corporations which have accepted or accept the Constitution of this Commonwealth or the benefits of any law passed by the General Assembly after 1873 governing the affairs of corporations shall hold their charters subject to the provisions of the Constitution of this Commonwealth.
- 3. Revocation, Amendment, and Repeal of Charters and Corporation Law
All charters of private corporations and all present and   future   common   or statutory law with respect to the formation or regulation of private corporations or prescribing powers, rights, duties or liabilities or private corporations or their officers, directors or shareholders may be revoked, amended or repealed.
Thus, the constitution vests in business entities no special rights that the laws of this Commonwealth cannot extinguish.   In sum, Defendants cannot assert the protections of Article I, - 1, because they are not mentioned in its text."
In a footnote, O'Dell-Seneca added,

Elsewhere in her Opinion and Order, the judge quoted a 1687 document by William Penn, holder of the royal charter that founded the state, in which Penn examined notions of liberty addressed in England's Magna Charta.    O'Dell-Seneca noted that, "...nothing in his writings on liberty suggests that Penn thought that those rights inured to businesses."
Gradually, beginning in the late 1800's, the U.S. Supreme Court helped corporations usurp all manner of "Bill of Rights" protections that were initially intended only for living, breathing humans, such as free speech and equal protection.
Since 1992 there has been a growing movement to expose that hidden history and find ways to return corporations to shorter leashes that once held them subservient to the people who created them.
Based on research and writing done by Richard Grossman and Frank Adams in "Taking Care of Business: Citizenship and the Charter of Incorporation," the Program On Corporations, Law and Democracy started publishing and convening scores of weekend retreats across the country to spread the gospel of citizen sovereignty and discuss practical ways to breathe more life into democracy.
Out of that effort, the Community Environmental and Legal Defense Fund began to explore a "rights-based" approach to organizing against corporate factory-farms in southeastern Pennsylvania that relied citizen sovereignty, not environmental regulations, to secure a better quality of life.   Activists in California and soon elsewhere experimented with new ways to kick corporate money out of elections, pass local resolutions against corporate "personhood." and more recently, fight natural gas "fracking."
Today, MoveToAmend.org is consolidating that experience and energy into a national movement to put forward a U.S. Constitutional Amendment that would end the twin, destructive fantasies that a) money is the same as speech and b) corporations are persons.
David Cobb, spokesperson for the MoveToAmend.org  coalition welcomed Judge O'Dell-Seneca's decision.
"The courts once held that indigenous people had no rights, that enslaved Africans had no rights, that women had no rights, that immigrants had no rights, that LGBT people had no rights.  It took mass movements to correct these injustices and it will take another mass movement to abolish utterly and completely the legal doctrine that allows a corporation to claim to be a person with constitutional rights. Fortunately, that movement exists and is growing daily.  I applaud the lawyers, the judge, and the organizers on the ground who helped make this decision the first of many to follow."
The "corporations are not persons" argument gained considerable traction when the Occupy movement declined to separate its grievances into a laundry list of single issues and instead declared that America's central problem is corporations, not people, are running the show.
The combination of citizen organizing and increased awareness on the part of judges and attorneys promises to return to common usage the language that courts once used to keep corporations subservient; language such as that found in decisions from Ohio and New York:
"Corporations have such powers, and such only, as the act creating them confers; and are confined to the exercise of those expressly granted, and such incidental powers as are necessary for the purpose of carrying into effect powers specifically conferred."
Elias Straus and Brother v. The Eagle Insurance Company of Cincinnati, 5 OS 60 (1855) Ohio Supreme Court
"The corporation has received vitality from the state; it continues during its existence to be the creature of the state; must live subservient to its laws, and has such powers and franchises as those laws have bestowed upon it, and none others. As the state was not bound to create it in the first place, it is not bound to maintain it" if it violates the laws or public policy of the state, or misuses its franchises to oppress the citizens thereof."
The State ex rel. v. The C.N.O. & T.P. Ry. Co., The State ex rel. v. The C.W. & B. Ry. Co., 47 OS 130 (1890) Ohio Supreme Court
"The judgment sought against the defendant is one of corporate death. The state which created, asks us to destroy" The life of a corporation is, indeed, less than that of the humblest citizen... The abstract idea of a corporation, the legal entity, the impalpable and intangible creation of human thought, is itself a fiction, and has been appropriately described as a figure of speech.... the defendant corporation has violated its charter, and failed in the performance of its corporate duties, and that in respects so material and important as to justify a judgment of dissolution.... Unanimous."
NY State Court of Appeals, People v North River Sugar Refining Co., 24 N. E. 834 (1890)
[Mike Ferner is a writer from Ohio, former president of Veterans For Peace and author of "Inside the Red Zone: A Veteran For Peace Reports from Iraq." (Praeger)]
Source URL: https://portside.org/2013-04-17/pa-corporation-does-not-have-natural-personhood-democracy-coming-usa